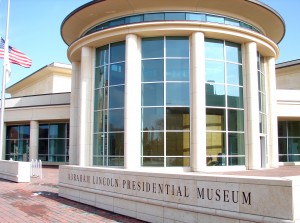 In honor of Abraham Lincoln (Born: February 12, 1809 Died: April 15, 1865) and President’s Day in February, I would like to share some of the historic places we have visited in Springfield, Illinois.  Over the last twenty years, we have made several road trips to Springfield.  Three places mentioned are within walking distance from each other.  They are the Lincoln Presidential Library and Museum, the old State Capitol building, and the Lincoln-Herndon Law Offices.  The other two sites, the Lincoln Home and the Lincoln Tomb, are within any easy drive from downtown Springfield.

The Lincoln Presidential Library and Museum is a great place to start a visit to Springfield.  Here you can learn about Abraham Lincoln’s life and his time as the 16th President of the United States.  There are actually three separate buildings that comprise the Lincoln Presidential Library and Museum complex.  The old Union Station Depot serves as the Visitor Center. The Library opened in 2004, houses the largest archive of papers and artifacts on Lincoln and also an extensive collection on the history of the state Illinois.  Originally founded in 189, the Library started as the Illinois State Historical Library and members of the staff maintain the papers, books and artifacts of the Lincoln Library collection.  The Museum opened in 2005 and has several state-of-the-art advanced technology exhibits which tell the Lincoln story. 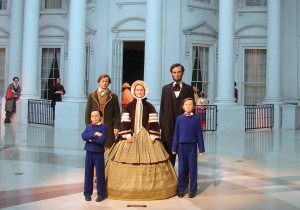 I would advise visitors to start their tour with the Ghosts of Library.  Shown in a theatre is a dramatic presentation where visitors are allowed a peak into the “library” to learn about the activities and discoveries researchers are being made in the presidential archives while the ghost of Lincoln and others seem to walk amongst them.  The presentation ends in a very dramatic way.

As visitors return to the Plaza after the presentation, to the left is the exhibit called “Journey One – The Pre-Presidential Years”.  The area is beautifully decorated with a log cabin surrounded by a forest with the figure of a 9 Year old Lincoln sitting on a tree stump.  Visitors enter through the log cabin into an exhibit which depicts Lincoln’s early life before he became President. 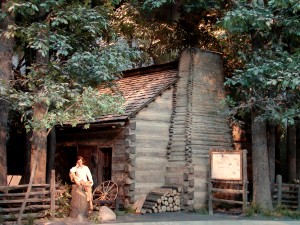 The Union Theatre is another state-of-the-art multi-media theater that features a presentation called “Lincoln’s Eyes”.  Lincoln’s story is told by a portrait artist and through the eyes of Lincoln we learn and understand the feelings of hope, sorrow and forgiveness which explains the personal and political issues that surrounded Lincoln’s Presidency.  SPECIAL NOTE: To advise parents visiting with small children – the dramatic Civil War battle scene sights and sounds can be very intense.

After viewing the presentation, visitors exit onto the Plaza.  Entering through the doors of the White House façade is the exhibit called “Journey Two – the White House Years”.

Visitors find themselves in the “Blue Room” of the White House where Mrs. Lincoln is being fitted for an elaborate gown by her dressmaker.  As visitors continue through the various displays they learn about Lincoln’s Presidency as well as both the personal and political events that effected his family’s time in the White House.

Additional areas and exhibits at the Lincoln Museum include: The Illinois Gallery which features an ever-changing series of exhibits pertaining to Lincoln and the state of Illinois.  Mrs. Lincoln’s Attic which is an inter-active area for children where there are numerous hands-on activities such as dressing in Lincoln’s suit, Mrs. Lincoln’s dress or a Civil War soldier’s uniform.  Please note children must be accompanied by their parents.

There is also a wonderful museum gift store and a restaurant to grab a quick lunch.  It is very easy to spend several hours at the museum but I guarantee you and your family will enjoy the exhibits, learn important history lessons and come away with a better understanding and appreciation of Abraham Lincoln.

For more travel information regarding the Abraham Lincoln Presidential Library and Museum please refer to their web site, www.alplm.org