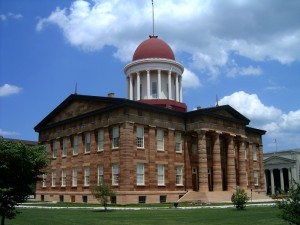 In honor of Abraham Lincoln (Born: February 12, 1809 Died: April 15, 1865) and President’s Day in February, I would like to share some of the historic places we have visited in Springfield, Illinois.  Due to the numerous Lincoln historic sites in Springfield, I have divided the content into two separate posts.  The first post, Springfield, IL (Part One), covers the Lincoln Library and Museum.  The Lincoln Library and Museum are located within walking distance from two additional Lincoln historic sites, the old State Capitol building, and the Lincoln-Herndon Law Offices.  This second post, Springfield, IL (Part Two), covers the old State Capitol, the Lincoln-Herndon Law Offices and also the Lincoln Home and the Lincoln Tomb which are located within any easy drive from downtown Springfield.

Built on Springfield central town square, the Greek Revival-style building was constructed from local yellow Sugar Creek limestone.  When Lincoln was a lawyer, he tried many cases before the Illinois Supreme Court.  In 1858 he delivered the famous “House Divided” speech in Representatives Hall when he was campaigning for the U.S. Senate.  Lincoln lost the Senate race to Stephen Douglas but two years later he was nominated and won the Presidency of the United States.  Sadly, four years later he was assassinated and Lincoln’s body returned to the Capitol building to lay-in-state before his burial in Oak Ridge Cemetery.

By the 1870s the building was becoming too small for the growing Illinois State government.  The current State Capitol was built four blocks to the southwest and the Old State Capitol became the local county courthouse.  From 1966–69, preservation work was done on the building and it was restored to how it appeared in 1861 when Lincoln left for Washington D.C.

For travel information on the old state capitol please visit their website at  www.illinoishistory.gov/hs/old_capitol.htm. 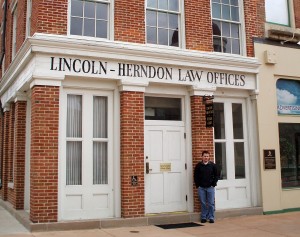 In 1844 when Abraham Lincoln’s first law partner Stephen Logan left the firm, Lincoln hired a junior partner named William Herndon.  Lincoln and Herndon prepared cases for the Federal courts and the Illinois Supreme Court as well as the Illinois Eight Judicial Circuit.  Lincoln rode the circuit for about six months during the year while Herndon usually stayed in Springfield.   The site of their original law office, from 1844 to 1852, was a very convenient location given the fact that most of their cases met in the State Capitol across the street.  In 1852 their office was moved to another location near the town square in a building that has since been demolished.

Written after Lincoln’s death, Herndon’s Lincoln biography describes his law partner’s habits as disorganized and chaotic with Lincoln’s two mischievous and very loud young sons visiting often.  Another annoying habit of Lincoln’s, one that constantly disturbed Herndon’s concentration, was that sitting sprawled across the office’s old sofa, Lincoln would read aloud from his newspapers or books.  A curious trait from his boyhood, when as a young boy he would read aloud from his books while sitting in front of the fireplace in the family’s log cabin, it seems that this was the only way that Lincoln ever read.

The partnership of Lincoln-Herndon was never officially dissolved at the time that Lincoln became President and left Springfield for Washington D.C.  He is reported to have told Herndon, “If I live I’m coming back some time, and then we’ll go right on practicing law as if nothing had ever happened.”

In 1872, at the time that the old brick building was being torn down, the wise decision was made to preserve that section of the building where the original Lincoln-Herndon law offices were located on the third floor.  In 1985, over a hundred years later, the building became an Illinois State Historic Site.

For more information on the Lincoln-Herndon Law Offices see www.illinoishistory.gov/hs/lincoln_herndon.htm. 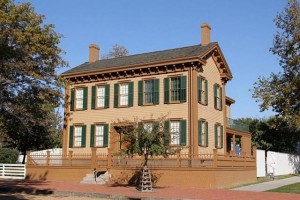 Abraham Lincoln, coming from very humble beginnings, believed in the American dream that everyone should have an opportunity to improve their economic and social condition.  With that in mind, in 1844 Lincoln purchased the only house he would ever own.  It was a small house located a short distance from his law offices in downtown Springfield.  In 1856, the house was enlarged to include the second floor to accommodate Abraham and Mary’s growing family of four boys. While Lincoln was campaigning for President, the house became a place for numerous visitors and political gatherings.  After winning the election and becoming the 16th President of the United States, the house was the site of a grand farewell reception.  Before leaving for Washington D.C. in 1861, the Lincolns put the house up for rent and sold most of their furnishings.

After Lincoln’s tragic death, Mary never returned to live in their Springfield home and moved instead to Chicago with her two remaining sons, Robert and Tad.  When Robert married in 1868, Mary and Tad went to Europe on an extended trip aboard, Tad died in 1871. Mary’s mental health, always questionable, rapidly deteriorated and Robert became increasingly concerned.  In 1875, with Robert’s urging, the courts declared Mary insane and she was sent to the Bellevue Nursing Home in Batavia, Illinois.  This news shocked the nation and Robert and his mother became estranged.  A few months after being committed, she was released into the care of her sister in Springfield. Quickly the courts ruled that she had regained her sanity.  Mary traveled to Europe and stayed mainly in France to visit various health spas.  In 1880, she returned to Springfield for the final time, once again living with her sister.  Mary’s physical health was declining from undiagnosed diabetes and complications.  Robert was able to reconcile with his mother before she died in 1882 at the age of 63.

In 1887, Robert Lincoln donated the family home to the State of Illinois with the stipulation that the house would be well-maintained and opened to the public at no charge.  In 1960, the home was designated a National Historical Landmark.  In 1971, the home and adjacent four block residential area became a National Historical Site and administrated by the National Park Service.  Guided tours for the Lincoln Home are free and the timed tickets are available at the Visitor Center.

Additional information can be found at the National Park Services web site at www.nps.gov/liho/index.htm.

After Abraham Lincoln’s death in 1865, a group of Springfield citizens immediately sought permission from Mary Lincoln to arrange not only the funeral and burial but also to raise funds to build a memorial to honor the 16th President at Oak Ridge Cemetery.  A funeral train consisting of nine special railroad cars carried the body of Lincoln back to Springfield, Illinois.  Mary remained in Washington D.C., too distraught to make the trip. The funeral train took a northern route leaving Washington D.C. with stops in Baltimore, Philadelphia, New York, Albany, Buffalo, Cleveland, Columbus, Indianapolis, and Chicago, before finally arriving in Springfield 19 days after the night of the assassination and having traveled almost 1,700 miles.  Once the funeral train arrived in Springfield, Lincoln’s coffin was transferred to the Illinois State Capitol where it lay-in-state for one night.  After the funeral the coffin was placed into a receiving vault, then as construction began on the tomb and memorial it was moved to a temporary vault further up the hill.  Over the next 30 years, the coffin was moved 15 more times, almost stolen in 1876, before Lincoln eventually reached his final resting place in 1901.

The Lincoln Tomb is in the center of a 12 acre plot in Oak Ridge Cemetery.  The rectangular base of the memorial is made of granite with a 117 foot obelisk and a semicircular entrance way. Four separate flights of stairs exit onto an elevated terrace.  This terrace area is now closed to the public for safety reasons.  On the walls of base for the obelisk are 37 stone shields with the names engraved of the states at the time of Lincoln tomb was built.  The shields are connected by raised bands symbolically representing an unbroken circle and the reunited states after the Civil War.  Four bronze statues representing the infantry, navy, artillery and cavalry are placed at each corner of the base. 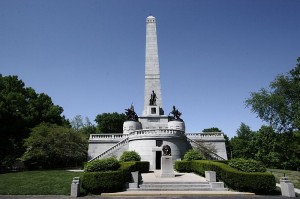 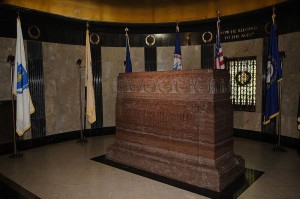 Entering the interior of the memorial, there is a rotunda, a burial room and connecting corridors.  The first room is the rotunda which serves as an entrance foyer.  As visitors enter the rotunda there is a small replica of the Lincoln Memorial statue located in Washington, D.C. and this dominates the entrance foyer.  Around the room 16 marble columns are separated by marble panels.  The columns represent Lincoln and the 15 presidents who preceded him.  Corridors from the rotunda lead to the burial room at the rear of the memorial.  Located along the corridors are a series of eight statues depicting various times of Lincoln’s life.  In the center of the burial room stands red marble cenotaph engraved with Lincoln’s name, the years he lived and on the wall behind is the inscription “Now he belongs to the ages”.  (A cenotaph is an “empty tomb” or a monument erected in honor of a person whose remains are elsewhere.  In the case of Lincoln – he is actually buried in a cement vault 10 feet below the surface of the burial room.)  Along the south wall of the burial are four crypts containing the remains of Mrs. Lincoln and three of Lincoln’s four sons: Edward, William (Willie) and Thomas (Tad).  Their eldest son, Robert, is buried in Arlington National Cemetery just outside of Washington D.C. 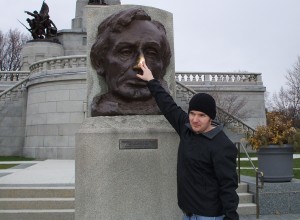 TRAVEL NOTE:  At the front of the Lincoln Tomb there is a bronze statue of Lincoln’s head. This statue was done by Gutzon Borglum, the man who is famous for Mount Rushmore.  You will notice from the photo to the right that shows my son, visitors often stop to rub the nose for good luck.

For more information on the Lincoln Tomb and War Memorials please refer to the Illinois Historic Preservation Agency website at www.illinoishistory.gov/hs/lincoln_tomb.htm.

For additional Abraham Lincoln sites and landmarks in other parts of the United States, please click on the link to New Salem, IL for information about where Lincoln lived during his early adult years and the Lincoln Memorial which is located in Washington, D.C.