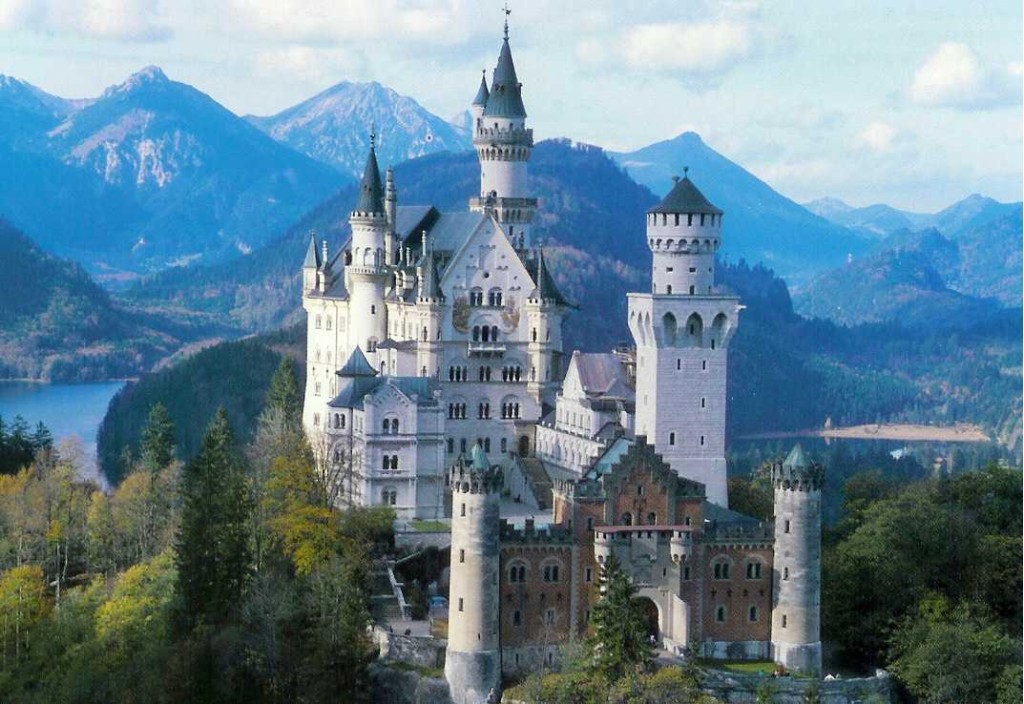 My son and I were fortunate to see Neuschwanstein Castle when we were on a trip to Germany in 1998.  King Ludwig’s Neuschwanstein is a 19th century fairytale castle located on the hill above the small village of Hohenschwangau, near Fussen in southern Germany.  We were on a bus tour of this beautiful region known as Bavaria that originated from Munich.  The tour took us first to Linderhof, one of King Ludwig’s smaller palaces, then on to a brief shopping visit to Oberammergau which is famous for their woodcraving, beautifully painted houses and the Passion Play.  The final stop and the highlight of the tour was Neuschwanstein Castle and it was an enchanting experience and very exciting for this Disney fan to see the actual castle that was the inspiration for Disneyland’s Sleeping Beauty Castle in Anaheim, CA.

A Brief Histoy of Neuschwanstein Castle

In the Middle Ages there were three castles near the village of Hohenschwangau, which is located at 2,620 feet elevation near the border of Germany and Austria.  Schwanstein Castle was located nearest the village and on the hill overlooking were twin castles known as Vorderhohenschwangau Castle and Hinterhohenschwangau Castle.  Over the centuries all three castle fell into ruins.  Then, in 1832 King Maximilian II began to build a new castle known as Hohenschwangau Castle near the ruins of the Schwanstein Castle.  By 1837 the palace was completed and became the summer residence of the King and his family.  In 1864 King Maximillian died and his eldest son became King Ludwig II.  Ludwig was only 19 years old when he became king of Bavaria and he was a very shy and introverted man who spent his childhood exploring this area of southern Germany.

Several years later, Ludwig wanted to build a secluded personal refuge and he decided on the area where the twin castles once stood.  The building design was drafted by the stage designer Christian Jank and the King insisted on control over all aspects of the palace and is largely regarded as his own creation rather that the architects involved.  The foundation stone for Neuschwanstein Castle was laid in 1869.  Over 200 craftsmen were employed with additional 100 workers at different times in order to meet the King’s specific deadlines for the construction of the palace.  The materials used for the construction of the palace were approximately white limestone for the exterior walls, sandstone for the portals and Salzburg marble for the arched window frames and columns.  Transportation of these materials was difficult due to the site located on the steep hill, cranes and scaffolds were also needed during the construction.  In 1884, the King moved into the still unfinished palace to oversee the completion of the construction and the final interior details.  Ludwig only spent six months at his beloved Neuschwanstein before he died under mysterious circumstances in the water of Lake Stanberg new Berg Castle in 1886 at the age of 40 years old.

The exterior of Neuschwanstein Castle is designed in the Romanesque style of architecture and the building has numerous towers, turrets, gables and balconies.  Built on the hill above the village of Hohenschwangau with the Pollat Gorge to the south and the foothills of the Alpine mountains and lakes to the north, the palace’s setting offers many picturesque views in all directions.  Neuschwanstein was intended to be King Ludwig’s private residence and the interior design is based on the German legend of Lohengrin or the Swan Knight as immortalized in the operas of Richard Wagner and his music was very inspirational in the design of the palace.

At the time of Ludwig’s death, only 14 finished rooms of the palace were completed and furnished.  The original 65,000 square feet floor plan was designed with more than 200 rooms with the majority of those rooms intended as guest and servant accommodations.  The largest room of the palace is the Hall of Singer’s which is 89 feet by 33 feet and is located in the east wing of the palace.  The Hall was designed with a stage at the far end but was never intended for court entertainment of the reclusive King.  No performance was held in the room until 1933 when there was a concert performed to commemorating the 50th anniversary of Richard Wagner’s death, he never lived to Neuschwanstein. 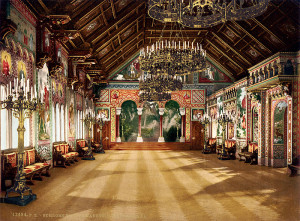 The Throne Room measures 66 feet by 39 feet with a 43 feet high ceiling takes up the space of the third and fourth floors and is located in the west wing of the palace.  At the request of King Ludwig, this Byzantine style room is designed to incorporate the symbols of unrestricted sovereign power and the divine right of kings.  Hanging overhead is a chandelier in the shape of a Byzantine crown and at the far end of the room is a dais but is without a throne since King Ludwig’s throne was not finished at the time of his death.  The walls surrounding the dais have paintings of Jesus and the twelve apostles and also portraits of six canonized kings: Saint Louis of France, Saint Stephen of Hungry, Saint Edward the Confessor of England, Saint Wenceslaus of Bohemia, Saint Olaf of Norway and Saint Henry the Holy Roman Emperor. 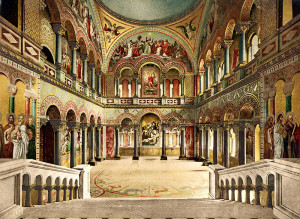 King Ludwig’s bedroom suite is in contrast to the other rooms in the palace and is decorated in a Neo-Gothic style.  It took 14 woodcarvers 41/2 years to complete this room; the bed is crowned with the intricate woodcarvings and covered with embroidered draperies.  The wall painting is “Tristian and Isolde” a story from one of Wagner’s operas.  The adjacent dressing room is completely paneling in oak and the painted trellis on the ceiling gives the impression that the room is open to the sky. 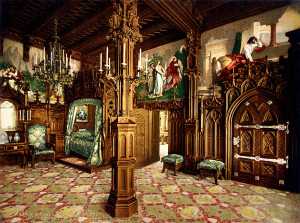 The Living Room is completely inspired by the legend of the Swan Knight, Lohengrin, which had significant meaning and held great importance to Ludwig.  In this room there is a mural called “The Miracle of the Grail”, the Grail King was a medieval legend of a pauper that had risen to become King because of his pure soul and he achieved this success by overcoming sin and winning his inner battles.  Ludwig’s obsession with the Grail King is very understandable when looking at his diaries indicate that he also suffered with deep inner turmoil in repressing his homosexuality.  Another mural in the room is called “The Arrival of Lohengrin in Antwerp” is important given that the young prince Ludwig was so overwhelmed by Wagner’s opera Lohengrin that he considered the opera a form of enlightenment.  Ludwig was a recluse and completely identified himself with the Swan Knight whose tragic downfall was his overwhelming loneliness that he frequently dressed as the character.  Neuschwanstein means “New Swan Stone” and King Ludwig II is still thought of today as the “Swan King”.

TRAVEL NOTE:  The tour ticket is valid only for a specific date and time and be advised that it takes awhile to reach the castle at the top of the hill.  If you have purchased tickets online, please arrive at least 1½ hours before your reserved time to allow for travel up to the castle entrance.

Walk:  A strenuous hike from the village at the bottom on the hill up to the castle at the top can takes about 45 minutes to an hour.  A hike down the hill after the tour is a great way to see the beautiful views across the way to Hohenschwangau Castle with the village down below and also Alpsee Schansee, a picturesque lake located on the other side of the castle.

Bus:  There is fee for the bus and will depart from in front of the Schlosshotel in the village.  Visitors will ride up the hill to a stop near Jugend lookout and Marienbrucke.  From the bus stop there is still a strenuous and steep path which will take visitors about 15 minutes to reach the castle entrance.

TRAVEL TIP: Be sure to take a moment to look at the lovely view of Neuschwanstein and the Pollat Gorge before walking to the castle entrance.  The location at the Maienbrucke (or Mary’s Bridge) is a wonderful vantage point for pictures of Nesuchwanstein and the waterfall below the bridge.

Horse-drawn carriage:  There is a fee for the carriage ride and will depart from in front Hotel Muller in the village, then from the carriage stop it is a shorter walk to the castle entrance.  (If you can afford this mode of transportation is can be a wonderful way to travel up the hill to the castle)

TRAVEL NOTE:  The castle tour can be strenuous for visitors, please be advised the tour will covers 5 floors of the castle, 165 stair steps upstairs and 181 stair steps downstairs.  Call ahead to inquire about special arrangements made for the disabled persons using a wheelchair or walker.

For more information regarding times, prices, etc check out the Neuschwanstein website, www.neuschwanstein.de

Neuschwanstein Castle and the Disney connection

When Walt started the construction of the Disneyland theme park in Anaheim, CA he wanted something at the end of Main Street to draw his guests into the park.  At the time the Disney animated film “Sleeping Beauty” was about to be released and Walt thought a fairytale castle would be the perfect solution.  The castle they built as the entrance to Fantasyland is called the Sleeping Beauty Castle and it was one of the first buildings to be completed for the new theme park that opened July 17, 1955.

Sleeping Beauty Castle has been noted to be a composite of the architecture of French and Bavarian castles which were originally built during the Middle Ages.  But in actuality the inspiration for the Disneyland castle is a place Walt Disney and his wife Lillian visited many years before on a European vacation, Neuschswanstein Castle in Germany.  The resemblance between the two castles is uncanny and the architectural features are undeniable.