Today is President William Jefferson Clinton’s birthday, he was born on August 19, 1946, and I thought it was a good time to share our trip to the Clinton Presidential Library and Museum located in Little Rock, Arkansas.  On our annual road trip back from California, we took the southern route across the United States and made stops at the Grand Canyon, Tucson, Little Rock and Memphis before heading north to go home.  When traveling across the country we always love to stop at the presidential libraries along the way and we have been to several of them – it doesn’t matter if the president was a democrat or republican – it is always a little history lesson!!  We loved Little Rock and the people were extremely friendly and very proud of this revitalized area of Little Rock.  (If you are interested, please check the January 2013 Travel post on Elvis Presley’s Graceland – Memphis, TN from the same road trip!)

The William J. Clinton Presidential Center is located in Little Rock near the Arkansas River and is home to the Clinton Presidential Library and Museum, the Little Rock offices of the Clinton Foundation and the University of Arkansas Clinton School Of Public Service.  When the Center opened in 2004, it brought more than $2.5 billion in economic development and renovations to the area located hear the historic River Market district.  The Presidential Library has the largest archival collection of any American President and features 20,000 square feet of museum exhibit space including a recreation of the White House Cabinet Room and a full scale replica of the Oval Office.  In speaking with the docent at the Library he told us that President Clinton visits the facility frequently when he is in Little Rock, in fact we missed seeing him there by only a few days!

After entering the Library there is usually a small revolving exhibit on the ground floor, when we visited it had several of Elvis Presley’s cars which was great because our next stop on our trip after Little Rock was Graceland – Memphis, TN.  On the ground floor there is a permanent exhibit of the Presidential limousine used during the Clinton Administration. 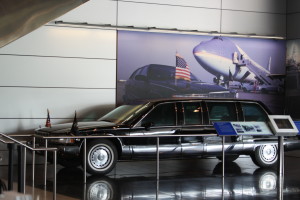 Before proceeding to the second floor we purchased audio guides for each member in our group for a small fee, $3.  The audio tour is narrated by President Clinton and there are numbered stations throughout the Library and visitors simply enter the corresponding number to hear the information regarding a specific exhibit.  Also available for visitors are free one-hour “An American Presidency” tours offered three times a day with a paid admission, no reservations are required and check at the ticket counter for more information regarding the specific times.  Volunteers are also stationed throughout the Library to answer any questions.  While we were at the Special Services counter we also picked up the “Ideas Matter Youth Scavenger Hunt” which is a special self-guided children’s tour where they learn about the Library and search for areas marked by gold eagle coins, it was a fun activity for our 12 year old daughter and keep her busy during our visit.

In a small theater on the second floor there is an orientation film about President Clinton’s years in office.  Behind the theater is a large exhibit hall which has different changing exhibits, check ahead on the Library’s website to see what will be on exhibit at the time of your visit.  In front of the theater is an area with a recreation of the White House Cabinet Room.  This room in the West Wing of White House has been used since 1902 as the place where the President, Vice-President, the various cabinet secretaries and other officials gather to make the choices that affect our country’s future.  In a position of honor at the center of the table is the tallest chair, with a brass plaque marked “Mr. President”.  (Of course everyone has to sit in the President’s chair!)  On the walls surrounding the room, President Clinton had selected portraits of Thomas Jefferson, Abraham Lincoln and Theodore Roosevelt and, his personal favorite, George Washington. 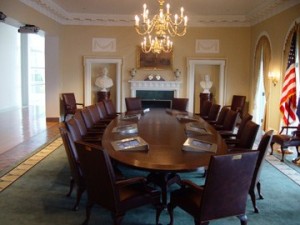 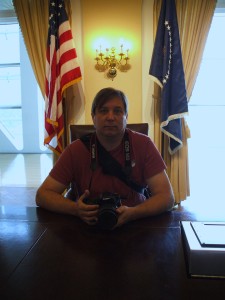 My favorite section of the Library was the 110 foot freestanding interactive timeline panels, starting from 1993 to 2001 representing the years of the Clinton administration.  Each individual year panel gives information regarding the events of that particular year ranging from natural disaster, scientific breakthroughs and military conflicts as well as events regarding sports to music.  Also in this section are 13 “policy alcoves” which explain specific policies of the Clinton administration. Architecturally and visually this area of the Library is very well-done and extremely informative. 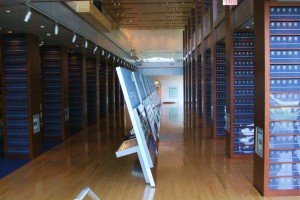 On the third floor of the Library is a section with exhibits that explain the Clinton’s life in the White House and displays concerning special state events and holiday celebrations throughout the years.  Also included in this section are several rotating exhibits displaying state gifts received during the Presidential years and personal memorabilia of the Clinton family. 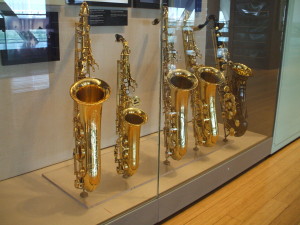 The highlight of the third floor is the full-sized replica of Clinton’s Oval Office; this room is decorated with the furnishings and decorations that were used during the years of his administration.  The original Oval Office in the White House was created in 1909 when President Taft built the West Wing.  In 1934 President Franklin Roosevelt had the room moved to its present location in the southwest corner of the West Wing.  My favorite piece of furniture in the room is the Resolute desk which is a 19th century desk used by many past presidents.  Originally it was a gift from Queen Victoria given to President Rutherford Hayes in 1880 and is built from the timbers of the British Arctic Explorations ship the “Resolute”.  Since them many presidents have used the desk at various locations in the White House and President Franklin Roosevelt added a small door built to prevent people from seeing his wheelchair.  It was first brought to the Oval Office in 1961 for President Kennedy and after his assassination it was used in a traveling exhibition to raise funds for the Kennedy Presidential Library and then put on display at the Smithsonian Museum in Washington, D.C.  President Jimmy Carter brought the desk back to the Oval Office where every president has used it since then.  (My memory of the Resolute desk is the iconic photo of little John-John Kennedy peeking out underneath from the door of the desk.  Of course, if you have see the 2007 movie “National Treasures 2 – Book of Secrets, you will remember the famous scene where Nicolas Gage searching for a hidden treasure in the desk!) 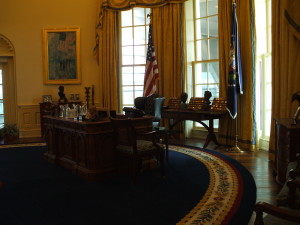 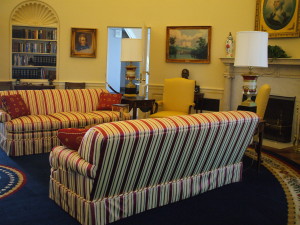 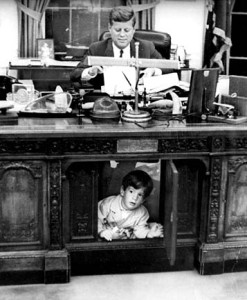 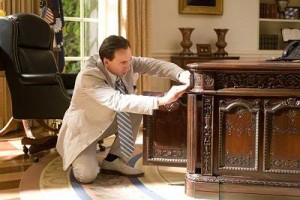 When plans where first being discussed for the Clinton Presidential Library the first choice was to build it in Little Rock, Arkansas.  The building’s architects took inspiration from the six bridges over the Arkansas River; expanded on the Clinton administration “a bridge to the future” theme used in the 2000 millennium celebration and built the bridge-like building concept that fits in beautifully with the scenic river view at the site.  Clinton also wanted the building to be an example of the green building design concept of sustainable construction and operation. The Clinton Presidential Center has received the Platinum LEED (Leadership in Energy and Environmental Design) Certification and presently is the only federally maintained facility to receive this prestigious recognition. 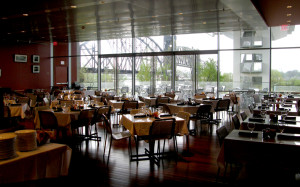 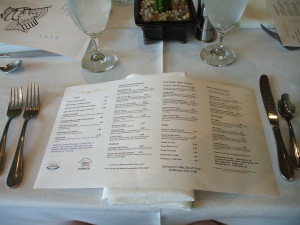