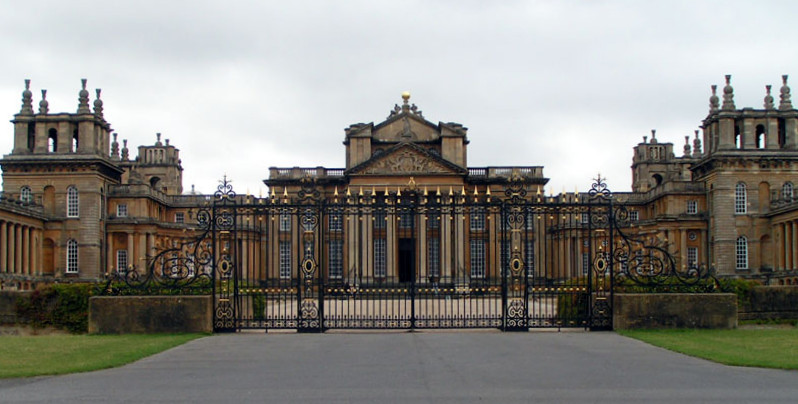 Since today is Winston Churchill’s birthday, I would like to share a travel report on Blenheim Palace where he was born and the ancestral home of the Churchill family.  My son and I visited this grand country house located in the beautiful English countryside near the village of Woodstock in 1998 while we were visiting relatives in nearby Oxford. Blenheim Palace has the distinction of being the only non-royal house in England to hold the title of palace and it has been designated a UNESCO World Heritage Site.

A Brief History of Blenheim Palace

Blenheim Palace was originally a gift from Queen Anne to the 1st Duke of Marlborough, John Churchill, for his military victory in 1704 against the French at the Battle of Blenheim. When the Duke returned to England after the battle he had become a national hero.  The Duke was given a site to build his new palace near the village of Woodstock and Parliament voted to a substantial amount of money from its construction.  Previously the site was had a house called the Manor of Woodstock and the estate was owned by the British Crown.  King Henry I used it as a deer park and King Henry II had kept his mistress there.  Before her succession, Queen Elizabeth I was imprisoned there by her half-sister Queen Mary I.  Later, Cromwell’s troop bombarded the estate and the ruins remained until 1705 when the land was cleared in preparation for the building of Blenheim Palace.

During the construction of Blenheim Palace (1705-1722) the process was delayed several times due to personal and political problems between the Crown and the Marlboroughs.  One of the problems was the Duchess, the former Sarah Jennings.  Years before, she had become a friend to the young Princess Anne who later became the Queen.  Upon becoming Queen, the Duchess was made the Mistress of the Robes, one of the highest honors for a lady.  Later the relationship between the Queen and the Duchess became very strained with constant disagreements and finally by 1711 the Queen cut off all funding for the construction of Blenheim.  By this time, the Duke had also fallen out of favor with the Queen over political issues.  The Marlboroughs were banished from the Queen’s Court and forced into exile, they did not return to England until after Queen Anne died in 1714.

The Duchess had wanted the famed architect Sir Christopher Wren to design and build Blenheim Palace but the Duke choose to commission Sir John Vanbrugh.  There were constant arguments between the Queen, Parliament and the Duke over the funding for the construction.  When the contract was drawn, despite the wish of the Queen to honor the Duke for his service to the Crown, there was no mention as to who was responsible for payment to the architect and building costs.  Delays over conflicts in style and design persisted between the Duchess and Vanbrugh.  Then, accusations of extravagance made by Parliament caused budget restrictions and later when the Duke and Duchess fell out of favor with the Queen construction stopped during the time the Marlboroughs were living out of the country.  Upon their return, construction resumed at the expense of the Duke but further disagreements caused the replacement of Vanbrugh with his partner, Nicholas Hawksmoor.  In the end it had taken almost seventeen years to complete the construction of Blenheim Palace.

During almost 300 years of history, Blenheim Palace has been an ancestral home, mausoleum and monument to the Churchill family. Over the years, various members have made minor changes to the interior of the house as well as the gardens and parklands surrounding the estate.  At the end of the 19th century when the wealth of the family had been depleted due to social and economic changes in England, the estate was saved from ruin when the 9th Earl of Marlborough married the wealthy American railroad heiress Consuelo Vanderbilt.  Blenheim Palace is most notably the birthplace of Sir Winston Churchill, the former Prime Minister of England. 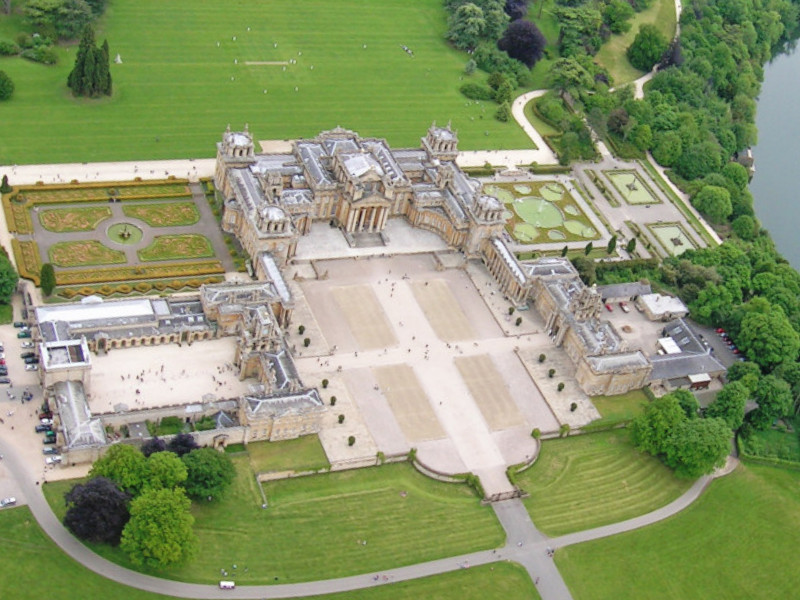 A Tour of Blenheim Palace

When visiting Blenheim Palace, guests enter through the East Gate with an inscription plaque that was added at the end of the 19th century by the 9th Duke stating the generous gift of Queen Anne to the 1st Duke of Marlborough.  After passing through the entrance, visitors enter the Kitchen Court area of the Palace.  To the right is the Palace gift store and to the left is the Orangery, or the greenhouse area, where currently most of the special events at the Palace are held.  Located in the Kitchen Court area are the Palace’s kitchen, bakehouse, laundry and storage areas.

Guests will continue on through this area and pass under a grand archway with the Townsend’s Clock Tower overhead and emerge into the Great Court area of the Palace.  Be sure to look back and above either side of the archway for a view of the two stone “English” lions which are savagely devouring the “French” cocks, these statues symbolically reference the 1st Duke of Marlborough’s military victory in 1704 against the French at the Battle of Blenheim. If guests were to proceed directly straight across the Great Court there is another service area, the Stable Court, which was never fully completed and this area is where the several stables and storage areas.  To the right of the Clock Tower is the main gate of the Palace, known as the Ditchley Gate, and to the left is the entrance into the main building of the Palace.  In the original plans, Vanburgh had designed an impressive stone entrance in the center with colonnades on either side to completely enclose the Great Court but unfortunately these were never built.  The wrought iron gate was added later by the 9th Duke during extensive renovation and repairs of the Palace in the late 19th century.

From the Great Court, guests enter the main building of the Blenheim Palace passing through massive doors which features a complicated lock system fashioned in brass and copied from the gates of Warsaw, the door is opened with a huge coronet key.  The first room in the Palace is the Great Hall which has a 67 feet high ceiling painted in 1716 by Sir James Thornbill; the scene depicts Marlborough presenting to the Sovereign the plan for the Battle of Blenheim.  Standing just inside the front door, seen directly ahead is the Saloon, the original plan of the Palace’s first floor had two suites of state apartment rooms located to the left and right of the Saloon which were initially intended for visiting important guests and dignitaries such as the Queen or King.  The interconnected rooms of each suite were designed as follows: an audience room, then a private “withdrawing” room and lastly the bedroom of the suite with a small dressing room off to the side.  As you will see later in the tour, the rooms now serve different purposes.

The Saloon is entered into directly from the Great Hall; guest will pass under a large stone archway with the coat of arms of Queen Anne carved in stone by Grinling Gibbons to honor the sovereign who made Blenheim Palace possible.  The Saloon is the state dining room and now only used once a year by the current Marlborough family on Christmas Day.  The table is set with a Minton service and silver gilt with a silver centerpiece located on a side table depicting Marlborough on his horse after the Battle of Blenheim writing the famous dispatch to the Duchess of his victory over the French.  The other feature of note in the Saloon is the beautiful dome ceiling painted by Louis Laguerre representing Peace.  Laguerre also painted the murals on the walls around the perimeter of the room showing people (including his self-portrait) from all the nations of the world coming together in Peace, interestingly he included French spies.

To the left of the Saloon is the Green Writing Room with the most famous tapestry of Blenheim Palace depicting Marlborough in triumph accepting the French Marshall Tallard’s surrender at the Battle of Blenheim.  The next state room is the Red Drawing with two large painting of note, one by Sir Joshua Reynolds showing the 4th Duke and his family and facing it on the opposite wall is the John Singer Sargent portrait of the 9th Duke and his family.  Beyond this room is the Green Drawing Room.

To the right of the Great Hall, entered down a corridor, is the Long Library.  This room is 180 feet long with very high ceilings that feature a series of domes and has several additional distinct features to note.  One is the large full length statue of Queen Anne by John Michael Rysbrack with an inscription noting the close ties between her and the 1st Duke and Duchess of Marlborough, the statue stands in the bow window area of the library.  The other is located at the north end of the room and it is a large organ that was commissioned by Henry Willis& Sons.  Later installed by the 9th Duke in 1891, it is the largest pipe organ in a private home in Europe.  The organ is still currently in use and played at the Palace on Friday and Sunday afternoons.

From the Long Library, there is access down a colonnade to the Palace Chapel.  The Chapel was completed in 1732 and contains the tomb of the 1st Duke of Marlborough, the Duchess and their two sons; sadly their four daughters are not mentioned on the memorial and were buried elsewhere.  When the Duke died in 1722 he was buried in Westminster Abbey and when the Duchess died in 1744 his remains were re-interred at Blenheim Palace.  Successive Dukes and their wives are also interred in the vault beneath the chapel.  Most other members of Churchill family are interred in St. Martin’s parish churchyard at Bladon, a short distance from the palace.

Finally, located in a small room to the right of the Great Hall is the famous room that Winston Churchill was born in 1874 while his parents were visiting their relatives at Blenheim Palace.  Churchill’s mother, Lady Randolph, was taken by surprise when she gave birth to her son prematurely several weeks before he was expected.  It is fitting that Churchill was born at the Palace, since later in life he had a strong sense of family and came to greatly admire the 1st Duke of Marlborough.  Many years later, he proposed to his future wife, Clementine Ogilvy, at the Temple to Diana located beside the lake on the estate.  Churchill is also buried nearby Bladon; there is a direct line of axis from Blenheim Palace past the Column of Victory located on the estate to the cemetery in Bladon thereby symbolically linking both his birth and his death.