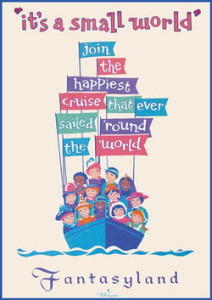 This post is in honor of the 50th anniversary of the world famous “It’s a Small World” attraction which opened in Disneyland on May 28, 1966.  It’s a Small World is considered a classic Disney dark ride which means that it is an amusement park ride contained inside a building.  The whimsical attraction features hundreds of animatronic children dressed in their national costumes and singing a memorable song in their native languages.  So, in this post I will discuss the history of the “It’s a Small World” attraction including the construction of the ride and the many refurbishments throughout the years and finally I will end with some fun and interesting trivia about the ride.

The history of the “It’s a Small World” attraction

The It’s A Small World attraction was originally created for the UNICEF pavilion sponsored by Pepsi at the 1964 New York World’s Fair.  The basic concept of the ride was intended to promote peace and unity as interpreted by the children of the world.  The basic design was created by WED, a division of the Walt Disney Studios in Burbank.  The attraction was actually one of five created WED for the Fair; the other four attractions were the Skyway ride sponsored for the Ford Motor Company, Great Moments with Mr. Lincoln built for the Illinois pavilion, the Carousel of Progress sponsored by General Electric, and CircleVision sponsored by Kodak. 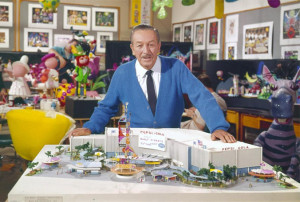 Disneyland had opened in 1955 and Walt Disney was always looking for ways to improve his amusement park and he is famously quoted as saying, “Disneyland will never be completed and it will continue to grow as long as there is imagination left in the world”.  So, by working on these various sponsored attractions for the World’s Fair, Disney was able to develop new ride systems which would eventually be used in Disneyland.  The boats for the It’s A Small World ride were built at the Disney Studios and the vehicle propulsion and guidance systems were designed by the Arrow Development Company.  The ride system developed for It’s a Small World would also solve the problem of moving the large crowds anticipated for the World Fair through the ride in a timely manner.  (Special Note: This same ride system was used again for the Pirates of the Caribbean attraction in the New Orleans Square area of Disneyland) 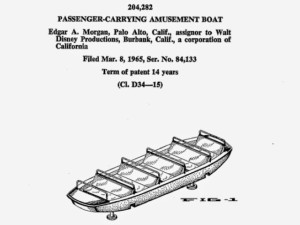 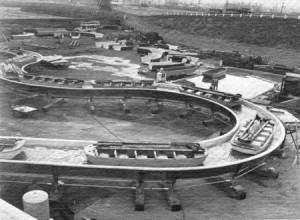 Prior to the New York’s World Fair, Disney had developed the technology of audio- animatronics which was first used for the Enchanted Tiki Room attraction that opened at Disneyland in 1963.  (Audio-animatronics is the term used for robots that move in sync to pre-recorded soundtracks, thus giving the illusion that the figures are brought to life)  Several of the attractions that the Disney Imagineers were creating for the World Fair would also use audio-animatronic figures; such as the Great Moments with Mr. Lincoln and the Carousel of Progress attractions and of course the It’s a Small World ride.  After the conclusion of the New York World’s Fair in 1965, all the attractions were disassembled and moved to Disneyland in Anaheim, California.  (Special Note:  Walt Disney died in 1966 and the four attractions created for the World Fair were some of the last projects that Disney was directly involved in from concept to ride completion.  However, the Pirates of the Caribbean attraction was officially the last one that Disney was involved in and the attraction opened in 1967 three months after his death) 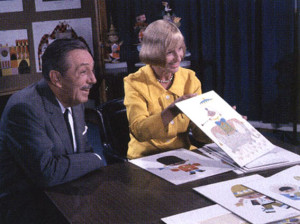 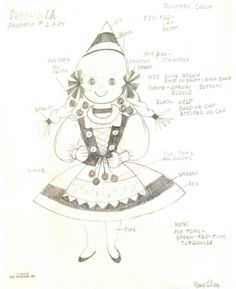 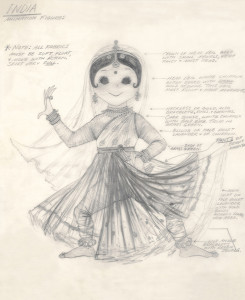 The original It’s a Small World ride for the World Fair featured several hundred audio-animatronic children designed by Mary Blair (the Disney art director for animated classics films including Cinderella, Alice in Wonderland and Peter Pan) and sculpted by Blaine Gibson (per the request of Disney, each of the children’s facial features were identical) with the colorful sets designed by Rolly Crump and the children’s costumes designed by Alice Davis (featuring the native dress of each country).  Initially Disney wanted have the children depicted in the various scenes of the ride to sing the national anthems of each country but ultimately he requested one song be used that could easily be translated into many languages. Robert and Richard Sherman, Disney staff songwriters, came up with the iconic “It’s a Small World” song.  (Shown in the first photo is the It’s a Small World ride under construction in Disneyland, the second photo shows Walt Disney with Marc Davis and Mary Blair with her doll) 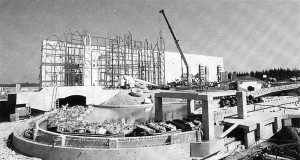 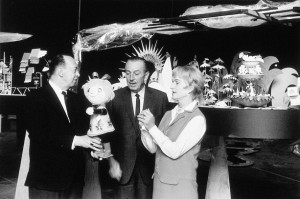 After the It’s a Small World attraction moved to Disneyland and the newly refurbished ride re-opened on May 28, 1966 in the Fantasyland section of the park.  The opening ceremony featured a gathering of children representing countries from around the globe.  In preparations for the grand opening ceremony, Disney representatives gathered the waters from the oceans and seas around the world.  Then, during the ceremony the waters were symbolically poured into the ride’s canal creating a grand version of the “waters of the world” flowing through the attraction.  It was a great public relations idea orchestrated by Jack Lindquist who at the time was the advertising manager of Disneyland. 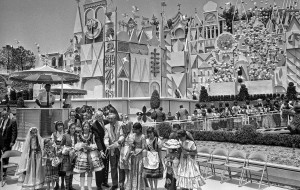 The Disneyland version of the It’s a Small World attraction featured an exterior façade which was inspired by an original drawing of Mary Blair, shown in the photo below.  The large flat façade was painted white with gold and silver trim and depicts the stylized versions of the landmarks of world, such as Paris’ Eifel Tower and Italy’s Leaning Tower of Pisa.  The area in front of the façade features several fanciful topiary animals that are meticulously maintained by the Disneyland horticultural department.  (Special Note: The exterior of the It’s a Small World attraction has undergone several different color schemes from the original white to one with various shades of blue to another version painted white and pink with pastel colored trim.  In preparations for Disneyland’s 50th anniversary in 2005, the façade returned to the original color scheme) 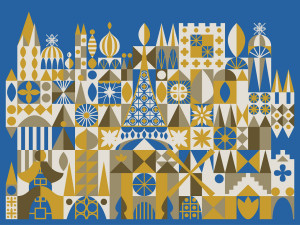 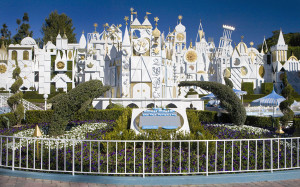 In the center of the It’s a Small World attraction façade, Disney had requested a special 30 foot high timepiece which would work like a giant cuckoo clock.  To mark each quarter hour, the side doors would swing open and a parade of wooden dolls dressed in their national costumes would move past the base of the clock.  Then, as the last doll proceeded back into the door on the other side, the large central doors below the swinging face would open to display the time and bells would ring to count the hours and quarter hours. 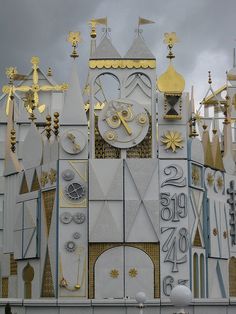 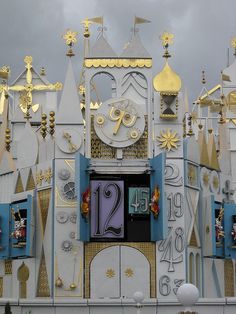 After boarding the It’s a Small World boats, guests will slowly travel through the main show building and into several room.  About 400 specially dressed children are wearing their native costumes and singing the ride’s theme song in their native languages.(Shown below are examples of Mary Blair artwork and designs used on the ride)

The various countries depicted on the ride currently include:

Throughout the years, numerous minor adjustments and a few major changes have been made to the It’s a Small world ride.  In 1997, Disneyland decided for the Christmas season to create the It’s a Small World Holiday version of the ride with an elaborate overlay and the iconic theme song was replaced with holiday songs.  It proved to be so popular with the park guests that every year since then the attraction is closed in late October to assemble the temporary holiday overlay and it reopens in early November just before the start of one of the busiest times in the park, which is the weeks between Thanksgiving and New Year’s Day.  The attraction is closed again in January for a few weeks to remove the holiday overlay. 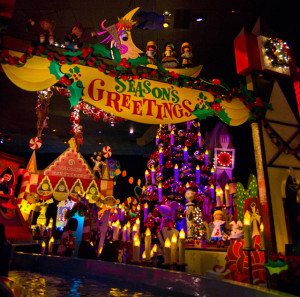 In 2008, the It’s a Small World attraction was closed for a 10 month period for major refurbishment.  This was a long time for a popular Disneyland attraction to be closed but the ride was in desperate need over some major changes.  The original ride system from the 1964 World Fair was now over 40 years old and despite occasional repairs it was time to upgrade the water canal and boats. The outdated fiberglass boats were replaced with redesigned boats made of durable plastic which was lighter and more buoyant.  The water propulsion system that guided the boats through the ride was replaced by a more modern electric water jet turbines developed for a more efficient and smoother ride.  Prior to the refurbishment the boats would often “bottom out” in the water canal causing the boat to stop.  This happened because at the time the ride was originally built the estimated combined weight of the guests was calculated lower than the current weight of a heavier generation of guests!  So, during the refurbishment the water canal was built deeper to accommodate the increasing weight of the guests! 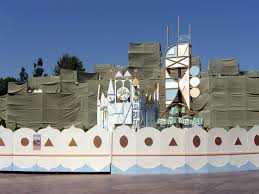 The exterior façade was repaired and repainted, a new entrance sign was created and the topiary garden was replanted.  The interior ride sets, the majority of them were from the original World Fair attraction were dismantled, repaired or replaced and then repainted.  (Special Note: During the 2008 refurbishment, the rainforest area previously located in a separate room was incorporated into the South Seas Islands room.  The section of the ride formerly occupied by the rainforest was then used to create the North American room.  Prior to the renovations, the Cowboy and Indian children representing North America appeared near the end of the Finale Room)

As part of the major refurbishment, all the dolls were removed from the ride to be repaired and repainted, the dolls costumes were cleaned, damages were repaired or new copies of the costumes were made.  Also at this time a very controversial decision was made to incorporate additional doll characters into the attraction.  In the past, Disneyland had successfully added Disney movie characters into other attractions without too much public outcry.  In 2006 the Captain Jack Sparrow, Barbossa and Davy Jones characters from the popular Disney “Pirates of the Caribbean” movie series were added to the Pirates of the Caribbean ride in Disneyland.  Then, in 2007 the classic Submarine Voyage ride in Tomorrowland which had been closed for almost ten years re-opened as the Finding Nemo Submarine Voyage featuring characters from the popular Disney-Pixar film, “Finding Nemo”.  But for some reason the public were having a hard time adjusting to the fact that It’s a Small World, one of the most beloved attractions in Disneyland, would be changed.

Undeterred, Disney went ahead with their plans to incorporated the 37 new characters into the It’s a Small World attraction.  The additional characters came from several of the Disney movies, some were from the older classic Disney fairytale movies and others were from more recent Disney films, were added into the appropriate sections of the ride corresponding to the settings of their original stories.  Some of these additional characters are listed below: 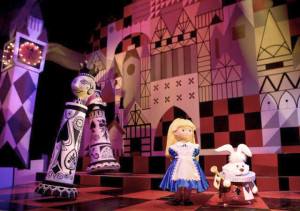 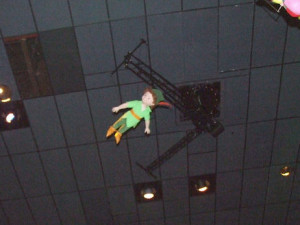 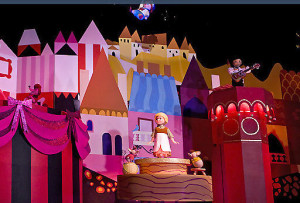 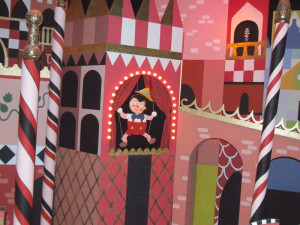 In the China section of the ride guests will see Mulan and Mushu form the Disney animated film “Mulan”, shown below in the photo on the left.  In the section of the ride depicting the Middle East, the characters of Aladdin, Jasmine and Abu from the animated film “Aladdin” can be seen overhead flying on a magic carpet, shown in the photo on the right. 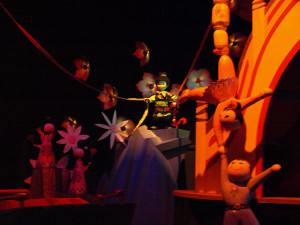 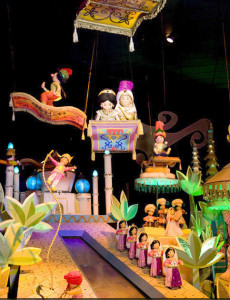 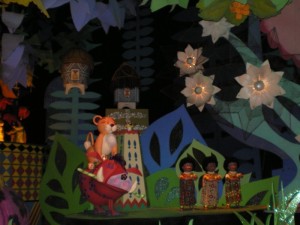 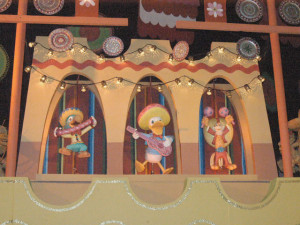 In the South Seas section of the ride guests will see the character Ariel and Flounder from the “Little Mermaid”, the characters of Lilo with Stitch from Disney animated film “Lilo and Stich” riding on a surfboard and also added are the characters of Nemo and Dory from the very popular “Finding Nemo” movie.  Finally, some of the last characters to be added to the It’s a Small World ride are in the North America section and they are Woody, Jessie and Bullseye from the “Toy Story 1 & 2” movies. 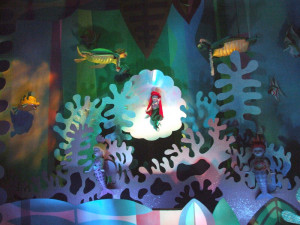 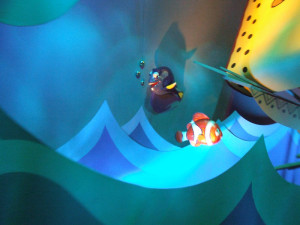 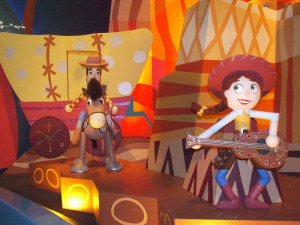 The It’s a Small World attraction at Disneyland proved to be so popular with the park guests that as the other Disney Parks were opened around the world other versions based on the original ride were built with slight variations: the Magic Kingdom at Walt Disney World in Florida in 1971, Tokyo Disneyland in 1983, Disneyland Paris in 1992 and Hong Kong Disneyland in 2008. 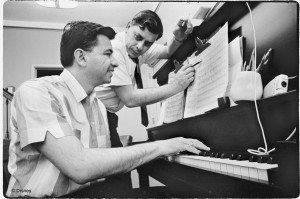 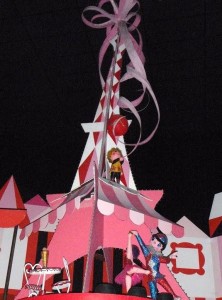 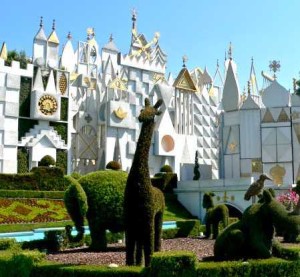