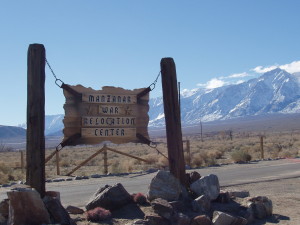 We have driven California Highway 395 for years heading to and from Mammoth Lakes, CA.  Every time we pass the Manzanar National Historic Site we always want to stop but we never have the time.  Finally in 2005, we made special plans to finally stop there.

Manzanar is a difficult part of the history of the United States and California.  After the Japanese attack on Pearl Harbor, on December 7, 1941, the United States officially entered into World War II.  Citizens became concerned over the threat of another direct attack on the West Coast and California.  The United States Government and the Federal Bureau of Investigation took swift action and arrested 2,192 people of Japanese descent.  This action was meant to monitor and control the activities of these potential hostile “enemy aliens.

On February 19, 1942, President Roosevelt signed an Executive Order authorizing the construction of “relocation centers”. This resulted in the forced relocation of over 120,000 Japanese Americans, two-thirds were actually native-born American, into ten “relocation centers” located in several states, one of those was Manzanar.

NOTE:  Since the end of World War II, there has been debate over the terminology used to refer to Manzanar, and the other camps in which Americans of Japanese ancestry, were incarcerated by the United States Government during the war. Several different terms have been used to describe these camps; “War Relocation Center,” “relocation camp,” “relocation center,” “internment camp”, and even “concentration camp”.  The controversy over which term is the most appropriate is still being currently debated. 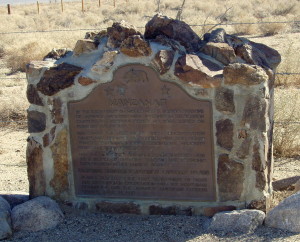 Manzanar was the first of the relocation centers to be established in March 1942.  Originally it was supposed to be a temporary “reception center”, known as the Owens Valley Reception Center, run by the US Army’s Wartime Civilian Control Administration.  In June 1942 it became a permanent facility and was renamed the Manzanar War Relocation Center. The first Japanese Americans, “incarcerees”, to arrive at Manzanar helped to build the administration offices, barracks, recreational hall and the additional buildings needed.  The number of incarcerees increased steadily until July 1942 when there were 10,000. 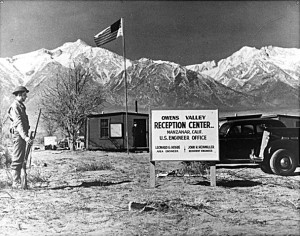 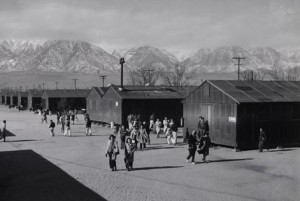 Manzanar is located in California’s Owens Valley between the towns of Lone Pine and Independence, about 230 miles northeast of Los Angeles.  Situated at the foot of the Sierra Nevada mountain range, this area had long been the home of the Paiute Native Americans, who had several villages throughout the valley.  Ranchers and miners established the town of Manzanar, a Spanish word that means apple orchard, in 1910 but the town was abandoned when the City of Los Angeles purchased the water rights of the Owens Valley in 1929.

The Manzanar Relocation Center leased 6,200 acres from the City of Los Angeles.  The residential area where the incarcerees lived covered about one square mile and had 36 blocks of 20 ft. by 100 ft. barracks.  Each barrack was divided into 20 ft. by 20 ft. separate living areas for each incarceree family, the partitions did not reach the ceilings and offered very little privacy.  In addition, each residential block had a communal mess hall, laundry room, recreation hall and a communal latrine used by both the women and the men.

Manzanar also had 34 additional blocks that provided staff housing, administration office, two warehouses and a garage.  The facility also had a school and auditorium, a post office and store, and even a newspaper office.  Each relocation center was intended to be self-sufficient and Manzanar provided various services, such as: beauty and barber shops, shoe repairs.  In addition, the incarcerees raised chicken and hogs, and they also grew vegetable gardens and cultivated the existing apple orchards.  The incarcerees even made their own soy sauce and tofu.  The facility offered almost every convenience found in most American cities.  The visual exception was the sentry posts at the main entrance, eight watchtowers manned by armed Military Police located around the perimeter and the entire facility was enclosed by barbed wire.

For the Japanese American incarcerees, life in Manzanar became their new normal.  Meals were based on the military daily requirements.  Since wartime rationing made meat scare, the chicken and hog farms helped to supplement their meals of rice and vegetables.  The incarcerees did earn some money and were employed in various jobs at Manzanar, with workers earning $8 to $19 per month depending on their skill level and in addition each incarceree received $3.60 per month as a clothing allowance.  Even given the Owens Valley extreme weather conditions, summer temperatures exceeding 100 degrees and winter temperatures of 40 degrees with occasional snowfalls, the incacerees became accustomed to the conditions.  Some were able to build elaborate gardens with bridges over water with waterfalls and rock ornaments found in a typical Japanese garden, some of these garden ruins can still be found at Manzanar.  Incacerees were also able to participate in a variety of sports including baseball, football, martial arts and even golf on a nine-hole golf course. 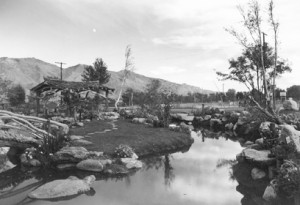 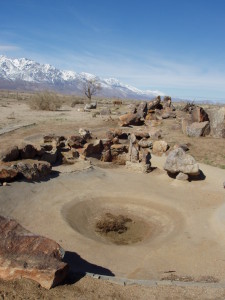 Although the majority of the incarcerees accepted their fate during World War II, there was some resistance with problems concerning unfair wages, black marketing of sugar, shortage of meat and rumors of camp informers that reported any suspicious behavior to the camp administrations and even the FBI.  One serious incident occurred in December 1942 and became known as the Manzanar Riot.  When the Japanese American Citizens League leader, Fred Tayama, was beaten by six masked men after months of tension in the camp, a man named Harry Ueno was suspected of involvement in the planned attack and was arrested.  A few days later a crowd of several hundred incarcerees gathered in protest and the military police threw tear gas to disperse them.  Suddenly, the military police fired into the crowd, one man died and nine others were wounded before the situation ended.

Manzanar was closed permanently in November 1945.  The incarcerees were officially released and each person was given $25 and a one-way train or bus fare.  Many left the camp voluntarily but some refused to leave because they had no place to go after losing everything at the time of their forced incarceration.  During the time Manzanar was open, 146 people died.  The cemetery site at Manzanar is marked by a monument built by an incarceree stonemason in 1943, the inscription written in Japanese 慰靈塔 reads, “Soul Consoling Tower”.  When we visited, there were strings of origami and often Manzanar survivors or visitors leave other items or offerings. 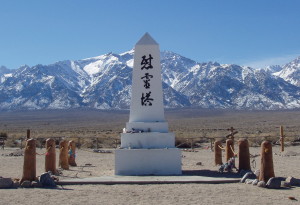 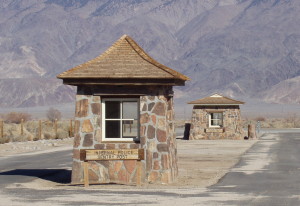 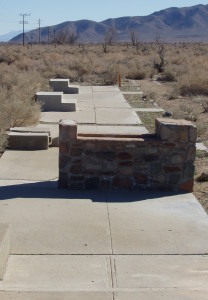 After the camp closed, the barracks and other structures were removed with the exception of the two sentry posts.  Over the years since closing, former incarcerees formed the Manzanar Committee which worked to establish Manzanar as a National Historic Site to provide historical and cultural interpretation of the relocation of Japanese Americans during World War II.  Finally in 1992, Manzanar was designated a National Historical Site  and five years later the National Park Service acquired 814 acres of land from the City of Los Angeles. 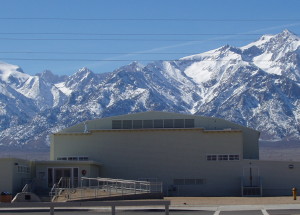 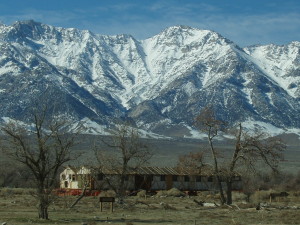 In 2004, an Interpretative Center was created inside the restored Manzanar High School which has exhibits that tell the story of the Manzanar Relocation Center.  At the site, all that remained where several building foundations, the cemetery monument and the garden ruins.  The National Park Service has restored the sentry posts at the camp entrance and built a replica of a guard tower and provided a self-guided road tour and informational markers.  At the time that we visited in 2005, there were plans to reconstruct on of the residential blocks.

TRAVEL NOTE: Since the subject of Manzanar and the War Relocation Center for Japanese Americans during World War II is such a serious one, we would advise visiting with older children.

RECOMMENDED READING:  “Farewell to Manzanar”, is a book first published in 1973 and written by Jeanne Watatsuki Houston, who was incarcerated there as a child.  The book tells the story of the Watatsuki family and their experiences at Manzanar.