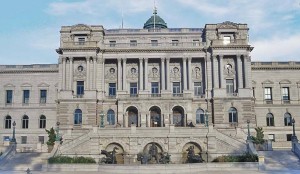 If you are planning a visit to Washington, D.C. we highly recommend the Library of Congress free one-hour guided tours of the historic Jefferson Building.  During the tour visitors will learn about the history and collections of the Library as well as the architecture and the meanings of the symbolic art displayed within the interior of the Jefferson Building.  The guided tours are available Monday through Saturday during the year and no prior reservations are required but visitors are advised to check in at the Ground Floor Information Deck.  Self-guides tours of the Jefferson Building and current exhibitions are also available during days that the building is open to the public. For more information, please check the Library of Congress website at www.loc.gov/visit/tours

TRAVEL NOTE: At the time that we visited Washington and the Library of Congress Jefferson Building I had never seen a building with so many lovely architectural details and beautiful artwork, it was a truly a wonderful experience!  I could have stayed longer than the one hour guided tour because there were so many interesting details throughout the Jefferson Building.

The main building of the Library of Congress is the Jefferson Building, which is located near the United States Capitol Building.  The building is approximately 470 feet in length and 340 feet in depth and it is three stories in height and the facade is constructed of granite.  The floor plan is basically divided into four sections with an octagon shaped area, known as the Reading Room, at the intersection of the different sections known as pavilions.  Overhead in the Reading Room there is a large dome and on the exterior of the building the dome is topped with a symbolic gilded torch which is known as the “Torch of Learning”. 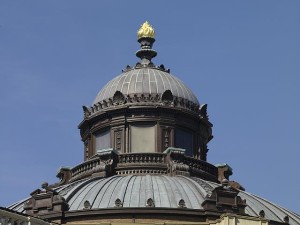 Outside on the west side of the Jefferson building is “The Court of Neptune” fountain created by sculptor Roland Hinton Perry.  The semicircular fountain extends to 50 feet wide with three niches that suggest sea grottos and in the center is the 12 foot tall bronze sculpture of the sea god Neptune and on either side are sea nymphs which appear to being riding sea-horses.  Additional sea creatures such as dolphins, frogs and turtles also appear in the fountain or behind on the granite walls and there are a series of water jets with more water flowing from the mouths of monstrous sea serpents.  At night the fountain is beautifully lighted. 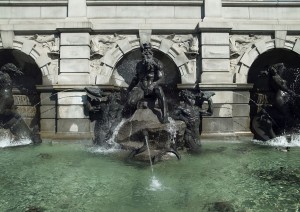 At the west side of the Jefferson Building, which is considered the main entrance, are three arched doorways with a set of impressive bronze doors created by Frederick MacMonnies.  The center door features two bas reliefs of women that represent the humanities and intellect.  The semi-circular bronze piece or lunette above the door shows the seated goddess Minerva and on either side of her are two winged cherubs set to carry out the printed word as her gift to mankind.  The west facade of the building rises to showcase a second story balcony with a series of windows which are marked above by the busts of nine of the world’s great writers. 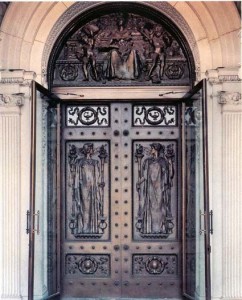 As visitors proceed into the Jefferson Building, they will pass through an elaborate entrance area or vestibule and then proceed into the Great Hall.  The grand Great Hall is a visual delight and there are a number of pieces of art and architecture with special meanings and symbolism designed to show America’s love of learning, science and culture.  First, take a look at the intricate marble flooring which contains several brass inlays in the elegant patterned design of red and yellow Italian marble.  In the center is a large sun marked with the four compass points that coincide with alignment of the building.  At the outer edges of the floor are twelve brass inlays representing the signs of the Zodiac and alternating brass inlays of floral rosettes which are all set in red French marble surrounded by a border of white Italian marble. 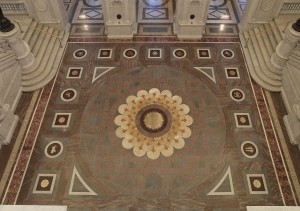 Standing at the entrance to the Great Hall and looking directing across the room is the Library’s Commemorative Arch which leads to the entrance of the Reading Room.  Large double marble columns flank both sides and above the arch are the words “Library of Congress” inscribed in large gilded letters.  Then, above that is another inscription cut into the marble which gives the information pertaining to the Thomas Jefferson Building with a list of the pertinent dates and architects involved in the construction.  While standing in the Great Hall, look up to see the beautiful cove ceiling which is highlighted by six stained-glass panels.  In addition, the ceiling is decorated with aluminum leaf, Italian-style paintings, paneled carvings and wonderful winged figures carved in plaster by Philip Martiny are also featured in the corners of the ceiling. 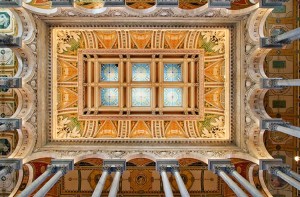 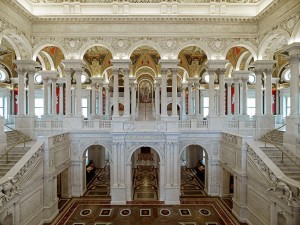 Now, before ascending to the second floor, take a look at the intricate figurines also by Philip Martiny that decorate the staircases found on either side of the Great Hall.  Two sets of figurines decorate the staircase buttresses; the south staircase features two cherubs representing America and Africa with a globe in between them showing the two continents and the north staircase features two cherubs representing Asia and Europe with the globe between them showing those two continents.  As the stairs ascend to the second floor take a look at a series of eight figurines on each of the staircase bannisters, the cherubs represent the various occupations and pursuits of life.  The south staircase features a mechanic signifying inventions, a hunter, a child holding a glass of wine, a farmer and a fisherman, a soldier represented by a child holding a gun, a chemist and a cook.  The north staircase features a gardener, an entomologist holding a specimen box, a student, a printer, a musician, a physician, an electrician and an astronomer.  At the top of the each staircase, the two balustrades feature a trio of cherubs, one set represents the arts of painting, architecture and sculpture and the other set represents literary topics of comedy, poetry and tragedy.  At the bottom of each staircase, standing on the newel posts are bronze female figurines holding an electrified torch light.  The figures are decorated in a classical style with laurel wreaths and draped clothing. 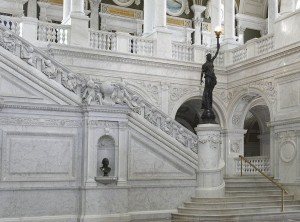 One final area adjacent to the Great Hall and located on the second floor is the entrance to the Visitor’s Gallery of the Main Reading Room.  After ascending another staircase and before entering the Visitor’s Gallery, is a magnificent marble mosaic by Elihu Vedder.  Located at top of the staircase landing is a 15 feet high and 9 feet wide arched panel which features Minerva, the goddess of peace and the guardian of civilization.  In the mosaic she is depicted as former warrior who has set aside her armor after a victorious battle and she is now looking towards prosperity but is still prepared to protect her country and holds a staff in one hand as she stands vigil against any future enemies.  In the right lower portion is a small statue of Victory which is shown as a winged woman standing on a small globe.  In Minerva’s other hand she hold a scroll with the long list of subjects that are needed for a society to flourish, such as Law, Statistics, Sociology, Philosophy, etc. 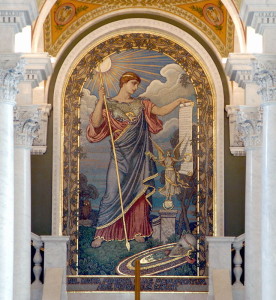 After viewing the Reading Room, I encourage visitors to explore the second floor where there are even more beautiful decorations along the corridors and in the various rooms.  Unfortunately, the art and architecture on this floor are too numerous to mention but if you are interested in further details of these areas of the Thomas Jefferson Building, I would highly recommend a visit to the Library of Congress website, www.loc.gov/visit/tours for additional information and photos.  Another source of information about the history, art and architecture of the Library of Congress is a wonderful book, “The Library of Congress – the Art and Architecture of the Thomas Jefferson Building”, published by W.W. Norton and Company.