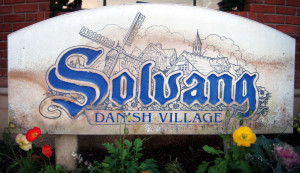 Solvang is located about 50 miles from Santa Barbara, which is about a one hour drive through the beautiful scenery of the golden rolling hills of Central California.   Our family has been visiting this delightful Danish town since the 1960s.  It is a great day trip and the town is known for their shops, bakeries and restaurants.  The architecture of the buildings are a traditional Danish style, be sure to look for stork figurines on the rooftops, and there are several windmills scattered throughout the town.  There is even a copy of the famous Little Mermaid statue of Copenhagen and the bust of the famous Danish writer Hans Christian Andersen.

A Brief History of Solvang and the Santa Ynez Valley 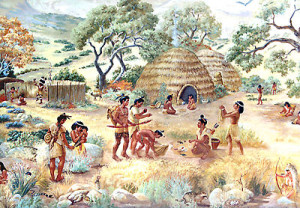 Then in the early 19th century the Spanish missionaries were establishing missions along the coast of California.  In 1804 the Mission San Ines was created to serve as a midway point from the Santa Barbara Mission and La Purisima Concepcion in Lompoc.  The land where they built the mission was originally a 9,000 acre Mexican land grant known as Rancho San Carlos de Jonata.  The missionaries converted the Chumash Indians to Christianity and life in the valley centered on the Mission San Ines.  Today, the mission still stands near the town of Solvang.  (Travel Note:  Take the time during a visit to the area for a quick trip to the Mission San Ines to learn about the interesting history of the California Missions)

During a period of time between 1850 and 1930 a large number of Danes left Denmark due to the country’s poor economic conditions.  The destination of a majority of the Danes was the United States, they settled mainly in the Midwest in the states of Illinois, Iowa, Nebraska and Minnesota.

By 1906, the Danes that had immigrated to the Midwest were looking to escape the cold winters and the church leaders were exploring the possibility of moving west to create a new Danish colony in California.  In 1910, several Lutheran pastors along with other Danish immigrants formed the Danish-American Colony Company and started looking for land along the coast of California.  In 1911, they had found and purchased 9,000 acres of the former Rancho San Carlos de Jonata Mexician land grant in the Santa Ynez Valley.

The pastor’s returned to the Midwest to encourage the other Danish immigrants to buy land in the new colony, this proved very successful.  One of the first building to be constructed in the new town was a hotel where new arrivals could be housed and it was located not far from the old mission.  Later a school was built at the end of 1911 and opened with 21 students.  Soon, Solvang had a post office, a bank, several stores and a lumberyard.

Initially, for a number of years church services of the Bethania Evangelical Lutheran Church were held at the school.  In 1928, a new church was built based on the rural Danish Gothic-styled churches found in Denmark.  The exterior of the building is made of concrete with walls that are a foot thick and the interior features beautiful hand-carved woodwork on the altar, pulpit and altar rails.  Originally services were held mainly in Danish, but currently they are held in English with the exception of the Lillejuleaften celebrated on December 23 every Christmas season.

After the church was built, the architecture of the buildings in Solvang began to slowly change to a more traditional Danish style.  In the mid 1940s, the first of the town’s four windmills was built and the new buildings were built by a local architect in a new style called Danish Provincial and older buildings were redone to fit the half-timbered and artificial thatched roofs designs. 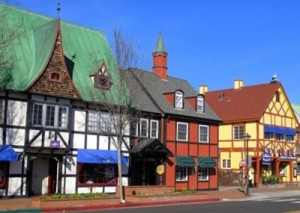 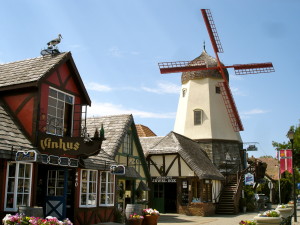 Visitation to the area increased steadily over the next decades.  In 1939, Denmark’s Crown Prince Frederik and his wife Princess Ingrid visited Solvang because there were about 400 Danish people living in the area at the time and this created publicity for the town.  Then in 1947, the Saturday Evening Post published a featured article on Solvang and even more tourists came.  In 1960, Denmark’s Princess Margrethe visited and then again in 1976 with her husband Prince Henrik after she became Queen of Denmark. Solvang was now becoming a California tourist attraction with over one million visitors per year.

Things to do and places to visit in Solvang

Today, visitors to Solvang love the little “Danish Capital of America”.  They enjoy the more than 150 specialty shops, restaurants and bakeries.  The weather has mild temperatures year-round and the charming village is located in just a few short blocks so walking around is very easy.  There is also a replica of a 19th century Danish horse-drawn streetcar known as the Honen (“the hen”) that take guests on sightseeing tours around downtown Solvang. Bicycling or a motorcycle ride through the beautiful rolling hills of Central California is also a favorite activity for visitors. 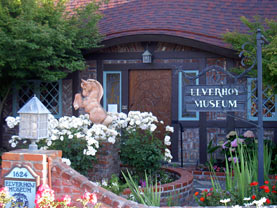 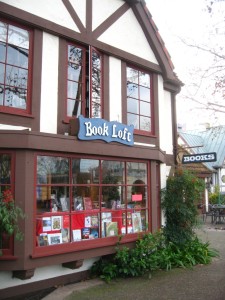 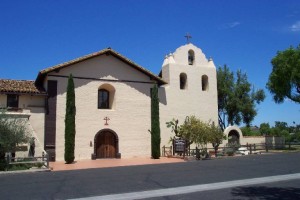 For more information about the town of Solvang, please see their website www.solvangusa.com

The Little Mermaid statue – Located near the center of Solvang, at the northwest corner of Mission Drive (Highway 246) and Alisal Road, is a bronze replica of the famous statue that sits in the Copenhagen, Denmark harbor.  The two foot tall statue has stood surrounded by a fountain in Solvang since in 1976 and commemorates one of Hans Christian Andersen’s stories about a mermaid who gave up everything for the love of a prince.  The original 50 inch tall bronze statue in Copenhagen was created by Edvard Eriksen in 1913 and was commissioned by Carl Jacobsen whose family founded Carlsberg Brewery. 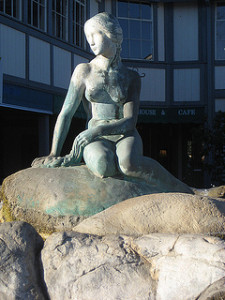 The Rooftop Storks – When you visit Solvang, look up at the rooftops of the buildings that line the main streets and you will see life-size wooden replicas of the European White Stork.  In Denmark it is said that if one of these birds land on your house it is believed to bring good luck and they would protect any home that they nest upon. 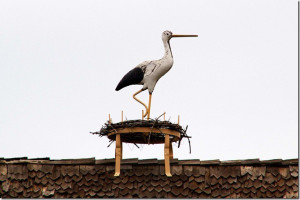 The European White Stork is a migratory bird that signals the arrival of summer in Denmark.  Sadly, the stork has dwindled in population from 4,000 pairs in 1890 to only 5 pairs of storks in 1995 according to the Danish Ornithologist Society.   The decrease in numbers has been linked to the drainage of their native wetlands, the use of pesticides, deaths due to collisions with overhead power lines and illegal hunting.  In 2008, the European White Stork was declared extinct in the wild of Denmark.