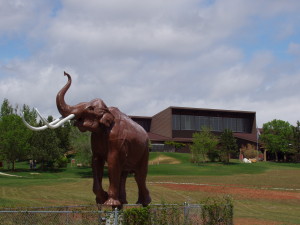 When we were planning a trip to South Dakota in 2004 and looking for things to do in the area, I found the Mammoth Site located in Hot Springs, SD.  I thought this would make a great place to visit and it was located near our hotel at the State Game Lodge in Custer State Park.  (Please check out last month’s Travel post, Custer State Park, for more information)

The Mammoth Site is located in Hot Springs, SD and it the world’s largest mammoth research facility.  A building and museum are built over the site of a massive sinkhole where a vast collection of preserved mammoth bones from the Pleistocene era were found in 1974.  The exciting part is that research and excavation at the site is still ongoing by a team of paleontologists and volunteers. 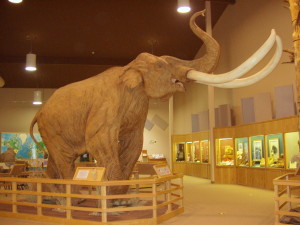 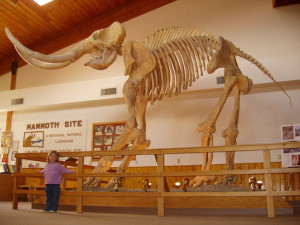 About 26,000 years ago there was a large cavern located in this area of South Dakota that collapsed.  The result was a deep-sided sinkhole which was about 65 feet deep and 120 by 150 feet wide.  A pond formed which attracted the wildlife in the area that came to feed on the plants and drink the water; among those animals were the Colombian Mammoths.  The animals that ventured too far into the deep pond where unable to escape the steep sides and died.  Then, over the next 350 to 700 years the pond filled with sediments.  The remains of these animals found at the site are technically not fossils since they were not mineralized but preserved by the clay and sand. 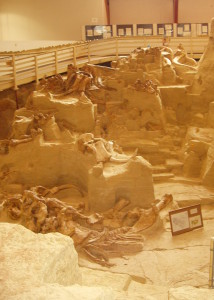 In 1974, during construction of a housing development for a subdivision in the area, a worker with earth-moving equipment exposed the bones.  Someone recognized a mammoth tooth and construction at the site completely stopped.  Professional paleontologists were called in for further investigation and a complete mammoth skull and tusk were also found.  Donations led to building over the site to protect and allow the additional work to be done in a climate controlled environment and the site was designated in 1980 as a National Natural Landmark.  Run by a non-profit organization, the ongoing excavations are staffed by scientists from around the world and volunteers with an adjacent museum open to the public.  The bones and other fossils found are identified, numbered, cataloged and preserved with almost all remaining “in-situ”, which means that they remain where they are found in the sinkhole and not removed.  As of 2012, at least 60 mammoths have been identified with the majority being Colombian Mammoths but three Wooly Mammoths have also been found which marks the first time both species have been found in the same area.  Over the years researchers have determined by measuring the pelvis bones that most of the mammoths are young males.  The hypothesis is that based on the observations of current matriarchal elephant groups in which competing males can be frequently expelled from a group, these young mammoths were likely to be involved in taking risks and this behavior led to their entrapment in the ancient pond.

The Mammoth Site is open year-round and most visitors begin with a 30 minute guided tour.  After the tour, visitors can walk along area on the sidewalks located above the dig area.  This is very exciting because you get to see exactly where the bones were found.  The other areas in the museum include several exhibits and a window view into a working paleontology laboratory in the Ice Age Exhibit Hall.  There are also numerous films in the theater which cover the geology and history of the Mammoth Site and the people and animals that lived here during the Ice Age.  When we visited, our daughter was pre-school age and her attention span was very short.  We highly recommend a visit with school-age or older children, especially boys will love the Mammoth site.  We would suggest that you allow at least an hour or two to tour the site and see the exhibits and films.

Please check ahead for further information on hours and prices at the Mammoth Site website, www.mammothsite.com. 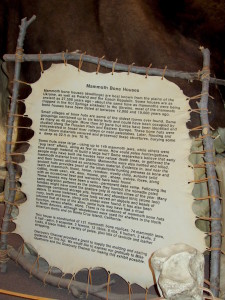 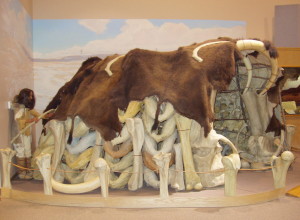 The Black Hills of South Dakota has so many historic places to visit and the scenery is absolutely beautiful in this area of the United States.   When we visited in 2004, we stayed for a week because there was so much to see and do.  Custer State Park was our “home base” with daily trips to see several nearby attractions.  Please see last month’s Travel post, Custer State Park, and this month’s posts on Mount Rushmore & Crazy Horse, Wind Cave and Jewel Cave for reports on the other sites to see in Black Hills of South Dakota.