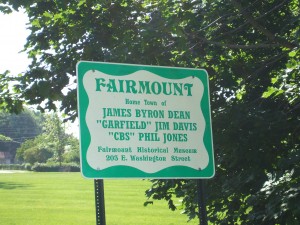 I have been a James Dean fan since I was a teenager living in Southern California.  So when we moved to the Midwest, within a couple of hours away from Fairmount, Indiana I knew we had to make a trip there.  Since reading several biographies about his life and career, it seemed strange to actually be visiting his hometown and seeing all the places I had read about but it was very exciting for this long-time James Dean fan!

So, in 2008 we took a quick drive over to Fairmount.  The town is small so it is very easy to drive to all the James Dean landmarks around the area.  A good place to start is the Fairmount Historical Museum which had a great collection of James Dean memorabilia, such as: newspaper clippings, family photos and letters, Dean’s personal clothing and items from his life in New York and Hollywood.  Next, we went to see the old Fairmount High School where Dean graduated in 1949 and as a student he excelled in drama, art and athletics.  The building is now abandoned and at the time we visited in 2009 there was a fence surrounding the building. 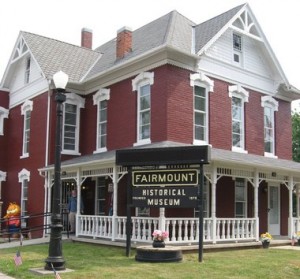 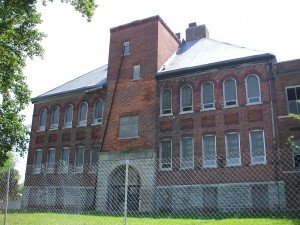 A short drive away is the small James Dean Memorial Park.  Dedicated in 1995, 40 years after Dean’s death, the park was funded mostly by donations from his fans.  During the month of September, James Dean fans come from all over the world to this small town in Indiana for several days of local events to mark the life and death of this iconic movie actor.  The centerpiece of the park is a six foot high column with a special tribute plaque which is topped by a bronze bust of James Dean.  The story goes that shortly before his death; Dean had visited the studio of artist Kenneth Kendall because he admired a sculpture the artist had done of Marlon Brando.  Dean commissioned the artist to create his sculpture and Kendall, in a strange coincidence, began the work on the night of Dean’s death.  There is a duplicate of this statue located in Los Angeles, CA at the Griffith Observatory where Dean filmed several scenes from the movie, “Rebel Without a Cause”, including the famous knife fight scene.  The statue is located on the west side of the Observatory with a fantastic view of the Hollywood sign. 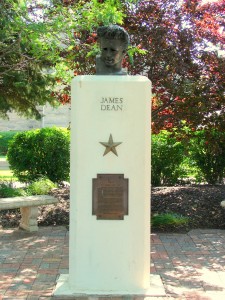 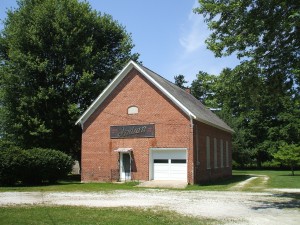 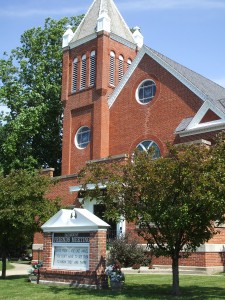 Other James Dean landmarks in the Fairmount area include the motorcycle shop where Dean bought his first motorcycle and the Friends Church where Dean’s funeral was held in 1955.  Every year on September 30 to mark the anniversary of Dean’s death, a memorial service is held at the church for all Dean’s devoted fans that come from around the world for the James Dean Festival.  Located just outside of Fairmount is the Park Cemetery where Dean is buried next to his mother and father, Mildred and Winton Dean.  Also buried nearby are Marcus and Ortense Winslow, Dean’s Aunt and Uncle and he lived with from the age of nine to eighteen.  I am told that the Winslow family still owns the house and farm and it is located less than a mile from the cemetery. 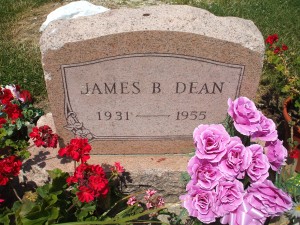 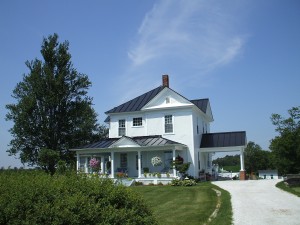 Visiting Fairmount, Indiana and seeing these places was very exciting for this long-time James Dean fan!

SPECIAL TRAVEL NOTE:   All the sights mentioned can be seen year-round but a great time to visit is in late spring or summer when the weather is good.  Please note that the James Dean Festival is held every year in late September and Fairmount can be very crowded with fans coming from around the world.

The Brief Life of James Dean

James Bryon Dean (Born: February 8, 1931 Died: September 30, 1955) was a Broadway, television and film actor.  He was born in Marion, Indiana but the family moved to Santa Monica, California when he was six years old.  At the age of nine, Dean’s mother died and his father sent him to live with an Aunt and Uncle Winslow who owned a small farm near Fairmount, Indiana.

Dean briefly returned to California after his high school graduation to reunite with his father and enrolled in UCLA before he realized his true desire was to pursue an acting career.  Eventually Dean went to New York to become a Broadway stage actor and he also appeared in several early television programs.  He returned to Hollywood to make movies in the early 1950s.  He starred in only three films during his brief movie career.  His first film, “East of Eden”, was based on the classic John Steinbeck novel.  His second film, “Rebel Without a Cause”, proved to be his most successful movie in which he played his most famous role as a rebellious teenager.  His final film, “Giant”, was released after he was tragically killed in a car accident in 1955.  Because of the high risk involved, Dean was prevented from participating in his favorite sport, car racing.  After “Giant” had completed filming, he had entered a race in Salinas, CA and was on his way there when a tragic accident happened and he was killed, Dean was only 24 years old.

In 1997, a wealthy Japanese business man and devoted fan erected a stainless steel James Dean memorial sculpture in Cholame, California which is about a mile from where Dean’s car accident took place.  In 2005, on the 50th anniversary of the actor’s death, at the intersection of Highway 41 and 46 in Northern California, the site of the accident was renamed by the State of California to the James Dean Memorial Junction.