In this next installation of the five part Disneyland series I will discuss New Orleans Square and Critter Country which are two “lands” that were added several years after the park originally opened in 1955.  New Orleans Square is a lively and festive area located on the banks of the Rivers of America where two of the most popular rides, the Haunted Mansion and the Pirates of the Caribbean attractions in Disneyland can be found, while in Critter Country there is the exciting thrill ride, Splash Mountain.

New Orleans Square opened in 1966 and was part of Walt’s idea that Disneyland would always be forever changing and growing with new attractions.  At the dedication ceremony, Walt joked that creating New Orleans Square cost almost as much as the original price of the Louisiana Purchase but sadly this occasion was the last public appearance by Walt before he died in December 1966.  The almost three acre area located adjacent to Frontierland cost an estimated $18 million to complete and the design and architecture was inspired by the antebellum era of New Orleans with its classic ironwork and narrow streets filled with restaurants offering delicious creole food and small little shops selling all kinds of souvenirs.  Located on the second floor over the Pirates of the Caribbean show building there was once a large apartment that was built for the Disney family, look for the initials of both Walt and Roy Disney in the intricate ironwork on the balcony overhead.  Since that time, it has been used as the Disney Gallery store which also featured various ongoing exhibits of Disneyland and this area is currently available to special guests as the only “overnight” accommodations within the park; it is known as the Disneyland Dream Suite. 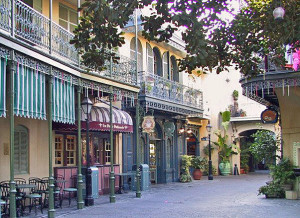 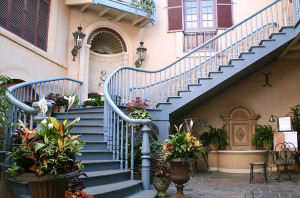 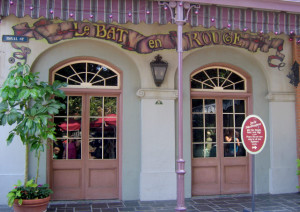 The next two photos are of the exclusive Disneyland Dream Suite 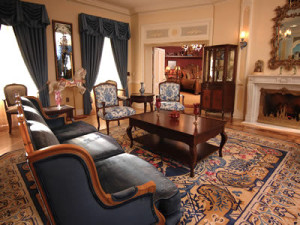 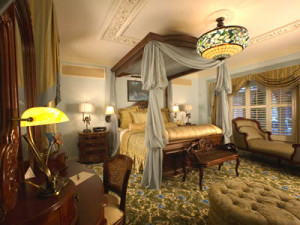 The first attraction that guests will see upon entering New Orleans Square is the Pirates of the Caribbean ride, it was the last ride that Walt personally oversaw the development and construction and the attraction opened in 1967 three months after his death.  Pirates is a dark ride where guests ride boats through various scenes that feature a band of pirates that pillage and loot their way through small towns of the Caribbean while singing the attractions famous song, “Yo Ho, a Pirates life for Me”.  With success of the “Pirates of the Caribbean” movie series, in 2006 the character of Jack Sparrow was added to several scenes within the attraction, the audio-animatronic figure is very realistic and a perfect likeness to the character as played by Johnny Depp in the films.  Also if you have any pirates or wenches in your group while visiting the park, don’t forget to check out the 2007 refurbished of Tom Sawyer Island which is now the current location known as the Pirate Lair.  (Travel tips: #1. Located on the path from Adventureland into New Orleans Square, look for Lafitte’s anchor, which has infamously been said to be the one used on his pirate ship in the Battle of New Orleans, but this could be one of those urban rumors!! #2. While in the boarding area of the ride, look for the sign overhead that reads “Lafitte’s Landing” which is also a reference to the famous pirate, Jean Lafitte, that once roamed the Caribbean.  #3. Located in the interior of the Pirates attraction is the adjacent Blue Bayou restaurant which is famous for their Monte Cristo sandwiches, be sure to make a reservation for this popular Disneyland restaurant prior to your visit through the Disneyland Resort Reservations line which can be reached at 714-781-3463 and reservations can be made up to 60 days in advance of a visit)  For more detailed information about the Pirates of the Caribbean ride, please click on the link. 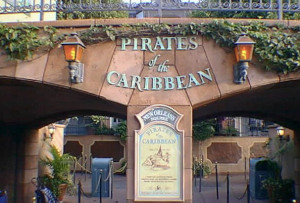 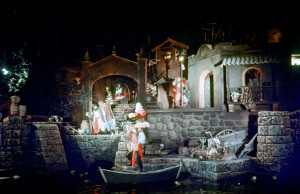 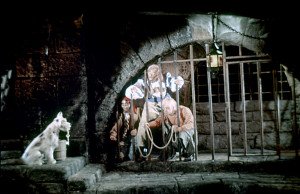 Located on the other side of the Disneyland Railroad New Orleans Station is the Haunted Mansion attraction, one of the most popular rides in Disneyland and features a ride on the patented Omnimover vehicles, also known as “Doom Buggies”, which take guests through a not-so-spooky haunted house filled with audio-animatronic ghosts and a variety of other special effects.  (For more detailed information on this New Orleans attraction, please click on the link, Disneyland’s Haunted Mansion, which was originally posted in October 2013) 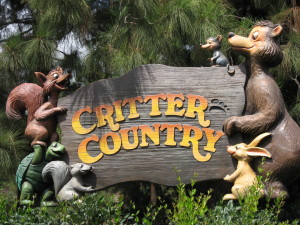 Critter Country is located in the area of Disneyland that was formerly a part of the old Frontierland called Indian Village. The Indian Village was originally the site inspired by the Native Americans culture of the old western frontier and where there were daily demonstrations of their dances and other customs; it was also the original site of an attraction called the Indian War Canoes.  Indian Village closed in 1971, refurbished and expanded into a new re-themed four acre area that reopened in 1972 as Bear Country.  The Country Bear Jamboree became the main attraction in this area of the park and featured audio-animatronic bears and other animals that put on a fun musical show.  Also located to this new section of the park were the new Hungry Bear Restaurant and the renamed Davy Crockett Explorer Canoes.  In 1988, Bear Country was renamed Critter Country and a year later Splash Mountain opened and instantly became one of Disneyland’s most popular thrill rides.  Eventually the Country Bear Jamboree closed in 2001 and was replaced two years later by a new attraction called the Many Adventures of Winnie the Pooh. 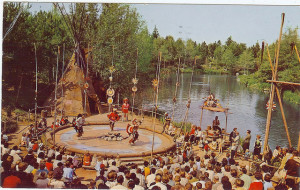 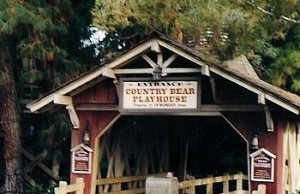 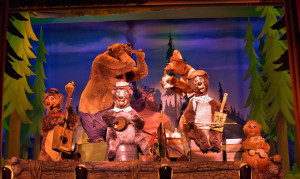 As previously mentioned, the Davy Crockett Explorer Canoes were originally located in the old Frontierland Indian Village.  The 35 foot long canoes hold up to twenty guests, not including the two cast member guides at the front and the back of the boat.  The ride takes guests on a circular route that travels 2,400 around Tom Sawyer Island and, since the canoes are free-floating in the Rivers of America, the length of the trip depends on how fast the guests can paddle, the attraction operates seasonally and shuts down with inclement weather and also does not run at night.

Splash Mountain opened in 1989 and is based on the 1946 Disney film “Song of the South”.  As the $75 million cost of the attraction’s construction went severely over budget, there was an idea presented at that time to refurbish the characters from the recently closed America Sings attraction in Tomorrowland.  Splash Mountain takes guests on an fun ride in flume logs as they gently float past several scenes recreated from the movie, the basic storyline is that Brer Rabbit is on a search for his special “laughing place” but encounters some trouble from Brer Fox and Brer Bear along his journey, until the exciting 53 foot steep drop that takes guests into the briar patch and concludes with a final scene of all the audio-animatronic characters singing the song “Zip-A-Dee-Doo-Dah” in celebration that Brer Rabbit is safe!  (Travel tip: Located on the ride, shortly before entering the interior scenes of the attraction, listen closely for the sounds of snoring coming from Brer Bear’s cave, this is a tribute to the original entrance to the old Bear Country that had a bear named Rufus also snoring in his cave) 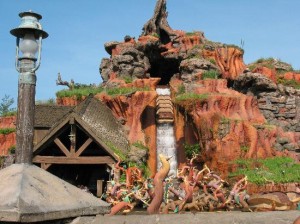 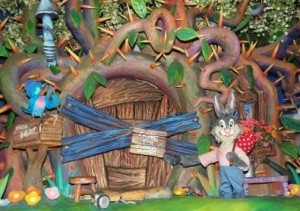 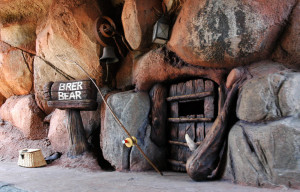 The most recent attractions added to Critter Country is The Many Adventures of Winnie the Pooh ride which opened in 2003.  The Disney Studios has made several animated films based on the series of books by A.A. Milne about Winnie the Pooh and his friends from the Hundred Acre Woods and the ride features various scenes from the stories with colorful audio-animatronics and other delightful sights and sounds.  During the 1983 Fantasyland major refurbishment there was briefly a proposed Winnie the Pooh ride but it was never built and the attraction was eventually placed in Critter Country on the site of the former Country Bear Jamboree which closed in 2001.  Located just outside of the attraction, the Winnie the Pooh, Eeyore and Tigger characters are usually available to greet guests, take photos and give autographs, but be prepared because the line is usually long and very slow moving.  (Travel tips:  Look for the figure of Winnie the Pooh floating up and down attached to the string of a balloon, this mechanism at one time lowered “Teddi Barra” from the ceiling in the old Counrty Bear Jamboree attraction.  Also when entering the final scene of the ride, look backwards and over the doorway the vehicle just passed through are the three “trophy” heads of Max the buck, Buff the buffalo and Melvin the moose that were once used in the Country Bear Jamboree that were placed there as a tribute to the former attraction) 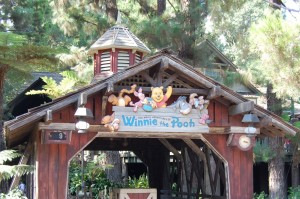 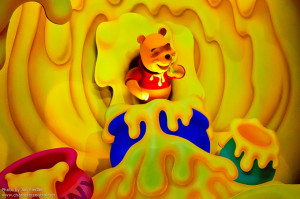 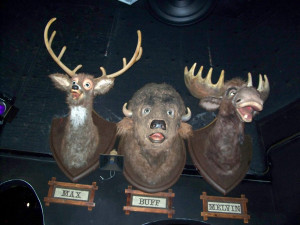 This post completes the tours of New Orleans Square and Critter Country but be sure to check out the four additional posts in the Disneyland series.  Part One – The history of Disneyland, Part Two – Main Street and Fantasyland, Part Three – Adventureland and Frontierland, Part Five – Tomorrowland and Mickey’s Toontown.