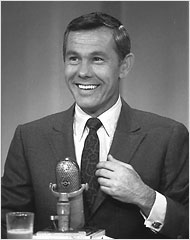 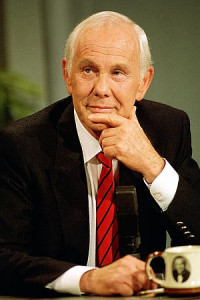 I enjoyed watching Johnny Carson on “The Tonight Show”, I thought his monologues had clever jokes about current topics, I liked when he performed the Carnac the Magnificent skits and of course I loved when his guest was Joan Embery from the San Diego Zoo and she would bring interesting animals to the show.  In my personal option Johnny Carson was a one of a kind late night talk show host and nobody on television today even comes close to his talent except maybe Jimmy Fallon.

John “Johnny” William Carson (Born: October 23, 1925 Died: January 23, 2005) was an American talk show icon who hosted “The Tonight Show” from 1962 to 1992.  His casual manner and great conversational skills made him one of the most successful television hosts for thirty years.  During his long career Carson received six Emmy Awards and he was inducted into the Television Academy Hall of Fame in 1987.  In 1985 Carson received the Peabody Award, in 1992 he was awarded the Presidential Medal of Freedom and in 1993 he received a Kennedy Center Honor. 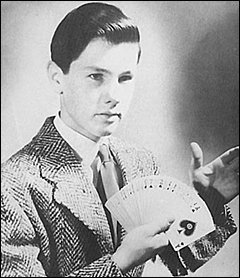 Carson was born in Corning, Iowa and his family moved to Norfolk, Nebraska when he was eight years old.  At the age of twelve years old he was inspired by a book of magic that he had read and sent away for a mail-order magician’s kit.  He practiced constantly and performed for his family and friends.  When he was fourteen years old he started performing a local events and county fairs.

In 1943, after graduating from high school, Carson joined the U.S. Navy.  World War II was still being fought and after officer training Carson was assigned as an ensign aboard the USS Pennsylvania, he served as a communications officer in charge of decoding encrypted messages.

After the war, Carson returned to Nebraska and continued his college education at the University of Nebraska.  He graduated in 1949 with a Bachelor of Arts degree in radio & speech with a minor in physics.

In 1950, Carson took a job in Omaha hosting a morning program at the local radio station.  He continued to perform his magic act in the evenings at local events.  A year later, Carson decided he wanted to move to California to find work in the new entertainment field of television.  He found a job at a local Los Angeles television, it was a CBC low budget comedy show called “Carson’ Cellar which ran from 1951 to 1953.

In 1953, Red Skelton hired Carson to become a writer for his show.  A year later, just before show time Skelton had an accident and was unable to perform and Carson filled in for him and was a great success.  Then in 1955, Jack Benny invited Carson to appear on his show as a performer and was once again a huge success. Benny predicted that Carson would go on to have a great career as a comedian … I think he was right!

Carson went on to host other shows based in California and he was a regular on the original “To Tell The Trust” game show until 1962.  He then moved to New York City to take a job hosting the game show “Who Do You Trust?”  At this time Carson met Ed McMahon on this show when McMahon was hired as the show’s announcer, their friendship lasted 46 years.  Carson worked on the game show for five years and it was the first time he was able to use his clever on-camera wit to ad lib and interview guests, the show was a great daytime television hit.

In 1962, NBC invited Carson to fill in for the soon to be departing Jack Paar of “The Tonight Show”.  He originally declined the offer because he was fearful of the longer daily format.  Eventually he accepted the offer and he officially became the host on October 1, 1962.  The first year was very difficult as he tried to develop the show but the rating slowly began to improve.  Ed McMahon was brought in as the announcer and with his classic line, “Heeeer’s Johnny” he would introduce Carson who would open the show with a brief monologue filled with jokes and funny stories on the current topics of the day and he would always end the monologue with his icon golf swing as they would cut to the commercial.  After the commercial break, there would sometimes be a comedy sketch followed by guest interviews and sometimes a musical segment.

In 1972, “The Tonight Show” was moved from New York City to “beautiful downtown” Burbank, California.  Carson had stopped doing the show five days a week by this time and for the Monday night show there would a guest host.  In the 1980s the show format changed from 90 minutes to an hour program.  Although Carson work schedule was shorter his salary at NBC continued to rise and by the 1970s he had become the highest paid person on television.

“The Tonight Show with Johnny Carson” launched the many careers and the list of comedian that got their start on the show is very impressive: David Letterman, Jay Leno, Joan Rivers, Jerry Seinfeld, Tim Allen, Rosanne Barr, Ellen DeGenneres and Drew Carey.  It was always the highlight of a comedian’s career when Carson liked their stand-up routine and invited them over for a chat afterwards, allowing them extra time to show their stuff!

Carson officially retired from show business and his final “Tonight Show” was May 22, 1992.  Prior to that final show and in the weeks leading up to the event, Carson invited some of his favorite guests from the last thirty years.  The night before the final show, his last two guests were Robin Williams and Bette Midler.  Williams gave one of his usual zany, high energy performances and Midler sang a few of Carson’s favorite songs.  The last song she sang was “One for My Baby (and One More for the Road)” and everyone was very emotional, even Johnny Carson!

The final show had no guests and it was a retrospective show with clips from some of his favorite moments over the last thirty years.  The studio audience that night was by invitation only and was “Tonight Show” family and friends.  More than fifty million people watched the finale and Johnny Carson ended the show with a heartfelt thank you to Ed McMahon, Doc Severinsen and the “Tonight Show” crew.  He also thanked the television viewers for inviting him into their homes and then he said good night. 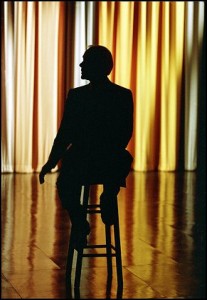 Post retirement, Carson made occasional appearances.  Two special ones were the 1993 Bob Hope NBC Special and in 1994 he made a guest appearance on the “Late Show with David Letterman”.  He also was seen at the Wimbledon Tennis Competitions, at his home in Malibu or in Marina del Ray on his 130 foot yacht, the “Serengeti”.

Throughout his life Carson was a very heavy smoker, in fact in the early days of the “Tonight Show” Carson would often smoke on camera.  In 1999, Carson suffered a severe heart attack and underwent a quadruple bypass surgery.  In 2002 it was publicly revealed that Carson had a terminal illness.  Carson died on January 23, 2005 from respiratory failure brought on from emphysema, he was 79 years old.  International tributes came from around the world but there was no public memorial service.