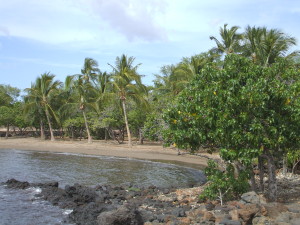 In celebration of this date in history when Hawaii officially became the 50th State, I would like to share the history of the islands and offer some travel suggestions for each of the main islands that have become known as the Hawaiian Islands.

Hawaii became a state on August 21, 1959 and is the 50th state of the United Sates.  The state is unusual because unlike the “mainland” United States, the state of Hawaii is actually a group of six main volcanic islands that are located in the middle of the Pacific Ocean.  The islands are Hawaii (also known as the Big Island), Maui, Oahu, Kauai, Molokai and Lanai.  Several smaller islands are also included within the state of Hawaii and are not as well known as the major islands in the chain and generally are not included as tourist destinations. 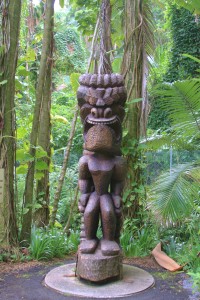 Anthropologists have found archaeological evidence that dates the earliest human inhabitants on the islands of Hawaii were originally Polynesians from the Marquesas Islands and they arrived on the islands as early as 300-500 AD, there is an ongoing debate regarding a more specific date of the first arrival.  The Polynesians arrived on the shores of Hawaii in double hulled canoes which travel over 3,500 miles across the Pacific Ocean from their original home.  Living in this new land, they lived in harmony with nature and were able to provide seafood to eat while still being careful to conserve the fish in the reefs or streams and to never abuse the land which provided their crops.  These new Hawaiians eventually learned to govern themselves under a set of rules called the Kapu system, and the first chief, Pa’ao, introduced the building of heiaus (Hawaiian temples) and the practice of human sacrifices.

In 1778, Captain James Cook, a British explorer, sailed into Waimea Bay on Kauai becoming the first European to visit the Hawaiian Islands.  Cook returned to the islands again in 1779, this time sailing into Kealakekua Bay on the “Big Island” of Hawaii.  After eight weeks of exploration of the islands, Cook prepared to leave but the foremast of his ship broke and he returned to Kealakekua Bay for repairs. At this point, tensions suddenly grew between the Hawaiians and Cook’s crew and eventually a group of Hawaiian took one of Cook’s smaller boats.  In retaliation Cook’s crew attempted to take Kalaniopuu, the Hawaiian chief, as a hostage in hopes to reclaim their boat in exchange. To prevent their King from being abducted, the Hawaiians attacked Cook and his men as they tried to launch their boat in an attempt to flee and in the confrontation Cook was killed. 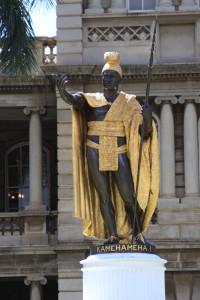 At this point in the history of Hawaii, each island still had several chiefs and there was no single ruler that controlled all the islands.  Then, a young chief named Kamehameha set out to conquer the other chiefs.  By 1791, he defeated the chief on the Big Island and by 1795 he had conquered and gained control of the islands of Maui, Molokai, Lanai and Oahu.  In 1810 the chief that ruled Kauai finally pledged his loyalty to Kamehameha who finally came to rule as the first King of Hawaii.  Kamehameha ruled Hawaii with complete control and tried to prepare and protect the Hawaiian people for the Europeans that were starting to come to the islands in increasing numbers.  Unfortunately the King could not protect them from disease and the Hawaiian population decreased by 80% from influenza, typhoid fever and measles during this period.

In 1820 the first Christian missionaries arrived and changed the islands forever.  With the end of the Kapu system and their conversion to Christianity, the ancient Hawaiian temples were destroyed and replace with Christian churches.  The missionaries also brought reading and writing to Hawaii, which was important because prior to this time there was no written language of the Hawaiian people.  In 1840 the Hawaiian Parliament and the Supreme Court were formed and a constitution was written.  By 1843, land was available for purchase and for the first time foreigners could own land on Hawaiian Islands. 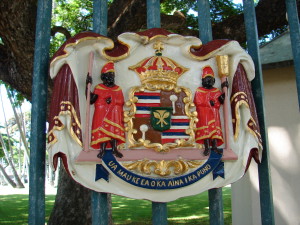 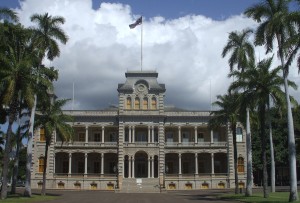 By this time in the history of Hawaii, there had been a succession of Kings who lived in their own houses during their reigns until finally in 1882 Iolani Palace was built on Oahu and it became the official residence of the Hawaiian monarchy.  King Kalakaua was the first monarch to live in the palace.  During the past decades, Hawaii had experienced a great agricultural boom which brought many immigrants from Japan, China and the Philippines to work in the sugarcane and pineapple fields which were under the control of American entrepreneurs; also the U.S. military became a presence in the region during this same period.  Unfortunately, this foreign influence greatly dominated the islands and the King sadly became aware that the Hawaiian native culture was starting to be lost and he set a course to preserve the Hawaiian traditions and customs.  When he died in 1891 his sister became Queen Lilliuokalani.  During her brief reign she attempted to institute a new Hawaiian constitution that would strengthen the Hawaiian monarchy and reduce the oppression of native Hawaiian people, the conflict between royalty and the native Hawaiian and the American businessman only continued to grow.  Finally, in order to protect their businesses, the American entrepreneurs seized control of the islands with the aid of the U.S. military.  In 1893 Queen Liliuokalani was overthrown, imprisoned and forced to sign a document relinquishing her power.  She underwent a public trail and was found guilty, fined and sentenced to 5 years of hard labor.  This sentence was later changed to house arrest in the Iolani Palace where she was forced to live in only one of the rooms, she served an additional year under house arrest but the remaining condition was that she was forbidden from ever leaving the island of Oahu. 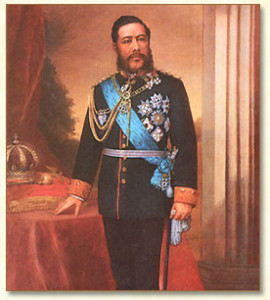 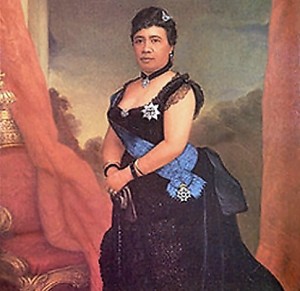 At this period in the history of Hawaii, the Republic of Hawaii was formed and eventually in 1898 the U.S. government claimed the Hawaiian Islands as a U.S. territory.  Then sixty years later in 1958 the voters of Hawaii approved statehood and on August 21, 1959 Hawaii officially became the 50th state of the United States. 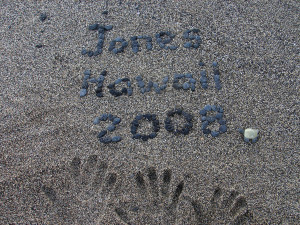 Hawaii’s diverse natural scenery of sandy beaches and clear ocean waters, tropical plants and beautiful flowers, active volcanoes and warm climate that is perfect for outdoor sports such as surfing and scuba diving or snorkeling, all these things make Hawaii a wonderful vacation destination.  We have been fortunate to have visited Oahu and the “Big Island” of Hawaii in October 2008, my husband had visited several of the islands before but this was the first trip for both my daughter and I to Hawaii. 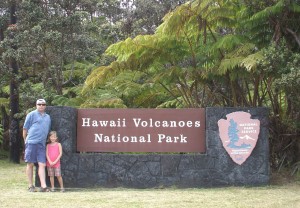 Maui is the second largest island with a total area of 727 miles; the highest point is Haleakala at 10,023 feet.  The largest town is Wailuku; other cities are Lahaina and Hana.  Maui is known for the beaches and lowlands with several mountain ranges divided by spectacular valleys. 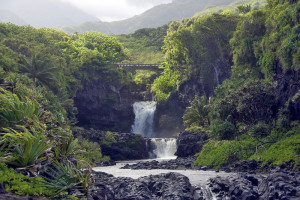 Oahu is the third largest island with a total area of 597 miles but has the largest population of the six islands.  The largest city is Honolulu and it is the state capital of Hawaii and the center of the state’s government and economy.  Pearl Harbor is home to the largest U.S. Naval fleet in the Pacific.  Oahu has two main mountain ranges separated by a valley and coastal plains.  The North Shore of the island is also a preferred tourist destination and it is less congested than Honolulu.  During our stay on Oahu we visited two very popular tourist destinations.  (If you are interested, please check out these two Travel posts:  Pearl Harbor, Hawaii and the Polynesian Cultural Center) 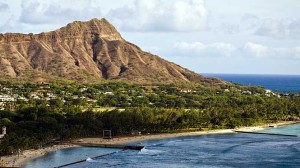 Kauai is the fourth largest island with a total area of 562 miles and the highest point is Kawaikini at 5,243 feet.  It is the oldest of the six main islands as it is located the farthest from the hotspot that formed the islands.  Kauai has several mountain ranges, steep cliffs and rugged coastlines and it is known as the Garden Island due it the lush landscape.  Cities on the island include Hanalei, Hanapepe. 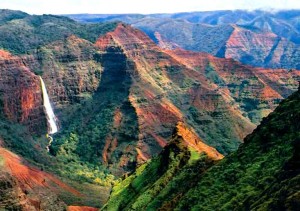 The island of Molokai covers 260 square miles and the highest point is Kamakou at 4,961 feet.  There are two mountain ranges, the East Molakai and the West Molokai, on the island and these are extinct volcanoes.  Molokai is also known for their beautiful coral reefs.  The major city is Kaunakakai. 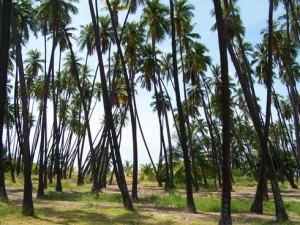 The island of Lanai covers 140 square miles and the only town on the island is Lanai City.  Lanai is known as the Pineapple Island because in the past the island was completely covered by a pineapple plantation but today the island is mainly undeveloped and many of the roads are unpaved. 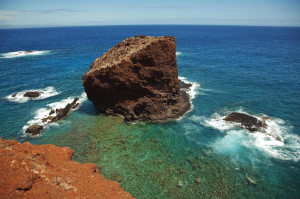