Date and location: April 26, 1923 at Westminster Abbey in London

Prince Albert, known to his family as Bertie, was the second son of King George V.  Bertie had fallen in love with Lady Elizabeth Bowes-Lyon and proposed to her several times over the course of several years but she was very hesitant to accept because she had great misgiving about joining the royal family, but finally she accepted in 1923.  Like all royal marriages, this union needed the approval of the King and the bridal choice was very unusual at the time because normally princes were expected to marry princesses; Elizabeth was not considered royal and she was only the daughter of a British peer. 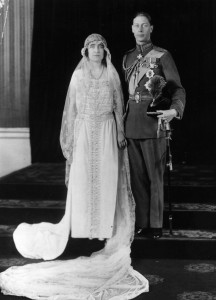 As it has seemed customary for British Royal weddings, the weather was projected for rain but over a million people gathered along the parade route from Buckingham Palace to Westminster Abbey.  As the invited guests began to arrive, the bells of the Abbey had already been ringing for four hours prior to the start of the service. Shortly before the start of the service the aged but still elegant Queen Alexander, grandmother of the groom, arrived with her sister, Dowager Empress Marie of Imperial Russia.  (Sadly it is her son, Tsar Nicholas II, along with his wife and family who had tragically died six years earlier during the Bolshevik Revolution which brought an end to  the reign of the Romanov Dynasty)

On the morning of the wedding, the twenty-two year old bride departed for Westminster Abbey to meet her twenty-seven year old groom from her family home on Burton Street located near Berkeley Square in London.  The maroon and gold 1920 State landau was pulled by four perfectly matched grey horses and as it arrived at the Abbey the sky cleared and the sun came out casting light through the beautiful stained-glass windows.

Then, prior to the start of the wedding ceremony, an unexpected and spontaneous gesture by Elizabeth was to start a royal tradition that has continued throughout the years.  On her way to the altar, Elizabeth set her bouquet of white roses, lilies of the valley and heather at the Tomb of the Unknown Soldier which is located near the entrance of the Abbey.  She wanted to honor her brother, Fergus, who had died in World War I and she placed the bouquet there in his memory.  Since then, the bouquets of royal brides have traditionally been placed at the tomb with the one exception that is done after the wedding ceremony rather than before.

Lady Elizabeth’s wedding dress was unlike other recent royal brides and it was designed in a simple medieval style made from ivory chiffon moiré designed by Madame Handley Seymour.  The dress featured a square neckline with a bodice that was cut straight to the waist and decorated with horizontal silver lame panels that were heavily gold embroidered with pearl and paste beads.  The antique ivory point of Flanders lace veil was secured with a simple wreath of myrtle leaves with a cluster of white York roses and white heather positioned on either side of her head.  The veil was presented from the bride’s future mother-in-law for the bride to wear on the wedding day. 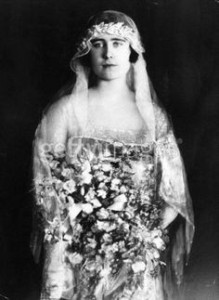 After the wedding ceremony, the bridal couple and their guests gathered at Buckingham Palace for a lavish breakfast.  Then the new Duke and Duchess of York left London for an extended honeymoon first in Surrey at Polesden Lacey and then at Glamis Castle, the bride’s ancestral home of the Strathmore family, which is located in Scotland.

The wedding of Prince George and Lady Elizabeth also set another precedence for royal weddings when it was filmed with the footage of the event shown later in theaters throughout the country.  Prior to then, royal weddings were strictly private events and the bridal party was only seen traveling to and from the venue and sometimes there was the occasional public appearance on the balcony at Buckingham Palace after the ceremony.

Date and location:  November 20, 1947 at Westminster Abbey in London 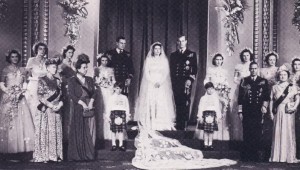 Princess Elizabeth meet her future groom when she was just a young girl, she was only 13 years old when she fell madly in love with the dashing naval officer and the two began to exchange letters.  Almost ten years later, in July of 1947, after Princess Elizabeth returned from a long trip to South Africa with her parents their engagement was officially announce to the public.

Princess Elizabeth received a beautiful diamond engagement from Phillip.  The large 3-carat diamond originally came from the tiara that had belonged to Phillip’s mother.  Phillip was personally involved in the designed that also included eleven additional diamonds.

At the time of the Royal wedding, World War II had recently ended two years before but coupon rationing was still in effect.  After the engagement was announced, thousands of clothing coupons were received at Buckingham Palace to assist in making the wedding dress but it was illegal to transfer coupons and they were rightfully returned with a personal letter from Princess Elizabeth thanking them for their thoughtfulness. 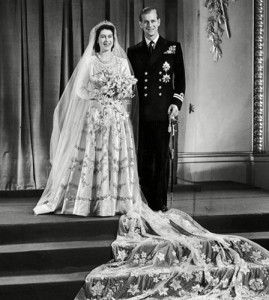 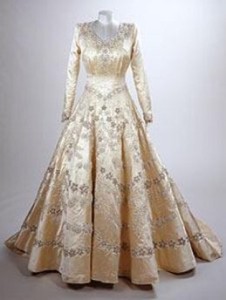 Norman Hartnell, the Royal Designer, received the commission to create Princess Elizabeth’s wedding dress.  He designed a lovely gown of ivory duchess satin with a fitted bodice and full skirt that extended into a 15 foot train.  Princess Elizabeth completed her bridal attire with white silk tulle veil held in place by the diamond King George III Fringe Tiara.  While preparing for her wedding day the frame of the tiara broke in half but luckily the royal jeweler was called in to quickly make the repair before the ceremony.

Princess Elizabeth’s bridal bouquet was made by the local British florist Longmans from three different kinds of British-grown orchids; cattleya, odontoglossum and cypripedium.  A sprig of traditional myrtle was picked from the garden at Osborne house and was also added to the bouquet.

On the day of the wedding day Prince Phillip arrived dressed in his naval uniform and accompanied by his cousin David Mountbatten, the Marquess of Milford Haven. The next to arrive at the Abbey were the bride’s mother, Queen Elizabeth and grandmother Queen Mary, then the bride’s eight bridesmaids, including Princess Margaret, who were wearing dresses designed by Hartnell.  Finally, Princess Elizabeth and her father, King George, arrived from Buckingham Palace traveling in the magnificent golden Irish State Coach.  Finally, on the arm of her father, as the trumpets played, they slowly walking down the nave to the altar steps to meet Prince Phillip.  The hour long ceremony included vows from the Book of Common Prayer and per the bride’s request, the service was the same as her parent’s wedding service which happened almost twenty-five years earlier in the same Abbey.

At the conclusion of the service, the new Duke and Duchess of Edinburgh entered the Chapel of Edward the Confessor to sign the register officially recording their marriage.  King George, Queen Elizabeth and also Queen Mary and Princess Andrew, the groom’s mother, also signed the register.  Immediately following the service the bridal party exited to the sound of Mendelssohn’s Wedding March and then their guests went to Buckingham Palace for a grand wedding breakfast. Afterwards, Elizabeth and Phillip left for their honeymoon spent partly at Broadlands, the Mountbatten home located in Hampshire.