To continue the four part series about the British Royal Weddings, this post will discuss the weddings of two future Kings of England.  The two weddings took place almost 30 years apart and both took place shortly after two tragic deaths in the British Royal family.  The first one was the wedding of Queen Victoria’s oldest son, Prince Albert Edward (later King Edward VII) which took place 15 months after the death of his father.  The second one was the wedding Prince George, the son of King Edward VII and heir to the throne of England, who married Princess Victoria Mary of Teck (later Queen Mary).  She had been previously engaged to Prince George’s older brother, Albert, who had died rather quickly suddenly from pneumonia in 1892. 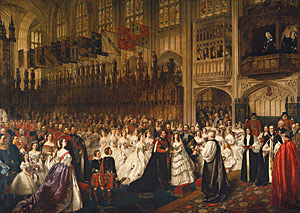 The wedding of Prince Albert and Princess Alexandra came while the Royal court was still in mourning after the unexpected death of Queen Victoria’s husband, Prince Albert in 1861.  The strict rules that dictated the mourning customs of the time meant that the royal court was required to wear shades of grey, lilac or mauve.  Queen Victoria, who was devastated by the death of her husband, was in deep mourning for the loss of her beloved husband, and she wore a black dress for the wedding, wearing black was something that she continued to do for the remainder of her life.  She also refused to take part in the ceremony and watched from a secluded area in the St. George Chapel.

Many years prior to the wedding, Queen Victoria had started the search for a proper bride to calm her mischievous and troublesome son, Prince Albert the Prince of Wales and heir to the British throne. With the aid of her eldest daughter, Crown Princess Victoria of Prussia, they focused their search for a suitable princess and eventually settled on Alexandra of Denmark.  Alexandra was a very timid and humble girl who had led a relatively normal life in Copenhagen, Denmark.  She was tall in height, slim and very beautiful but despite her simple wardrobe she was said to have a wonderful and elegant sense of fashion.  (As Princess of Wales and then later as Queen, Alexandra would ultimately set the clothing style for England during the late Victorian and Edwardian period.  For more information on the subject, please click on the link Queen Alexandra – the Fashion Icon)

Albert and Alexandra were introduced by his sister in September 1861, but unfortunately Albert was only mildly interested.  At the time, Albert had been in military training in Ireland with the Grenadier Guard and he had become romantically involved with an Irish actress named Nellie Clifden.  Albert had moved onto his studies at Cambridge University and the scandalous news was starting to circulate in the royal court.  His father became aware of the disastrous situation and eventually confronted Albert about his improper behavior.  It has been said that while father and son took a long walk in the rain along the streets of Cambridge discussing the situation, his father became gravely ill afterwards and died a short time later.  For this reason, Queen Victoria blamed her son for causing the death of her beloved husband. Although, much later it was proven that he had been suffering from chronic long term stomach problems (possibly abdominal cancer) which were further compromised by his heavy workload causing severe fatigue. 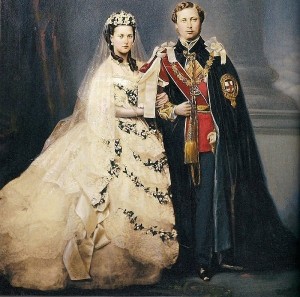 So, after the death of Prince Albert’s father and a brief period of mourning the wedding date was set and negotiations for the marriage contract were finalized. At the time of the marriage, Prince Albert was 21 years old and he choose his brother-in-law, Crown Prince Frederick of Prussia as his best man.  Princess Alexandra was 18 years old and she wore an elaborate ivory silk taffeta wedding gown which featured a separate bodice top and a full skirt that had an overlay of Honiton lace and the skirt featured a 21 foot train of silver moiré.  The dress was trimmed with orange blossoms and the Princess also wore a white Honiton lace veil that was secured on her head by a wreath of orange blossoms and myrtle.  To complete her bridal ensemble, Princess Alexandra wore diamond and pearl necklace, earrings and brooch that were given to her as a wedding gift from her groom.  She also wore an opal and diamond bracelet which was a gift from Queen Victoria.  The bouquet that she carried on her wedding day was made of white rosebuds, lilies of the valley, rare orchids and the traditional sprig of myrtle.  (For more information about how the tradition of adding myrtle to the bouquets of British Royal brides, please click on the link to British Royal Weddings (Part One) 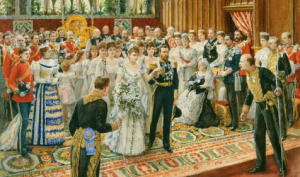 Princess Mary of Keck had been engaged to Prince Albert, the eldest son of Prince Albert (later King Edward VII) and grandson of Queen Victoria.  Sadly, Prince Albert died suddenly of pneumonia on January 14, 1892.  Queen Victoria was very concerned about the line of succession and was also very fond of Princess Mary.  As a result, she strongly encouraged her grandson, George, to marry his deceased brother’s former fiancé.  (Special Note:  I know it seems very confusing with so many men of the British Royal family to be named Prince Albert but this is something that Queen Victoria insisted on as a way for her descendants to honor her beloved husband!!)

The wedding day for Prince George and Princess Mary was unusually hot but once again the British public gathered along the parade route.  Queen Victoria arrived ahead of the bridal couple dressed solemnly in a black satin dress and wearing the white wedding veil that she had wore on her own wedding day many years earlier, she also wore her unique small diamond crown.  After leaving her carriage she slowly walked the aisle with the aid of a cane to take her seat at the front of the Royal Chapel.  The groom, Prince George arrived dressed in his naval uniform with his almost identical looking cousin, the Tsarevich Nicholas of Russia as well as his father, Prince Albert and his uncle, the Duke of Edinburgh.  The bride, Princess Mary arrived with five children attendants and five bridesmaids.  The bridal party proceeded down the aisle to the music of Lohengrin and the Archbishop of Canterbury performed the ceremony.  Afterwards, the bridal couple kissed Queen Victoria and then proceeded through the streets of London and back to Buckingham Palace for a bridal luncheon. 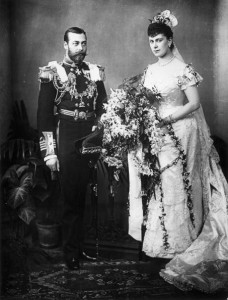 On her wedding day, Princess Mary wore an ivory silk satin dress with a long train.  The dress was accented with a design of roses, shamrocks and thistles in silver thread and, in keeping with the tradition set by Queen Victoria and later Princess Alexandra, the entire bridal dress was made by London manufactures.  The dress also featured Honiton lace and garlands of orange blossoms.  The Princess completed her bridal ensemble by wearing a small veil that was previously used by her mother, Princess Mary Adelaide the Duchess of Teck, on her wedding day in 1866.

For the wedding ceremony, the Princess carried a bridal bouquet made entirely of white flowers.  The bouquet included the “York” roses, orchids, lilies of the valley, carnations, orange blossoms and of course the traditional springs of myrtle.

There is a charming story that on the morning of their wedding Prince George had a glimpse of Princess Mary who he saw in the distance at the end on a long corridor in Buckingham Palace.  The Prince gallantly bowed to the Princess and this sweet memory was remembered and cherished for their long lifetime together.  After the wedding, the newly married couple spent their honeymoon at Sandringham which was the Norfolk estate of the groom’s father.  Despite the unusual beginning of their romance after the death of Prince Albert, the couple grew to be very fond of each other and their marriage proved to be a very successful one.