To conclude the four part series on British Royal Weddings are two of the most famous weddings in recent history.  The first was the wedding of Prince Charles to Lady Diana Spencer in 1981 and it became known as the “wedding of the century”.  The second was the wedding of Prince William and Catherine Middleton in 2011 which also captured the world’s attention almost 30 years later.  Both weddings were equally grand and filled with the traditions, customs and spectacular pageantry that make British royal weddings so wonderfully unique. 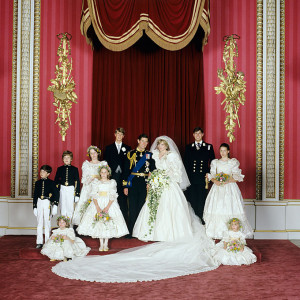 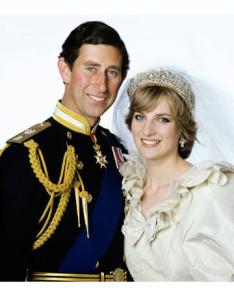 For several years prior to Prince Charles wedding there had been much speculation as to whether the long time bachelor would ever settle down.  Then in 1980, Lady Diana Spencer caught the attention of the Prince and quickly after a six month courtship he proposed to her and their engagement was officially announced on February 24, 1981 at Buckingham Palace.  This occasion was the first time the world saw Diana’s stunning engagement ring, which was a large oval 12 carat blue Ceylon sapphire surrounded by 14 diamonds and in white gold setting.

Since it was the wedding of the heir to the British throne, it took an extensive amount of preparations for the state occasion.  St. Paul’s Cathedral was selected as the site for the ceremony instead of Westminster Abbey because it would hold the 3,500 guests. Royal Note: Westminster Abbey had been the site of many royal weddings over the past decades; most notably Prince Charles’ grandparents, Prince George (later King George VI) and Lady Elizabeth Bowes-Lyon in 1923 and his parent’s, Princess Elizabeth (later Queen Elizabeth II) and Prince Phillip in 1947.  (For more information of these two weddings, please click on the link to Part Three of the British Royal Wedding series

On the wedding day of Prince Charles and Princess Diana, over two million people lined the parade route from Buckingham Palace and Clarence House to St. Paul’s Cathedral. Also, as with most high profile events, security was a major concern and over 4,000 police officers with an additional 2,000 military officers were on duty. There was an estimated 750 million people worldwide that watched the wedding ceremony.

At St. Paul’s Cathedral, crowned or elected heads of state from around the world and all the representatives from the British Commonweaths had gathered.  Prince Charles arrived from Buckingham Palace in the State Landau accompanied by his brother, Prince Andrew. Of course, the last to arrive was Diana who was traveling from Clarence House with her father, the Earl of Spencer, in the grand Glass Coach.  Then, after a brief moment to compose herself and have the dress designers straighten her wedding dress, Diana and her father walked down the nave to the altar.  The Archbishop of Canterbury, assisted by the Dean of St. Paul’s Cathedral, presided over the traditional Church of England wedding service.  In the months leading up to the wedding date, the bridal couple had choose to omit the word “obey” from the vows, this had caused much controversy and also received worldwide media coverage since this was the first time it had been done for a Royal wedding. 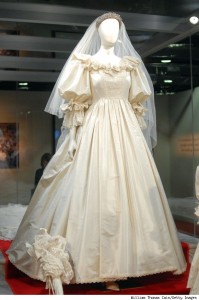 One of the most closely guarded secrets of the royal wedding was Diana’s wedding dress.  Much has been written about the dress which was designed by the David and Elizabeth Emanuel who were relatively unknown at the time.  The famous dress that Diana wore on her wedding day was an ivory silk taffeta gown trimmed with antique lace decorated with 10,000 pearls and sequins, the dress also featured a 25 foot long train.  To complete her wedding attire, Diana wore the beautiful Spencer tiara, the precious family heirloom was considered her “something borrowed”.  The tiara was originally given to Viscountess Althorp, Cynthia Spencer, who was Diana’s paternal grandmother as a wedding gift. (Special Note: Diana’s wedding dress and the Spencer Tiara are displayed at Althorp House, the ancestral seat of the Spencer family in Suffork, during the summer months as part of a special exhibit called “Diana: A Celebration”) 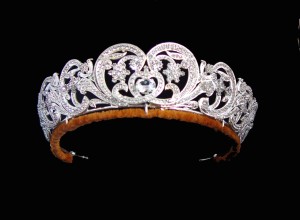 Diana’s bridal bouquet was designed by Longmans Florist; who was the same florist that made the Queen’s bouquet for her wedding in 1947.  Diana’s bouquet was very large cascading style, 42” long and 15” wide.  It was made of fragrant gardenias, stephanotis, freesia, Odontoglossum orchids, lilies of the valley, the Earl of Mountbatten roses, ivy and myrtle.  The Mountbatten roses were used as a tribute to Prince Charles Uncle, Lord Louis Mountbatten, who died tragically in 1979.  The sprig of myrtle was added to the bouquet in keeping with the royal tradition. 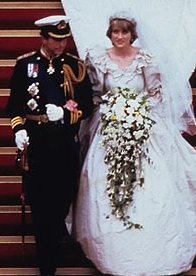 After the conclusion of the wedding ceremony, Prince Charles and Princess Diana traveled to Buckingham Palace from St. Paul’s Cathedral in the State Landau for an intimate wedding breakfast attended by only 120 guests.  Photographs of the couple, the bridal party and the immediate family were taken in the grand Throne Room before Prince Charles and Princess Diana made the traditional appearance on the balcony to greet the massive crowd gathered at the front of Buckingham Palace which cheered wildly as the bridal couple walked onto the balcony and their spontaneously kiss was the first for a British Royal wedding!!

Later in the afternoon of the wedding day, Prince Charles and Princess Diana rode once again in the State Landau traveling from Buckingham Palace to Waterloo Station. Upon arriving at the station, the Royal Train was waiting to take the bridal couple to the Mountbatten home, Broadlands, to start their honeymoon.  (Royal Note: this was also where Prince Charles’ parents spent their wedding night)  Later, Prince Charles and Princess Diana flew to Gibraltar where they boarded the Royal Yacht, Britannia, to embark on an eleven day Mediterranean cruise and then afterwards they went to Balmoral Castle in Scotland.

Sadly, the marriage of Prince Charles and Princess Diana which had started out as a fairytale later turned out to be a very unhappy union.  The couple’s formal separation was officially announced in 1992 and in 1996 the divorce was finalized.  Princess Diana died a year later in 1997 in a car crash in Paris, France.

Date and location:  April 29, 2011 at Westminster Abbey in London 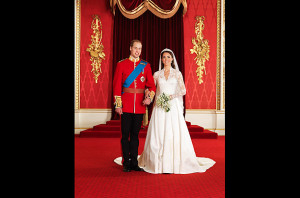 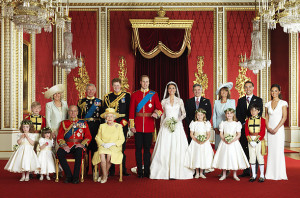 Another more recent British Royal Wedding that also captured the world’s attention is the wedding of Prince William to Catherine Middleton.  Prince William and Kate met at the University of St. Andrews and dated for several years.  The Prince went on to Sandhurst Academy, was commissioned as an officer in the Blues and Royals regiment before transferring to the RAF taking a job as a Search and Rescue helicopter pilot stationed in Angelsey, an island off the coast of Wales.  In October 2010, the Prince proposed to Kate while on a private vacation in Kenya and surprisingly presented her with his mother’s engagement ring.  (Special Note: Prince Harry, the groom’s brother, had inherited the ring after the death of their mother, Diana the Princess of Wales. Several years later when he learned that his brother was to propose to Kate, Prince Harry graciously gave the ring to Prince William)  The engagement was officially announced in November 2010 to the media at St. James Palace.

The wedding was not officially considered a state occasion and for this reason the 1900 people invited to the ceremony were mainly family and friends of the bridal couple but protocol still called for British Commonwealth representatives included as well as members of the diplomatic corps, religious leaders and people from the Prince’s various charities.

On the wedding day, Prince William and his brother, Prince Harry left Clarence House in a Bentley State Limousine to travel to Westminster Abbey. Prince William wore the uniform of an Irish Guard and he wore the Order of the Garter star with his Royal Air Force wings and Queen Elizabeth’s Golden Jubilee Medal attached to a blue riband. Next, the members of the Middleton family and the British Royal family arrived with the Queen and the Duke of Edinburgh arrive just before the bridal party.  Kate and her father left the Goring Hotel in a Phantom VI Rolls Royce to travel to the Abbey, they had been staying there in the days leading up to the wedding.  Kate’s sister, Pippa Middleton was waiting at the bottom of the steps of the Abbey to assist the bride into the Abbey, she caused quite a media sensation with her form fitting dress nearly overshadowing the bride! 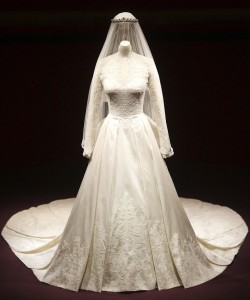 Like Princess Diana almost 30 years earlier, Kate’s wedding dress, had remained a closely guarded secret prior to the wedding day. The dress was designed by Sarah Burton at Alexander McQueen was made of satin that gathered gently at the waist with slightly padded hips that formed a bustle in the back and a 9 foot train.  The stunning dress was instantly compared to that of another royal bride, Princess Grace of Monaco.  (If you are interesting in seeing the wedding dress, please click on the link the Wedding of Grace Kelly and Prince Rainier)

In keeping with the bridal tradition of “something old, new, borrowed and blue, Kate’s bridal attire included the following items:  vintage lace was also incorporated into the dress for “something old” as well as a blue ribbon sewn into the bodice for “something blue”.  The “something new” was a set of earrings especially commissioned by Kate’s parents for her wedding day and the design came from the newly created Middleton family crest.  To complete her bridal attire, Kate wore a veil made of silk tulle which was embroidered with lace and held in place by the Cartier Scroll Tiara, which was the “something borrowed” from the Queen.

On her wedding day, Kate carried a bouquet the florist Shane Connolly created which included such flowers as the lily of the valley, Sweet William, hyacinth, ivy and lastly the tradition sprig of myrtle that is traditionally used in all royal wedding bouquet.  Also in keeping with another Royal tradition, later in the day the wedding bouquet was returned to Westminster Abbey and placed on the Tomb of the Unknown Warrior.  (For more information on this tradition started in 1923 by Lady Elizabeth Bowes-Lyon, Prince William’s beloved  great grandmother, please click on the link to Part Three of the British Royal Wedding Series)

For anyone that watched the wedding television broadcast that was shown in over 180 countries, the interior of Westminster Abbey was beautifully decorated with trees placed along the aisle and at the entrance, six English maples were used in the church and two Hornbeam trees were used at the entrance to create a natural archway.  After the ceremony the trees were taken to Prince Charles’ country estate, Highgrove, and planted as a living memorial to mark the wedding. 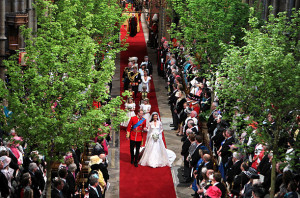 After the conclusion of the wedding service, the Queen hosted a wedding luncheon reception at Buckingham Palace for approximately 600 invited guests.  In addition to the wedding cake and per Prince William’s request a special groom’s cake was created from chocolate bisquits and made according to a Royal Family recipe which was a favorite dessert when the Prince was a child. As another wedding tradition dictated, the bridal couple appeared on the balcony to greet the waiting crowd gathered in front of Buckingham Palace and they surprised everyone with not one but two kisses!!

The new Duke and Duchess of Cambridge left the Palace after the wedding luncheon and travel the short distance to Clarence House to relax and change for the evening reception. (Royal Note: The car that the bridal couple drove in was a blue two seat Aston Martin DB6 Volante convertible which had been a gift from Queen Elizabeth to Prince Charles, the groom’s father, on the occasion of his 21st birthday)  Later, 300 invited quests returned to Buckingham Palace for a special private wedding dinner hosted by the Prince of Wales. The event was followed by dancing and finished with a small firework display on the palace grounds.

The Duke and Duchess left on their honeymoon ten days after the wedding, the destination was a secluded villa on a private island in the Seychelles and the time was limited due to Prince William’s RAF duties.