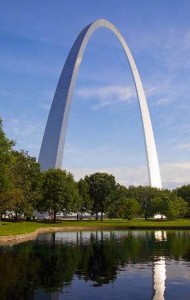 Traveling back and forth from the Midwest to the West Coast on our annual summer road trips, we have passed through St. Louis, MO and we have stopped several times to visit the Jefferson National Expansion Memorial.  The last time we visited, my husband, son and daughter took the tram ride to the top of the Gateway Arch.  (I passed on that experience, too claustrophobic!)  Inside the visitor center is the Museum of Westward Expansion, which showcases the Lewis and Clark Expedition in exhibits and displays.

History of the Gateway Arch

The Gateway Arch is located on the west side of the Mississippi River near downtown St. Louis, MO.  The 630 feet high cantilever arch is the tallest man-made monument in the United States and has become an iconic symbol of the city of St. Louis.

In 1933, a local St. Louis civic leader named Luther Ely Smith had a vision of a great memorial for the city and he sent a proposal to the mayor, Bernard Dickmann.  The idea was to create a permanent memorial to commemorate the great western expansion of the United States, which was inspired by President Thomas Jefferson and later achieved by the Lewis and Clark Expedition.  Eventually, with Smith as the chairman, the Jefferson Expansion Memorial Association was created to raise funds and build the memorial.

Improvement to the riverfront area of St. Louis had been discussed many times over the previous years but with the Great Depression this particular riverfront project would provide 5,000 jobs for the local economy.  Eventually in June of 1934, both the Senate and the House passed bills in support of the project and later President Franklin Roosevelt signed the bills into law and additional funds were acquired to purchase 82-acres on the St. Louis riverfront located on the Missouri side of the Mississippi River.

The lands were acquired over the next several years and demolition of the dilapidated buildings and vacate warehouses along the riverfront began in 1939.  By 1944, the Jefferson Expansion Memorial Committee and the National Park service Director determined that a memorial design competition should be organized.  Finally in 1947, funds were raised and over a hundred applications were received for the competition and the committee narrowed down those entries and selected the five best designs for their review and then from those finalists the committee determined the winning design.  The winner of the memorial design competition was Eero Saarinen & associates which had submitted a very simple and modern design of a large arch to symbolize the gateway to the west with a surrounding landscape of trees and an expansive park area to act as a buffer from the nearby downtown area.

In the following years, problems concerning the railroad soon developed and it took some time to resolve, the railroad tracks needed to be removed and redirected and a tunnel built near the riverfront.  In addition, re-grading of the proposed memorial site was changed from the original layout to improve the view of the memorial from the river.  New zoning regulations were also required near the area of the arch and it was determined initially that 275 feet was the maximum height for the buildings directly opposite the arch. 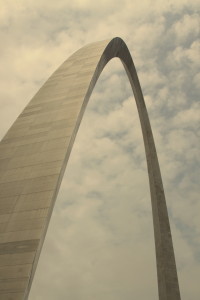 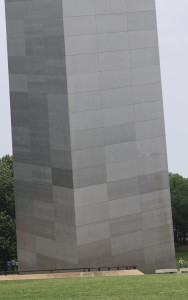 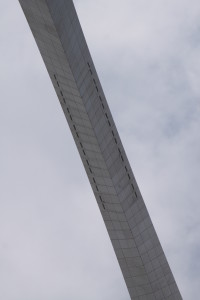 Finally, in 1959 there was a ground breaking ceremony for the memorial and in 1961 the foundation was laid.  Construction on the actual structure of the arch began on February 12, 1963 when the first triangular steel section of the exterior of structure was set in place, 142 equilateral sections measuring from 54 feet at the base and narrowing to 17 feet at the top of the arch.  From the base level to 300 feet, each stainless skin section covers two carbon steel sections with reinforced concrete poured between them.  The arch is hollow in the upper portion to accommodate the tram system that takes visitors to an observation deck which has small windows that provide amazing views of the city of St. Louis on one side and the Mississippi River on the other side. 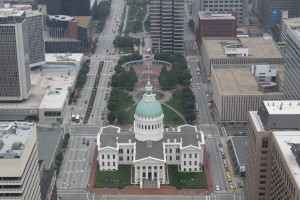 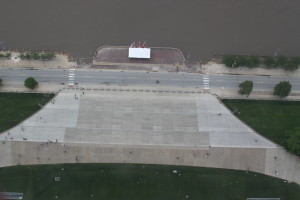 During the building process, in order to keep the opposite sides stable, a temporary truss was placed between them and later removed.  Construction continued and over the next several years there were numerous delays due to safety concerns and lawsuits regarding union issues.  The memorial arch was finally completed and a dedication ceremony was scheduled for October 28, 1965.  Prior to the keystone being set into position there was concern that the legs would not align and meet properly, after several tense minutes and some minor adjustments the two sides were successfully joined together.

The underground visitor center located directly below the arch was opened in June 10, 1967.  Inside the visitor center is the Museum of Westward Expansion, which opened on August 1977, has several hundred exhibits about the Lewis and Clark Expedition and displays about the 19th century United States expansion into the western territories.  Located to the left of the museum entrance are two theaters, one of the screens is four feet tall, that play movies pertaining to the building of the Gateway Arch.  On either side of the large waiting area within the visitor center are two separate entrances that access the north or south tram ride to the top of the arch, the tram ride opened July 22, 1967 shortly after the building of the memorial arch was completed. 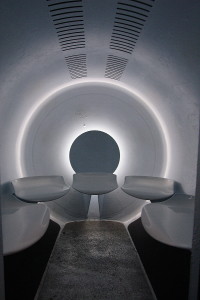 Things to know before visiting the Jefferson National Expansion Memorial

For more information regarding hours, fees, etc for the Jefferson National Expansion Memorial and the Gateway Arch; please see the National Park Service website at www.nps.gov/jeff