Over the past months there have been two posts that discussed the Crown Jewels of England, Part One and Part Two.  Part One detailed the Royal Regalia which is used in the Coronation of the British Monarch and Part Two had information on some of the other items within the Crown Jewels collection, such as Queen Victoria’s small diamond crown and the Queen Mother’s crown with the famous 105 carat Koh-I-Nor diamond.  (yes, the diamond is that large!)   This post will detail some of the items in the Queen’s personal collection; such as the George IV State Diadem, several beautiful tiaras and other pieces of lovely jewelry that have been passed down within the royal family.

By definition the British Monarch’s Jewels are a collection of tiaras, necklaces, earrings and brooches that are part of their personal collection.  Queen Elizabeth II is the current British Monarch and for her coronation in 1953 she wore St. Edward’s Crown and for the annual State Opening of Parliament she wears the Imperial State Crown. (for more information about these two crowns please see Crown Jewels – Part One)  According to tradition, the Crown Jewels never leave England, so when the Queen travels to another country she will wear one of several tiaras from her personal collection.  In addition to a variety of beautiful tiaras, the Queen also has a lovely selection of necklaces, earrings and brooches that she will wear while attending the daily events on her royal calendar.

Listed below are some of the items from the Queen’s personal collection:

The George IV State Diadem was made in 1820 for the coronation of King George IV.   The diadem includes 1333 diamonds, including a four-carat yellow diamond and 169 pearls, the circular frame alternates between crosses and a floral design which incorporate roses, thistles and shamrocks which are the symbols of England, Scotland and Ireland.

The diadem was later worn by Queen Adelaide, the consort of King William IV.  Queen Victoria inherited it in 1837 and she wore it at her coronation during the recessional from Westminster Abbey.  Upon her death in 1901 the diadem was passed to a secession of Queen consorts; Queen Alexandra, Queen Mary and Queen Elizabeth.  The diadem was worn by Queen Elizabeth II for her coronation on the procession from Buckingham Palace to Westminster Abbey and it is now part of the Queen’s Personal Jewel Collection.   The diadem is one of the most easily recognizable items of the collection since it is worn by Queen Elizabeth in the image on the postage stamps, coins and currency of England; it is also worn in the annual procession from Buckingham Palace to the State Opening of Parliament. 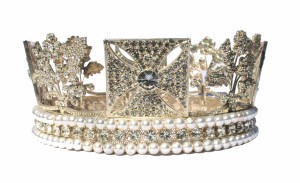 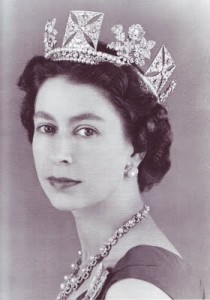 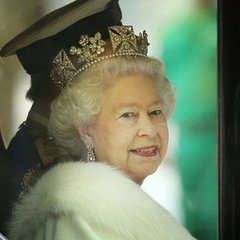 In 1893, this tiara was given to Princess Victoria Mary of Teck on the occasion of her marriage to the Duke of York, the future King George.  Funds were privately raised and it was given by the “girls of Great Britain and Ireland” as a gift to the future Queen Mary. (hence the name of the tiara!)

The tiara is circular in form with diamonds pave set in silver and gold.  Originally the tiara had 14 large oriental pearls at each top; in 1914 Queen Mary adapted the tiara to use 13 large diamonds instead of the pearls for a slight change.  The tiara can also be worn as a necklace.  Queen Elizabeth wears this tiara often and can be is seen wearing it in the images on the paper currency and coins of Great Britain. 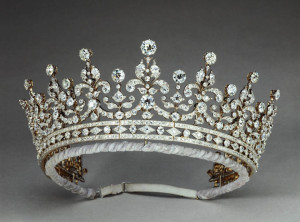 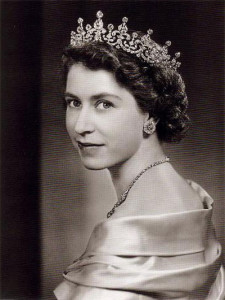 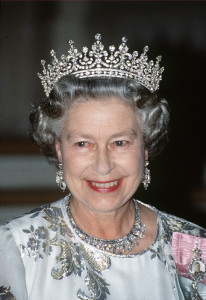 Known by several different names, such as the Hanoverian Fringe Tiara and King Georg III Fringe Tiara, the history of this tiara can be rather confusing.  The piece started as a diamond fringe necklace owned by Queen Adelaide, the consort of King William IV, made with diamonds formerly owned by King George III and Queen Charlotte.  The necklace was inherited by Queen Victoria and passed down within the royal family.  Queen Mary had the fringe necklace remade into a tiara.

Later, Queen Mary decided to combine this fringe tiara with diamonds from a necklace that Queen Victoria gave her as a wedding present.  The royal jeweler, Garrard, was brought in make a new tiara that used elements of these two pieces.  The new tiara now included 47 bars of diamonds with smaller diamond spikes, the new piece can be converted into a necklace.  In 1936, Queen Mary gave the tiara to her daughter-in-law Princess Elizabeth, the Duchess of York (the future Queen Consort of King George VI and later the Queen Mother). 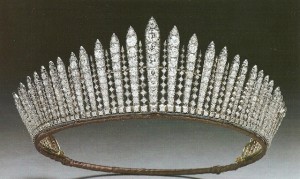 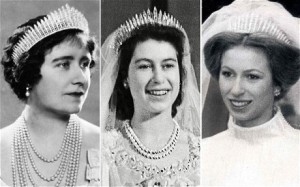 In 1914 Queen Mary commissioned Garrard to recreate the tiara of Princess Augusta of Hesse-Cassel, her maternal grandmother, who was the Duchess of Cambridge.  According to her will, when Queen Mary died she left the tiara to her granddaughter, Queen Elizabeth II.  The tiara was later given to Diana, Princess of Wales, as a wedding present and she who wore often.  After her divorce from Prince Charles in 1996 the tiara was returned to the Queen.

The tiara is French Neo-Classical in a design which features 19 openwork frames of diamonds in the form of arches with 19 graduated large pearl drops.  At the top of each arch are lover’s knot bows with a large diamond at the center. 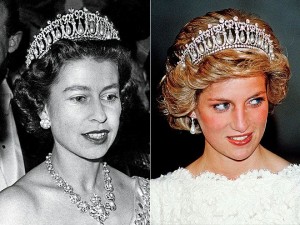 The Grand Duchess Vladimir, Maria Pavlovna, was the wife of the Grand Duke Vladimir Alexanrovich and the aunt of the Tsar Nicholas II of Russia.  The tiara was created specifically for her in 1874 by the Russia royal jewelers and was a semi-circular band made of platinum with a design consisting of fifteen interlaced circles set with diamonds and a band of diamonds across the top with pearls drops and small diamonds mounted inside each of the circles.

With the start of the Russian Revolution in 1917, many Russian royalty members including the Grand Duchess fled the country but most of her fabulous jewels were hidden in a secret vault in the Palace.  Sadly, Tsar Nicholas and his family were murdered by the Bolsheviks in 1918.   The Grand Duchess lived exiled from Russia first in Venice, Italy and later she moved to the south of France.  Her jewels, including the tiara were eventually smuggled of out Russia by a trusted British diplomat and returned to the Grand Duchess.   When she died in 1920 her jewels and the tiara were given to her daughter, the Grand Duchess Elena Vladimirona, who married Prince Nicholas of Greece.  As the family’s vast fortune was reduced, she sold several pieces of jewelry, including the tiara, to Queen Mary in 1921.

By this time the tiara was in very poor condition and in need of repairs.  The tiara was refurbished by Garrard, the royal jewelers, and Queen Mary decided to make the original teardrop pearls interchangeable with her famous Cambridge emeralds.  When Queen Mary died in 1953, the Vladimir Tiara was given to her granddaughter, Queen Elizabeth II.

Queen Elizabeth wears this versatile tiara frequently and it is also one of her favorites, sometimes she will wear it with the original pearl drops, sometimes with the Cambridge emeralds and she has even worn the tiara with no pendants at all. 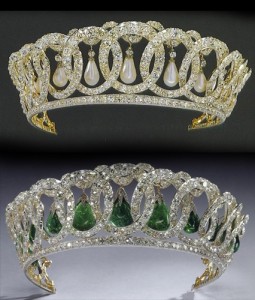 This tiara was made by Cartier in 1939 and purchased by the Duke of York, the future King George VI, for his wife the Duchess of York.  The tiara is designed in the form of a band with 16 graduated scrolls set with 888 diamonds.

As Queen Elizabeth, the consort of King George, she wore the tiara several times over the years before presenting it to her daughter, Princess Elizabeth, for her 18th birthday.  When King George died in 1952 Princess Elizabeth became Queen Elizabeth II and for her 1953 coronation, the tiara was loaned to her sister, Princess Margaret to wear.  The tiara was loaned most recently to Catherine Middleton for her wedding to Prince William in 2011. 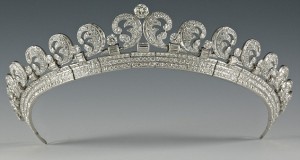 The day before their wedding in 1840, Prince Albert gave Queen Victoria a beautiful sapphire and diamond brooch.  The center stone is a large oblong blue sapphire surrounded by twelve round diamonds and set in gold, the size of the sapphire has never been confirmed but it is estimated to be between 20-30 carats.

After Prince Albert’s death in 1861, the brooch became a very sentimental to Queen Victoria and she wore is very often for during her long life.  When Queen Victoria died in 1901, this important historical brooch was given to the British Crown. Several Queen Consorts have worn the brooch over the years including the present Queen Elizabeth II. 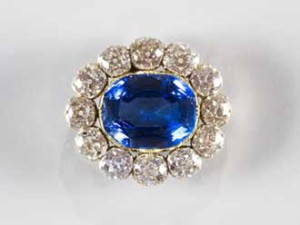 The Cullinan Diamond was found in South Africa and presented to King Edward Vii on the occasion of his birthday in XXXX.  Several stones were cut from this massive diamond, two of those were the pear shaped 94.4 carat Cullinan IIII and the square shaped 63.6 carat Cullinan IV.  Queen Mary had both these stones made into a brooch and they became known collectively as “Granny’s Chips”.  When she died in 1953, the most of her jewelry collection, including the brooch, was passed onto Queen Elizabeth II.

The combined weight of the two stones when worn as a brooch can be very heavy. During her reign the Queen has worn the brooch only for very special occasions, the most recent time was for her Diamond Jubilee celebration in 2013.  The beautiful brooch has great significant historical value and it is considered one of the most priceless items in the Queen’s Personal Jewel Collection. 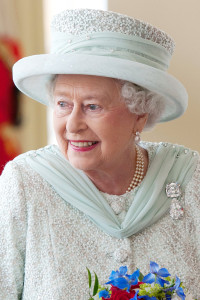 5 thoughts on “The Queen’s Jewelry Collection (Part One)”