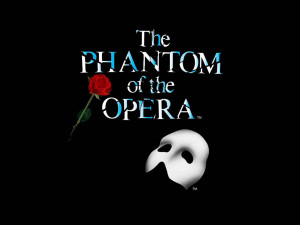 “Le Fantome de Opera”, was originally a French novel written by Gaston Leroux and was first published in serial form in the newspaper Le Gaulois from late 1909 to early 1910.  When the story, “Phantom of the Opera” was publish later in book form but it sold very poorly and over the years there were various films and state productions, the most successful were the 1925 silent film adaptation starring Lon Chaney and the 1986 Andrew Lloyd Webber’s musical.

Andrew Lloyd Webber has created some of the most recognizable Broadway plays from “Evita” to “Cats” to the hugely successful “The Phantom of the Opera”.  He has received numerous awards and honors such as seven Tony Awards, three Grammy Awards, an Academy Award, the Kennedy Center Honors Award and a British knighthood.

Andrew Lloyd Webber was born in London, England on March 22, 1948.  He came from a musical family; his father William was a composer and organist, his mother Jean was a violinist and pianist, his brother Julian was an accomplished cellist.  Lloyd Webber was a musical prodigy and he played piano, violin, the French horn and began writing his own music at the age 6.  He studied at the Royal College of Music to pursue an interest in musical theatre.

In 1965, Lloyd Webber had started his long collaboration with Tim Rice.  Their first musical was “Joseph and the Amazing Technicolor Dreamcoat” and it was an immediate success.  Their next production was the 1971 “Jesus Christ Superstar” followed by the 1976 “Evita”.  By this time, Lloyd Webber and Rice had developed a tradition of composing the words and music first, then recording an album of the music and finally producing the stage play.  Unfortunately, the successful Lloyd Webber and Rice partnership ended by the 1980s.  Lloyd Webber went on to create his first solo production “Cats”, which opened in London in 1981.

Lloyd Webber had been longing to write a romantic musical and he became inspired by the 1909 “Le Fantome de Opera” book written by French author Gaston Leroux.  In collaboration with Charles Hart and with some additional material provided by Richard Stilgoe, Lloyd Webber’s score of “Phantom of the Opera” is operatic in style while maintaining the form of a traditional musical; the songs are interspersed with the play’s dialogue. In 1982, “Phantom of the Opera” premiered in London’s West End at Her Majesty’s Theatre and is the story of a beautiful soprano who becomes the obsessed with a mysterious, disfigured musical genius.  Sarah Brightman was cast as Christine and Michael Crawford played the title role of the Phantom.  For the original West End production, Hal Prince directed and Gillian Lynne provided the musical staging and choreography.  Maria Bjornson was the set designer and she created the intricate sets that included a large chandelier that seemingly crashes to the stage and a gondola that travels through the dark underground world beneath the opera house.  She also created the 200 costumes with the majority of them being the elaborate gowns in the “Masquerade” section of the play.  In 1988, “Phantom of the Opera” came to the Majestic Theater on Broadway in New York City with Crawford and Brightman reprising their roles.  Since that time, “Phantom” has become the longest-running Broadway show in history with over 10,000 performances.

Lloyd Webber’s stage production of “The Phantom of the Opera” has proven to be his most popular musical.  The total worldwide gross receipts are the highest in history at over $5.6 billion and the total Broadway gross In the United States at $845 million.  “Phantom” has been seen by millions of people in almost 150 cities in over 25 countries while the musical still continues to play in both London and New York.

As the play opens there is an auction going on at an old Opera House and theater props are being sold.  Lot #665, a monkey shaped music box, has been bought by an old man named Raoul, the Vicomte de Chagny. He recognizes the music box and looks fondly at it remembering someone who was once very special to him.  The auction proceeds and the next object up for bidding is lot #666, a shattered chandelier that the auctioneer says holds a mystery never fully revealed and a strange connection to a phantom that haunted the old Opera House.  As the chandelier is uncovered it appears to glow and very slowly ascends to its original place high above the theater audience as the orchestra starts to play the overture …

As the scene opens it is several years earlier and Carlotta, the Opera House’s leading soprano, is rehearsing her performance for that evening.  Suddenly the backdrop collapses and the frightened Opera House cast members start to whisper that it is the work of the ghostly Phantom.  Unsettled by the incident, Carlotta refuses to continue with the rehearsal and will not perform under these conditions.  The new owners of the Opera House are ready to cancel the evening’s performance but Madame Giry, the ballet mistress, tells them there is a chorus girl named Christine who has a beautiful voice and she can sing Carlotta’s part.  The owners are enchanted by her voice and decided she will substitute Carlotta for the night’s performance.

Later that evening after her debut, Christine is in her dressing room when Raoul, an old childhood friend, comes backstage to congratulate her on her wonderful performance.  Christine reminds him of the Angel of the Music stories that her late father would tell them when they were children and she reveals that the reason she sings so beautifully is that the Angel has come to visit her in the past and he taught her to sing.  Raoul, who is secretly in love with Christine, tells her the stories her father told could not possibly be true and it is just a fantasy.  As Raoul leaves, the Phantom appears in Christine’s dressing room mirror.  She becomes frightened and demands that he reveal himself.  The Phantom does and he tells her that he believes her story because he is the Angel of the Music.  He convinces Christine to come with him and she follows him to a dark place beneath the Opera House.  As they board a gondola, to calm her fears, the Phantom starts to sing to her as they travel across an underground lake and go deeper into his subterranean world. 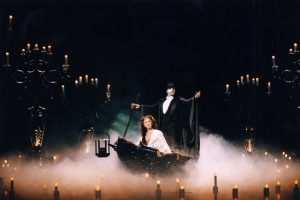 Christine becomes frightened by something and faints. She awakens to the sounds of a strange little monkey music box.  She sees the Phantom composing music at his organ and curious about what is hidden behind the Phantom’s mask she cautiously approaches him and as he is distracted with his music she takes off his mask to find that his face is hideously deformed.  He is shocked by her actions of revealing his face and he shamefully confesses to her how he longs to look normal and wishes she could possibly love him despite the way he looks.

While the Phantom has Christine underground, Madame Giry delivers a note from the Phantom to the Opera House owners demanding that Christine replace Carlotta in his new opera, II Muto, and if they fail to meet his demands something terrible will happen.  Carlotta is very upset about the Phantom’s request and the owners assure her that she will remain the lead soprano.  But during her performance that evening the Phantom causes her to croak like a frog as she tries to continue singing.  As the ballet dancers try to go on with the show, suddenly the body of the stagehand Buquet appears hanging from the rafters and falls to the stage floor dead.  There is panic on stage and the owners plead for everyone to remain calm explaining it is just a horrible accident but a sinister laughter from the Phantom can be heard somewhere in the theater.

A frightened Christine finds Rauol and tells him of her previous encounter with the Phantom in his underground world but he does not believe her and swears to love and protect her from harm.  The Phantom is in the shadows and overhears the conversation and claims he will seek revenge against Raoul.  The scene ends with the Opera House’s large chandelier crashing to the stage and the curtain falls on Act One.

As the scene opens there is a gala masquerade ball being held and the Phantom is in attendance and disguised as the Red Death.  He reveals himself to the guests tells them he has written a new opera, Don Juan Triumphant, and demands that it be produced immediately and that Christine play the lead role.  Once again he warns that unless his demands are met there will be horrible consequences.  Christine is now engaged to Raoul and the Phantom approaches her and grabs her engagement ring and vanishes in a flash of fire and smoke.

The new opera goes into production with Christine as the lead and Raoul has a plan to set a trap to capture the Phantom, knowing the he will be attending the première. Distraught and torn between her love for Raoul and her sympathy for the Phantom, Christine goes to visit her father’s grave and wishes that he were still there to guide her.  The Phantom appears in the cemetery and Christine is once again starts to fall under his spell but Raoul arrives to rescue her.  The Phantom challenges Raoul with his words and Christine pleads with Raoul to leave with her.

On opening night of the new opera, Christine is on stage singing her duet when she realizes that she is singing with Piangi, the lead tenor, but with the Phantom.  The Phantom has strangled Piangi and uses this opportunity to express his love for Christine but she rips off his mask exposing the Phantom and the audience is shocked by his deformed face.  The Phantom grabs Christine and flees the theatre.  Madame Giry tells Raoul where to find them in the Phantom’s underground world.

The Phantom forces Christine to wear a wedding dress and Raoul finds them but the Phantom captures him.  The Phantom tells Christine that he will free Raoul if she agrees to stay with him forever and if she refuses his demand Raoul will die.  Christine comforts the Phantom and having experienced compassion for the first time he agrees to set both of them free.  After they leave the Phantom starts to weep and covers himself with his cape just as an angry mob searching for Christine arrives down in the underground world but the Phantom has vanished and only his mask remains.

1 thought on “The Phantom of the Opera – the Musical”