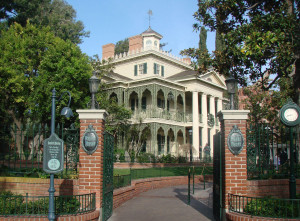 Back in the early 1950s, the original concept of Walt Disney’s Disneyland illustrated by legendary Imagineer Harper Goff was designed with an old manor house and adjoining graveyard on a hill overlooking the main street.  Eventually the attraction was omitted from the plans and not included when Disneyland opened in 1955.

Years later when Disney was planning an expansion of the park to include New Orleans Square located between Frotierland and Adventureland, Disney Imagineer Ken Anderson was assigned the task of creating a story using the original concept of a “haunted manor” and developing it as a walk-through attraction.  For inspiration Anderson traveled to New Orleans to study the architecture and designed an old plantation antebellum style manor in a state of disrepair.  Disney had the plans revised because he thought a neglected looking building should not be located in his clean park.  He famously said, “We will take care of the outside and the ghost can take care of the inside”.

Andersen came back with a new redesigned mansion and a basic story concept about a sea captain who kills his wife in a rage and then hangs himself when he sadly realizes the tragedy that he has caused. Additional Imagineers, Rolly Crump and Yale Gracey, were brought in to further develop the project.  In the Disney tradition of fully researching a project, the Imagineers studied ghost hauntings and old horror movies for inspiration and they experimented with different types of special effects to further expand the basic storyline.  Walt appreciated the ideas and the special effects that they were creating but he did not like the sinister stories that they were developing and the project was once again put on hold for several more years.

Disney announced the new attraction in 1961 even though Walt was still unhappy with the ride’s current concept. Construction on the building began in 1962 and the exterior of the “haunted manor” was completed by 1963.  But the building stayed empty for several years as the Disney Imagineers worked on several other attractions for the New York World’s Fair of 1964-65 and then  the project was further delayed when Walt suddenly died in 1966. 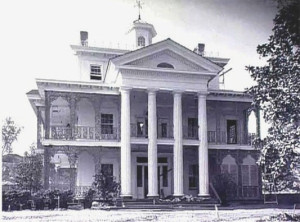 As the project continued a few years later for the newly renamed Haunted Mansion attraction, the concept changed significantly from a walk-through to a vehicle ride attraction using the Omnimover system that was developed for the Monsanto “Adventure Thru Inner Space” ride that Disney created for the New York World’s Fair.  This new ride system would solve the problem of the original low capacity walk-through attraction.  Now these new Omnimover vehices, renamed the Doombuggies, would be able to accommodate a much higher ride capacity using approximately 131 cars with an hourly guest capacity of over 2,400.  These new ride vehicles would also help in the attraction’s storytelling because the Doombuggy could be rotated in any direction at any point in the ride and this would allow the Imagineers to control what the guests not only heard but saw throughout the ride.

Around this time Anderson left the project and several other Disney Imagineers, Marc Davis, Claude Coats and X Atencio, were brought in to develop the attraction’s interior.  Coats was originally a Disney background artist and he wanted the attraction to be a scary adventure with a moody interior designed with endless hallways and a corridor of unusual doors.  Davis was a Disney animator that wanted spooky characters and funny gags throughout the ride.  X Atencio combined these two different concepts of scary and funny into an entertaining ride and he also wrote the lyrics for the ride’s theme song, “Grim Grinning Ghosts”. 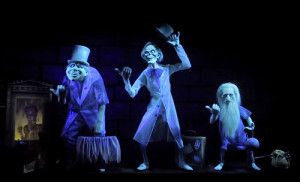 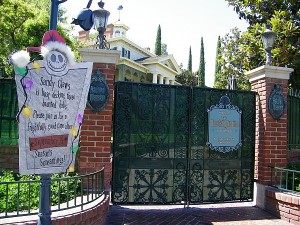 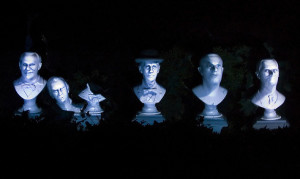