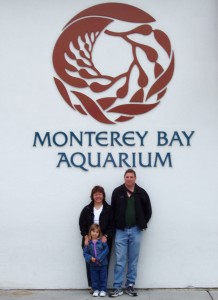 If you and your family are interested in ocean life and sea creatures, the Monterey Bay Aquarium is a wonderful place to visit.  My son and I went shortly after it opened and we’ve been going with our family every couple of years and we enjoy it very much!  My daughter loves anything that has to do with the sea, maybe that’s because her favorite Disney movie and character have been “The Little Mermaid” and Ariel!!

The Monterey Bay Aquarium is located in Monterey, California and was built on the site of the old Hoyden Cannery at the end of Cannery Row.  Sardine canneries have been a part of Monterey’s history from 1916 until the day when the last cannery closed in 1973.  This area of the Pacific Coast was made famous in John Steinbeck’s 1945 novel; “Cannery Row”. The book was inspired by the work of a real life marine biologist named Edward Ricketts and his old laboratory and home is located near the current site of the Monterey Bay Aquarium.  This area on the Pacific Coast has become very popular with tourists and has several shops, restaurants and hotels.

The Monterey Bay Aquarium opened in 1984 and over 1.8 million visitors come annually. It can get very crowded on weekends and I would recommend a mid-week visit if possible, especially if you have small children that are not in school.  Summer is also a busy time of year and if you go in the winter months the crowds will be less.  Plan to spend a couple of hours there because there is a lot see and do. 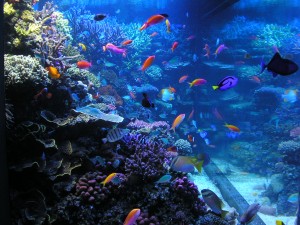 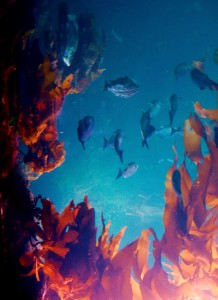 The Aquarium is home to thousands of sea animals with over 623 different species on display.  What makes it different from any other aquarium in the world is that fresh ocean water is circulated through pumps continuously from Monterey Bay.  The Kelp Forest exhibit is a 33,000 gallon tank with 33 foot high windows that are over 7 inches thick.  This is one of the only aquariums in the world that has successfully grown Giant Kelp because the top of the tank is open to the sunlight during the day and equipped with a surge machine to simulate the tides.  This is what the kelp needs to grow at about 4 inches per day.  Another tank in the aquarium is the Open Sea gallery which is 1,200,000 gallons and some of the sea life in this tank includes stingrays, jellyfish, blue fin and yellow fin tuna, and sharks.  In another exhibit are penguins and check for their feeding time because it is a great activity to watch with the children.  The only mammals found in the aquarium are the California sea otters and the highlight of an aquarium visit is watching these cute little creatures!

Check for current hours and prices as well as news and information about the aquarium at www.montereybayaquarium.org. 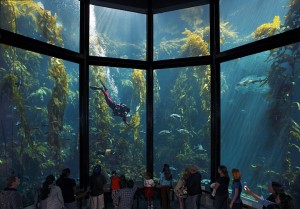