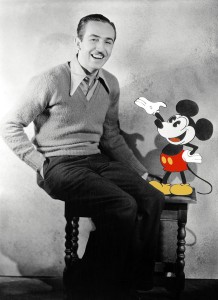 In honor of Mickey Mouse’s birthday (November 18, 1928), in this post I will discuss the history of the most famous of the Disney characters.  At the time that Mickey Mouse was created, Walt Disney’s fledgling company was at a critical low point in its development.  Walt had been in New York trying to negotiate higher fees with Universal Picture the distributor of their animated short films and he ended up losing not only the contract but also the rights to the character of Oswald the Lucky Rabbit.  Walt was devastated about this business setback but Lillian, his always supportive wife, encouraged him to keep trying and not be discouraged.  So, on the long train ride back to California Walt started to sketch ideas for a new mouse character and Lillian suggested the name of Mickey Mouse.  Mickey went on star in a series of successful animated shorts and this would be a turning point for the newly formed Walt Disney Studios.  As a result the company would eventually be able to finance their first full-length animated film, “Snow White and the Seven Dwarfs”.  Let me quote a famous line frequently used by the Disney Studios that sums it up perfectly, “… and it all started with a mouse”. 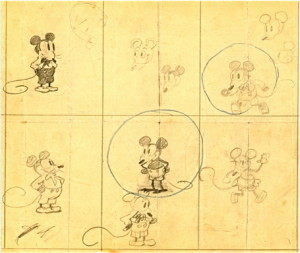 The character of Mickey Mouse was first drawn by animator Ub Iwerks for a silent animated short film called “Plane Crazy” but the Disney Studios had failed to find a distributor.  Meanwhile the always optimistic Disney continued production on three additional animated short films featuring Mickey.  Ultimately, “Steamboat Willie” was the first of those four black and white animated short films to be released and premiered on November 18, 1928 (and for this reason the date is officially used for Mickey Mouse’s birthday).  Not only was it the debut of Mickey Mouse but it was also the first Disney animated film to use synchronized sound.  Eventually, Mickey went on to appear in hundreds of animated films; most notably the 1929 short film “The Barn Dance” which is the first time Mickey speaks, the 1935 short film “The Band Concert” where Mickey appears for the first time in color and the 1940 full length animated film where he appears as the Sorcerer’s Apprentice.  Originally Walt Disney provided the high falsetto voice of Mickey Mouse until 1946, but later Walt returned as the voice of Mickey for the original “Mickey Mouse Club” television series which was shown on ABC from 1955 to 1959. 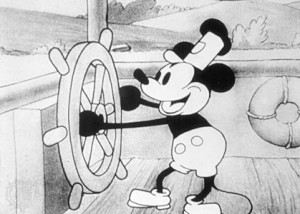 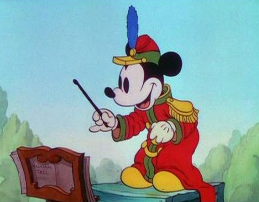 As mentioned previously, Ub Iwerks was the first animator to draw the character of Mickey and he designed the figure simply by using several circles so that it would be easy to animate which was very important given the fact that literally hundreds of drawings are required to make an animated film.  The most noticeable feature of the circular design was Mickey’s head and ears and this would prove to make the character instantly recognizable and eventually lead to the character’s trademark silhouette.

Later, with the approval of Walt, animator Fred Moore redesigned Mickey’s body and also changed his eyes from small black dots to small white eyes with black pupils and Mickey has generally been drawn the same way ever since then.  This new Mickey redesign first appeared in the 1939 “The Pointer” animated short film.  Also, Mickey’s hands originally were drawn with three fingers and a thumb but later in the 1929 “The Opry House” animated film Mickey was drawn wearing white gloves to provide contrast against his black body and this change in design was made permanent.  Typically Mickey always drawn wearing red shorts with two large buttons and large yellow shoes but sometimes, depending on the animated short or full length film theme, Mickey can also be drawn wearing a different costume, such as the sorcerer’s robe in the 1940 “Fantasia” animated film or the 1983 “Mickey’s Christmas Carol” where he wears Victorian-style clothing for the character of Bob Cratchit in an animated film adaption of the Charles Dickens classic “A Christmas Carol”. 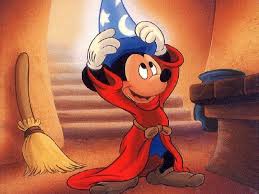 After the release of Fantasia, Mickey appeared in fewer Disney studio films and his popularity started to decline with the emergence of other Disney characters.  Then, in 1955 Mickey was featured in the Disney television series, “The Mickey Mouse Club”, and Walt took the opportunity to re-release several of the Mickey Mouse animated shorts which allowed an entirely new generation of kids fell in love with the mouse!!  (The idea of re-releasing “old” Disney films every decade has proven to be a very lucrative marketing tool for the Disney Studios because the initial cost was usually covered by the initial release and anything after that is usually pure profit.  Another example of this idea was the re-release of Disney films on VHS and then later DVD) 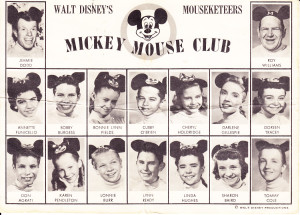 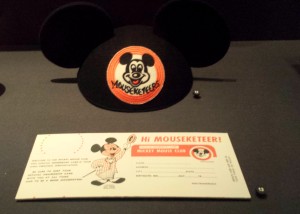 Throughout the following years Mickey also appeared in several new Disney animated films, the 1983 “Mickey’s Christmas Carol” and the 1990 “The Prince and the Pauper”.  One notable Mickey appearance was in the 1988 “Who Framed Roger Rabbit” directed by Robert Zemeckis and this Disney/Amblin film uniquely featured animated characters appearing with live-action characters.  (This concept of mixed media was not new to Disney and in the 1920s Laugh-O-Grams had made a series of “Alice” animated cartoons featuring a live-action Alice having adventures in an animated world)  What makes “Roger Rabbit” interesting is that, in additional to numerous animated Disney characters, the film also includes several Warner Bros. animated characters.  Warner Bros. had long been a direct competitor in animated films to the Disney Studios and an agreement was reached that in the scene in which Mickey Mouse and Bugs Bunny appear together that each of them would have the same amount of screen time including the exact number of frames used for each character in the final cut. 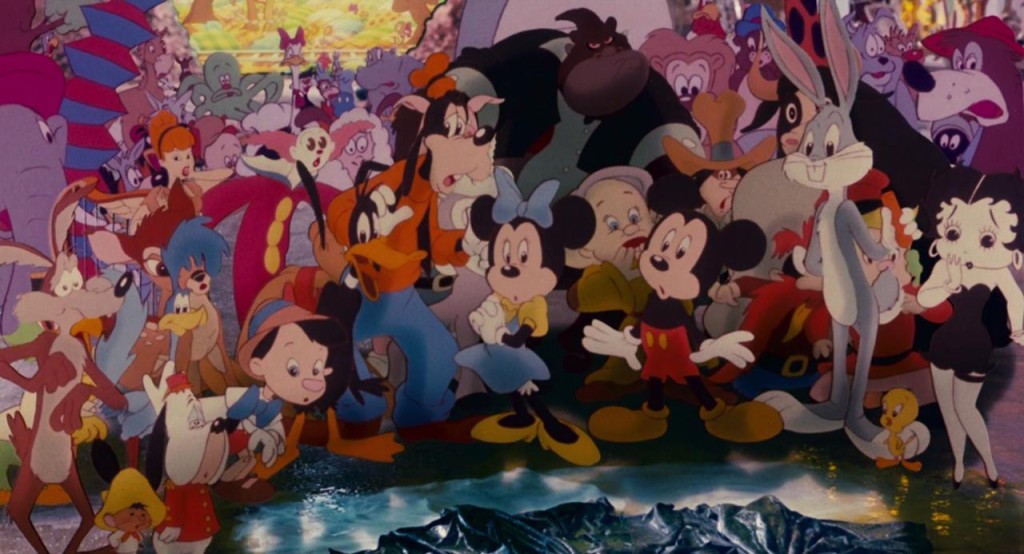 After the loss of the Oswald character in the late 1920s, Walt learned any important business lesson and that was to keep control of the rights of his animated characters.  This control included the marketing and merchandising of all the Disney characters starting with Mickey Mouse in 1928.  After the success of “Steamboat Willie”, Mickey became very popular and Walt wanted to take advantage of the situation by developing a line of Mickey merchandise.  In 1933 the first Mickey Mouse watch was manufactured by the Ingersoll Watch Company and sold for $3.75.  The watch featured an image of Mickey with his hands used to mark the hour and minutes.  Throughout the years hundreds of different kinds of merchandise items were also produced and sold with the image of Mickey Mouse, such as plush toys, figurines, games and other toys.  (The Disney marketing of their animated character images on a large variety of merchandise items proved to be very lucrative and they contracted several outside manufactures and companies to distribute these items, such as the Milton Bradley and Fisher-Price companies.  Later a separate division within the company was eventually created specifically for merchandise sales that were exclusively sold in the Disney theme parks, then Disney retail stores and their website, disney.com)  Please click on the link to see my Disney Memorabilia Collection. 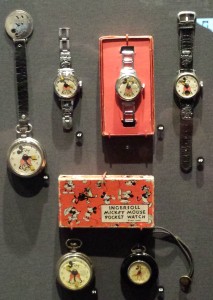 Mickey Mouse also appeared in other forms of Disney-related print media.  After the appearance of Mickey in the popular animated shorts of the late 1920s and 1930s, Walt entered into an agreement with the King Features Syndicate and a comic strip featuring Mickey and friends was created and first one appeared on January 13, 1930.   So, throughout the following years the character of Mickey Mouse would be featured in other comic strips, later several comic book series and children books. 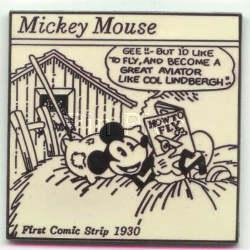 After Walt built Disneyland in 1955, Mickey Mouse became the mascot for all the Disney theme parks.  His image appears in advertisement for the parks and, as previously mentioned, all types of Mickey merchandise is sold within the parks.  Of course, one of the most exciting things for children (adults, too!) when visiting one the parks is seeing Mickey Mouse and long lines of guests form to have their photos taken with him.  (Travel Note: In Disneyland park guests can step into Mickey’s House in ToonTown which opened in 1993.  Guests will feel like they stepped into one of Disney’s animated cartoons as they walk through the house to meet Mickey who sometimes appears as Steamboat Willie or the Sorcerer’s Apprentice) 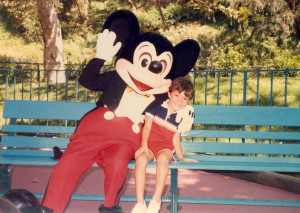 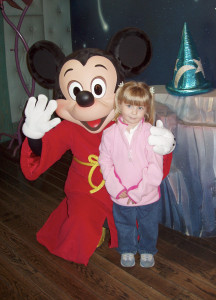 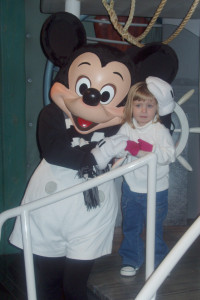 (Special Note: “Hidden Mickeys” can be found throughout the Disney theme parks.  They are generally the combination of the three circles representing the head and ears of Mickey Mouse.  On a personal note, looking for the “Hidden Mickeys” in Disneyland is one of our favorite things to do when we visit the park and it can be a lot of fun!  There are entire websites and books dedicated to identifying these “Hidden Mickeys”, so check it out and next time you are in Disneyland or one of the other Disney theme parks and you can make a game of finding them!)

Over the years, Mickey Mouse has received ten Academy Award nominations for Best Animated Short film and has won only one for the 1941 “Lend a Paw”.  In 1932 Walt Disney received an honorary Academy Award for his creation of Mickey Mouse and its contribution to the Hollywood movie industry.  In 1978, to honor Mickey Mouse’s 50th birthday, he received a star on the famous Hollywood Walk of Fame making him the first cartoon character to receive this distinctive honor.  Mickey’s star is located near the El Capitan Theater on Hollywood Blvd which is now owned by the Disney Company.  Walt Disney’s star is also located nearby.   In 2005 Mickey was the Grand Marshal of the Tournament of Roses Parade and once again he was the first cartoon character to receive the honor and only the second fictional character after Kermit the Frog in 1996.  Walt Disney had previously been Grand Marshal of the Rose Parade in 1966. 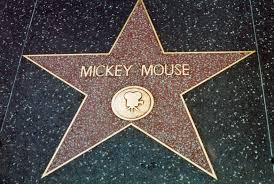 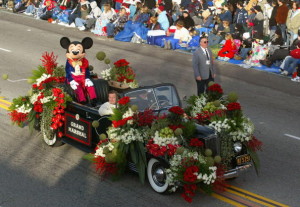 Special Blog Note:  Finally, as many of readers of this blog know from previous posts, I grew up in Southern California.  My family loved Disney and we made annual visits to Disneyland and always went to the movie theaters to see the latest Disney animated films.  Throughout the years I became fascinated by Walt Disney who was the creative genius behind those wonderful animated films, television programs and Disneyland.  One of my favorite books about Walt is the Bob Thomas book, “Walt Disney: An American Original”.  The book covers the life of Walt from his birth in Chicago, IL to his early childhood in Marceline, MO and then follows him to Kansas City as he starts the Laugh-O-Gram Company and then finally to California as he created the Walt Disney Company and later built Disneyland.  (I highly recommend the book!)   Recently, after we had moved to the Midwest, I finally got a chance to visit Walt’s boyhood home in Marceline, MO and later on a road trip back to California we took a side trip to see the Walt Disney Family Museum located in the historic Presidio in San Francisco, CA.  (For more information and travel reports about those two destinations, please click on the links.  Also, for more detailed information about the Disneyland Park in Anaheim CA, please check out the five part series on this blog by clicking on the link)