Having visited the Library of Congress on a trip to Washington in 2002, I became fascinated with the beauty of the art and architecture of the Jefferson Building.  There are so many details in the building and everything seems to have special meanings and symbolism designed to show America’s love of learning, science and culture.  The Library of Congress has been featured in several books; two books that I especially enjoyed were “The Collectors” by David Baldacci and “Murder at the Library of Congress by Margaret Truman.  In fact, the Reading Room is shown on the cover of “The Collectors” and that is the area of the Jefferson Building that will be the topic of this post.

The Reading Room is the highlight of the one-hour guided tour of the Library of Congress and can be seen from the Visitor’s Gallery.  The Library of Congress is open to the public for academic research and for access to the Reading Room with a portion of the Library’s vast collection visitors are required to apply for a Reader Identification Card which is issued in the nearby Madison building.  To apply for a Reader ID Card the person must be at least 16 years old, a United States Citizen and a government issued photo ID, such as a driver’s license, state ID card or passport, is required for valid identification purposes.  For more information about the Reader ID Card, please see the Library of Congress website at www.loc.gov/visit/tours 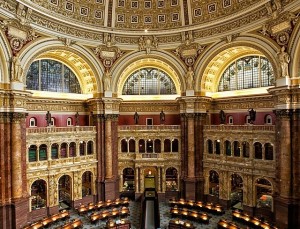 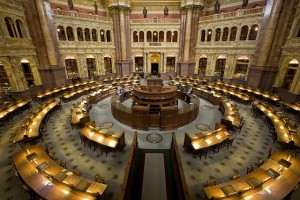 The Reading Room is a large octagonal room located in the center of the Jefferson Building.  Upon entering the room, look up at the impressive dome ceiling which towers 125 feet from the main floor of the Reading Room.  The coffered dome is made of stucco which is attached to an iron and steel frame and is designed by sculptor Albert Weinert.  The dome decreases in size toward the opening at the center of the dome making the dome appear larger.  At the top is a circular area with a painting by Howland Blashfield that depicts the Evolution of Civilization and shows twelve large figures that represent the various countries around the world that have made important contributions to civilization.  An additional area of 35 feet rises to form the lantern area of the dome with eight windows and then another smaller shallow dome that covers the lantern area with an additional painting by Blashfield.  A separate exterior dome is built over the entire interior dome to protect it from being damaged. 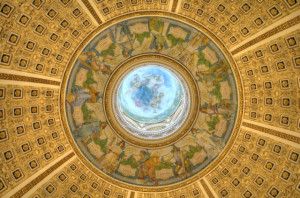 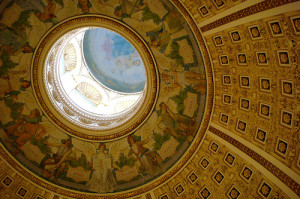 Now, take a look around the large Reading Room.  At the edges of the room where several sets of columns form eight piers that support a series of arches that enclose the entire room.  The piers are set forward into the room by 10 feet creating a series of two-story alcoves that are behind large Italian marble screens.  Standing on top of the piers are eight almost 11 foot tall ivory white plaster statues that symbolically represent the important subjects needed to create and live a civilized life: religion, history, art, poetry, philosophy, law, science and commerce.  On the frieze below the statues each title is inscribed in gilded letters and each statue is shown holding the appropriate symbols and objects that pertain to the different subjects. 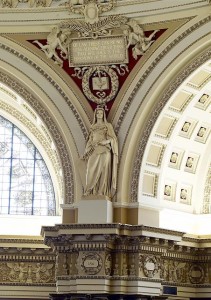 Above the Reading Room alcoves and positioned along the balustrade are a series of sixteen bronze statues of men that have contributed important thoughts or actions that have effected civilization.  The statues are arranged in pairs that flank the piers dividing the alcoves and correspond with the eight important subjects on top the piers, such as Moses and Saint Paul for their contributions to religion, Herodotus and Gibbon for history, Michelangelo and Beethoven for art, Homer and Shakespeare for poetry, Plato and Lord Bacon for philosophy, Solon and Chancellor Kent for law, Newton and Joseph Henry for science and finally Columbus and Robert Fulton for commerce. 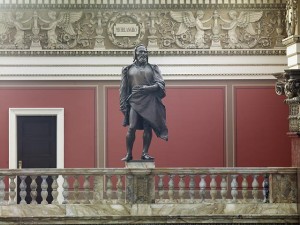 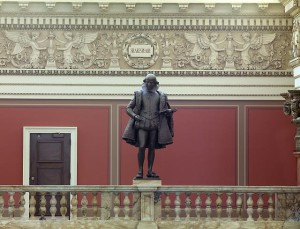 Also positioned between the piers are a series of eight semicircular stained-glass windows which measures 32 feet across at their base.  In the center of each window is the Great Seal of the United States and displayed following the curve of the window are to the right and the left are the seals of individual states and territories.  In between each seal is a torch and the top curve of the windows are surrounded by a border of laurel and rosettes.  In each window there are three seals on each side of the United States Seal; making six seals per window and multiplied by eight windows for a total of 48 seals.  The seals are listed in chronological order from the dates that they were added to the union.  At the time the three territories of New Mexico (1912), Arizona (1912) and Oklahoma (1907) were not officially states until the noted dates and Alaska (1959) did not become a state until much later.

Finally, while standing in the Reading Room, look above the entrance passageway for a glimpse of the most ornate decorations in the Jefferson Building which is the John Flanagan clock.  This large bronze sculpture is a life-size version of Father Time who is carrying a scythe in one hand and on either side of him are maidens with children figurines that represent the four seasons of a year.  In keeping with the entire sculpture theme of measuring the passage of time, there is a four foot in diameter clock with a gilded sunburst and clock hands that are decorated with semiprecious stones. 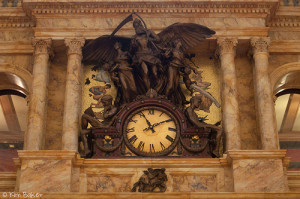 As you can see from the description and pictures of the art and architecture of the Reading Room, and for that matter the entire Jefferson Building, immense thought went into the decorations of the Library of Congress to convey important themes that were needed to make our country, the United States of America, a strong and prosperous nation.