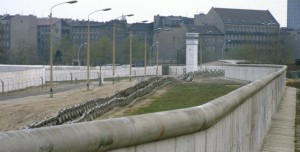 Hi, it’s Jeff again this time writing about the Berlin Wall which was a site I saw frequently while I lived in Berlin during the late 70’s and early 80’s.  So, for this post I will write about the history of the Wall and my personal experiences living in Germany when the wall was still a dominate feature in the city of Berlin.

A Brief History of the Berlin Wall

As World War II was coming to a close, the allies met at Yalta and Potsdam to decide on how to deal with Germany after the war.  The result of these political discussions was the division of Germany into four sectors.  In addition Berlin, the capital of Germany, was also divided into four sections.  With the escalation of the cold war and the lowering of the “Iron Curtain” starting in the 1940’s the east was effectively separated from the west, but Berlin was about 100 miles inside the eastern block.

People in the eastern block countries were generally not allowed to travel or immigrate to to the west, but there were no restrictions for people moving between East Germany and the western sections of Berlin so somewhere between 2.5 and 3.5 million people escaped the east between 1945 and 1961.  Most of these individuals were skilled professionals and educated youth which risked destabilizing East Germany.  Finally in on August 13th, 1961 Stacheldrahtsontag (barbed wire Sunday) happened.  The East German military closed off West Berlin with about 114 miles of barbed wire.  The Wall was built in stages and, as described in Wikipedia, this is how the Wall looked when I lived in Berlin:

The “fourth-generation wall”, known officially as “Stützwandelement UL 12.11” (retaining wall element UL 12.11), was the final and most sophisticated version of the Wall. Begun in the year 1975 and completed about 1980, it was constructed from 45,000 separate sections of reinforced concrete, each 3.6 metres (12 ft) high and 1.2 metres (3.9 ft) wide, and cost DDM16,155,000 or about US$3,638,000. The concrete provisions added to this version of the Wall were done so as to prevent escapees from driving their cars through the barricades. At strategic points, the Wall was constructed to a somewhat weaker standard, so that East German and Soviet armored vehicles could easily break through in the event of war.

The top of the wall was lined with a smooth pipe, intended to make it more difficult to scale. The wall was reinforced by mesh fencing, signal fencing, anti-vehicle trenches, barbed wire, dogs on long lines, “beds of nails” under balconies hanging over the “death strip”, over 116 watchtowers and 20 bunkers. This version of the Wall is the one most commonly seen in photographs. 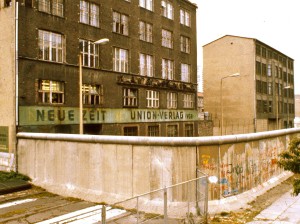 The closure of the border split started at midnight without warning.  It split families a couple of ways.  The most obvious way that it effected the families that lived on the different sides of the border and because of the Wall they couldn’t get to each other. Less obvious were the people who were temporarily on the other side of the border. People who worked on one side, but lived on the other were cut off from their jobs and families!  There were no exceptions and if you were on the wrong side you were stuck.  After the wall was built, many people still tried to escape the east.  The estimates of the number of people killed at the wall range from 136 to over 500. 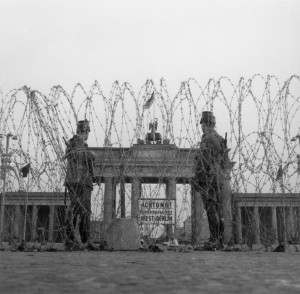 There were only a few crossing points where people could use to go between West Berlin and East Berlin.  As an American associated with the armed forces I was only able to use Checkpoints Alpha and Bravo (between West Germany and Berlin) and the famous Checkpoint Charlie to go to East Berlin.  Later after I was no longer associated with the military I would use the standard Friedrichstrasse entrance which was accessible by the subway system.

The demise of the East German state and the Wall started in 1985 when Mikhail Gorbachev came into power in the Soviet Union.  His glastnost policy led to the weakening of the Soviet Union’s absolute control over its satellite states. Several states such as Latvia and Lithuania declared their independence.  Hungary opened its borders to Austria and the mass exodus began.  Anti-government demonstrations in East Germany led to the resignation of the Politburo.  Gunter Schabowski took control of the country and the military prepared for action.  Fortunately Gunter chose a different path and on November 9th, 1989 he announced that the Wall would be opened “for private trips abroad”.  Masses of people flooded the wall and began to us hammers and chisels to knock out pieces.    By July of 1990 free elections had been held in East Germany and the country was reunited. 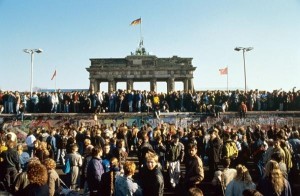 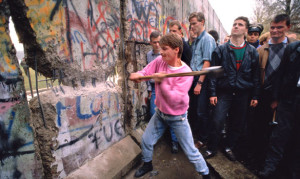 You can find a more interesting and I feel slightly more realistic description of the history of the wall in Fredrick Taylor’s “The Berlin Wall:  A Secret History”. 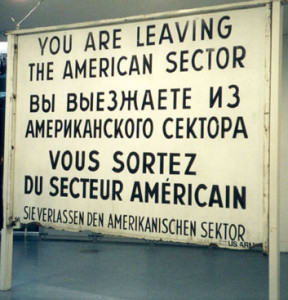 The Berlin Wall is very personal to me.  While living in Berlin it was always a strong presence in the city and I also lived extremely close a section of the Wall and I would often walk along it.  The East German side was barren, raked so the guards could see if anyone crossed.  The western side was generally overgrown. You could see the guards in their towers and the fortifications on the other side. 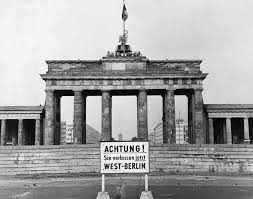 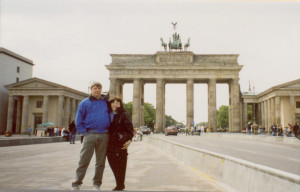 Going back in 1999 for my high school reunion was very strange in many ways.  When I lived in Berlin, the Wall was always there, ever present, even if unseen. Generally you didn’t think much about it, but in the back of your mind you always knew you could only travel so far within the boundaries of West Berlin.  I remember looking at the Brandenburg Gate, it was completely closed off for anyone, east or west and when I got back there there were two things I had to do.  The first was have a currywurst, one of the best sausages in the world and one I can’t get in the US.  The second was to walk through the Brandenburg gate. Until then I couldn’t really come to terms with the fact that the wall was really gone.  It was surreal moment…

It was also strange to me that it was so really, really gone.  I understand why it needed to be demolished, but it is so completely gone with no evidence that it had really existed and it was hard to imagine that it was ever really there and had such an impact on the people living in Berlin.  I understand there is a small section that is still up as a remembrance, but I did not see it during my trip back there. 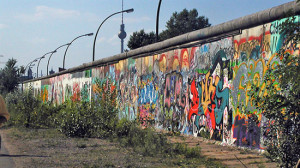 I remember the day the wall came down.  When they cut through that first section. Honestly, I never thought it would ever happen.  My dad was in Germany right around the time the wall came down and he brought us a small piece of the wall.  it is brightly painted.  I have trouble with that as well.  My memories are more black and grey.  Color, even though I have seen it in pictures and on TV just don’t go with the the wall – at least not in my mind.

I strongly recommend going to Berlin if you are ever in the area.  There is so much to see and so much history.  Maybe one day Barbara will write (or have me write) one of her travel posts on the area!