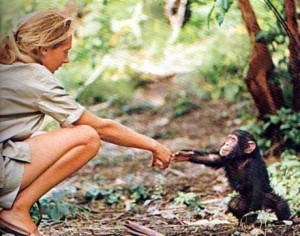 This post today is in honor of the world famous primatologist Jane Goodall who was born on this day – April 3, 1934.  When I was a child I remember watching the 1963 National Geographic documentary about Goodall and the wild chimpanzees of Gombe, Tanzania.  I enjoyed the story of this young woman who bravely travels from her home in England to conduct an interesting research project involving the social behaviors and family interactions of the chimpanzees.  Over the years I have read many books regarding her research in Gombe, such as “My Life with the Chimpanzees” by Jane Goodall, and I also read her interesting biography, “Jane Goodall – the Woman Who Redefined Man” by Dale Peterson. 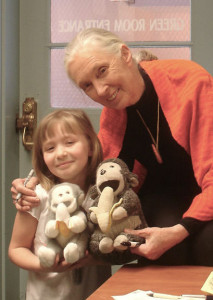 When I was watching the documentary and reading the books all those years ago I never realize that I would have the opportunity to actually meet Jane Goodall.  In March 2008 I saw a notice in our local newspaper about her upcoming appearance at Purdue University and we decided to attend the event. When she walked onto the stage to begin her presentation I thought to myself, this is the woman I have admired since I was a child and here I was sitting in the audience alongside my husband and daughter listening to her tell her wonderful stories about her life living among the chimpanzees.  After her presentation we were so excited to be able to go backstage to meet her, she was so kind to my daughter and even took a picture with her.  It was definitely a day our family will remember for a long time!

Valerie Jane Morris-Goodall was born in London, England.  Her parents were Mortimer, a local businessman and Margaret Joseph, a novelist and she has one sister, Judith.  Her lifelong interest in animals began when she was a child and received a chimpanzee toy as a present from her mother which lead her to reading “The Story of Doctor Dolittle” and the “Tarzan of the Apes”.  Then, years later on a trip to Kenya in 1957 to visit a friend, Goodall was to meet a man who would change her life.  Louis Leakey, an archaeologist and paleontologist, was studying the great apes and he believed that their behavior was an indication of how early man had developed.  Goodall took a job as his secretary and the two developed a good working relationship.  Then, in anticipation for a proposed wildlife project, Leakey sent Goodall back to England to get her personal affairs in order as preparation for a study that would involve extensive research in a remote area of Africa for a period of several months or possibly years. 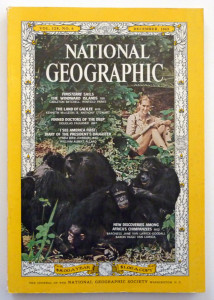 In July 1960, Goodall returned to Africa, with her mother as chaperon, and they went to the Gombe Stream National Park in Tanzania.  Without any formal education, Goodall began her observations of a group of chimpanzees and their social behaviors and family interactions.  (Later Goodall was able to study for a PH. D degree in Ethology from Cambridge University. She completed her thesis, “Behavior of Free-Ranging Chimpanzee” in 1965, writing about the first five years of her study of the animals at the Gombe Reserve)  Unlike any previous scientific research Goodall took an unconventional approach during her field observations and she named the chimps instead of giving them numbers.  In the past, numbers had been assigned to animals to keep a neutral perspective and avoid an emotional attachment toward the animals being observed.  Gradually her presence in the field was tolerated and accepted by the chimps and she was soon able to identify the various chimps determined by their distinct personalities.  Goodall also noted the special bonds between the chimps and she documented how they showed numerous signs of emotions such as joy and sorrow, feelings that were previously thought to exist only in humans.

Goodall’s groundbreaking research went on to prove other animal characteristics previously undocumented.  The first remarkable behavior was that the chimpanzees were capable of using tools.  This skill was previously thought to be a unique characteristic that only humans had and originally this is how we distinguished ourselves from the animal kingdom and how humans were defined by their intelligence.  Through Goodall’s field research she was able to observe and document a chimp feeding at a termite mound and using a stalk of grass as a tool.  The chimp repeatedly inserted the grass stalk into the hole of the mound effectively removing the termites.  Goodall also observed other chimps taking twigs from the trees, stripping off the leaves and using them to extract the termites from the mound.  This modification of an object was a definitive sign of a primitive form of making tools.  In response to these remarkable findings, Leakey called for the science community to redefine the definition of human.

Goodall’s field research also proved that chimpanzees, which previously were thought to have a strictly vegetarian diet, occasionally supplemented their food supply with meat.  At Gombe, Goodall observed that the chimps displayed an aggressive behavior toward the colobus monkeys which also lived in the area.  The chimps would work in groups isolating a single monkey, blocking their escape, and then they would capture, kill and eat the monkey.  This behavior was a major scientific discovery and determined that chimps can be carnivorous animals that showed aggressive behavior.

After spending several years of observing the chimpanzee’s relatively peaceful and ordered existence at Gombe, Goodall witnessed a very disturbing behavior of a group of dominant females that deliberately killed the young chimp of a weaker female of the group.  These unprovoked acts of aggression and random violence continued periodically over the years but it is hard to determine if these attacks were a means of maintaining dominance toward the vulnerable female chimps of the group or if the killings were provoked by jealous emotions.

In 1977, after Goodall’s initial time contracted by Leakey was over, she established the Jane Goodall Institute which has gone on to support further chimpanzee research in Gombe.  Goodall herself has become an important global leader in the effort to protect chimpanzees and their habitats.  Then in 1991, the Roots and Shoots program started as a simple meeting between Goodall and local teenagers in Tanzania.  The group discussed concerns and ways for children to become more involved and experience animals and nature while also protecting and preserving their wild environment.  Since that first meeting the Roots and Shoots organization has grown into 10,000 groups in over 100 countries.

On a personal note, in 1964 Goodall married Baron Hugo van Lawick, a Dutch nobleman and wildlife photographer that worked with her in Gombe.  The couple had one son, Hugo, born in 1967 but then they divorced in 1974.  Within a year, Goodall married Derek Bryceson, who was a member of the Tanzania parliament and director of their national parks.  In his service to the country, Bryceson was able to implement an embargo on tourism at Gombe and thereby protecting Goodall’s research of the chimpanzees.  He died of cancer in 1980.  Since that time, Goodall has gone on to become a successful public speaker traveling around the world giving presentations about her experiences in Gombe including her chimpanzee observations and research as well as the importance of saving wildlife and the environment. 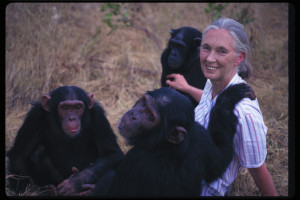