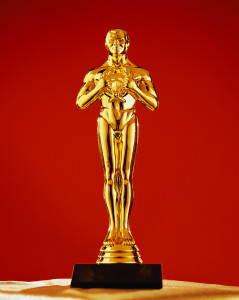 On March 2, 2014, the 86th Academy Awards will be held at the Dolby Theatre in Los Angeles, California.  This annual ceremony honors the outstanding achievements in the film industry and the top awards include Best Picture, Best Director, Best Actor and Best Actress.  It is one of the most exciting nights in Hollywood and it seems like everyone is watching the show to see if their favorite movie, actor or actress wins the coveted Oscar but most importantly everyone loves to see what the stars are wearing on the famous red carpet!

In 1927, the Academy of Motion Picture Arts and Sciences (AMPAS) was established by Louis B. Mayer along with Douglas Fairbanks, Sid Grauman, Mary Pickford and Joseph Schenck.  At the time, Mayer owned Louis B. Mayer Pictures which would later become part of one of Hollywood’s major studios, Metro-Goldwyn-Mayer (MGM).  The idea behind the creation of the Academy Awards ceremony was to unite the five creative services of the film industry (actors, directors, producers, writers and technicians) by gathering them together and acknowledging the best achievements for the year in those different categories.

The first Academy Awards ceremony took place on May 16, 1929 during a private AMPAS dinner held at the Hollywood Roosevelt Hotel in Los Angeles, CA.  The dinner was attended by 270 people and during the brief ceremony the awards were given for outstanding achievements for the films of 1927 and 1928 in twelve categories.  Douglas Fairbanks, the president of the AMPAS, announced the following winners: “Wings” for Best Picture, Emil Jannings for Best Actor and Janet Gaynor for Best Actress.  Two special awards were also given that evening to Charlie Chaplin who was nominated for multiple awards including Best Actor, Best Writer and Best Director for “The Circus”.  The other special award was given to Warner Brothers Studios for their major contribution to the film industry of the first talking picture, “The Jazz Singer”. 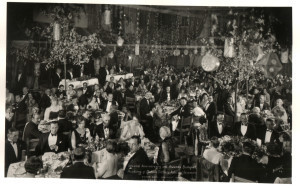 There have been many changes to the Academy Awards selection process over the years.  For the first four Academy Awards the winners received acknowledgement for all their work done during the specified time period but since 1933 the nominees were selected for their work in only a single film.  Another change concerned the way the winners were announcement to the press and public.  For the first Academy Awards, the winners were notified three months prior to the ceremony, so there was very little surprise to the event.  Then, during the next 10 years the winners names were withheld from the press until 11 PM the night of the ceremony.  In 1941, when the names of the winners were leaked by the Los Angeles Times, the process changed yet again and the winners names for each category were sealed in envelopes and not revealed until the actual ceremony which added to the anticipation and the drama of the event.  Still another change to the Academy Awards was the eligibility period, for the first six ceremonies the time period spanned two consecutive calendar years and then starting in 1935 the time period changed to January 1 to December 31 of a single year with the winners being announced at the ceremony held a few months later.

The Academy of Motion Picture Arts and Sciences currently has a membership of over 6,000.  The membership is divided into several different branches representing all the professions involved in film production.  Members from each branch vote to determine the nominees in their categories, such as actors nominate actors, etc.  All members are eligible to choose the best picture nominees.  Once the final nominations are made all the voting members vote for the winners in their specific categories.  The animated short film, live action short film, documentary feature, documentary short and foreign-language film are voted by all members attending special screenings.

The road to the Academy Awards starts with the nomination process.  The nomination ballots are mailed to members in December and must be returned by the specified date, usually two weeks later.  The ballots are returned directly to PricewterhouseCoopers which is the accounting firm in charge of tabulating the votes. Then the final nominees are announced in January and the voting process starts over again.  Once the final ballots are return to the accounting firm they are counted to determine the winners in each of the categories.  The results are kept secret and only two of the partners of PricewaterhouseCoopers know the winner until the sealed envelopes are opened during the Academy Awards ceremony.

The first Academy Awards dinner was a private event so the press and the public did not have access to the ceremony but it received such interest that a local Los Angeles radio station decided to broadcast a live one hour show that continued annually for several years.  The ceremony continued as a dinner event until 1942 when the meal was completely omitted and the event was moved to a more formal setting in a theater.  Then in 1953, the Academy Awards was televised allowing millions to see the ceremony for the first time.  In 1966 the ceremony began to broadcast in color and in 1969 the show started broadcasting internationally and currently is seen in over 200 countries.  In 1999, the day of the week that the ceremony was held changed from Monday to Sunday nights as a way to make the broadcast available for even more viewers.  For more than 60 years the Academy Awards have been held in late March or early April usually six weeks after the announcement of the nominees.  Then in 2004, the decision was made to move the ceremony to an earlier time in the year to late February or early March as a way to shorten the intense and competitive lobbying and ad campaigns by the film studios during the time before the actual ceremony. 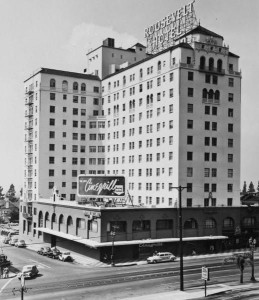 The venue where the Academy Awards ceremony has taken place has also changed numerous times over the years.  As mentioned previously the first ceremony took place at the Hollywood Roosevelt Hotel in 1929.  After that first year the venue alternated between the Ambassador Hotel and the Biltmore Hotel in Los Angeles during the years 1930 to 1943.  Then from 1944 to 1946 the awards ceremony was held at the Grauman’s Chinese Theater in Hollywood, followed by the Shrine Auditorium in Los Angeles from 1947 to 1948.  For one year in 1949 the ceremony took place at the Academy’s headquarters in Hollywood. Then, once again the venue changed to the Pantages Theatre and the awards ceremony took place there from 1953 to 1957 while it was televised simultaneously with an additional location in New York City. In 1961, the Academy Awards ceremony moved to the Santa Monica Civic Auditorium followed by another move of venue in 1969 to the Dorothy Chandler Pavilion at the Los Angeles Music Center.  Finally in 2002, the award ceremony found a permanent venue at the Kodak Theatre in Hollywood but the name of the building changed several times until 2012 when it was renamed the Dolby Theatre. 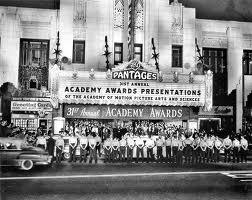 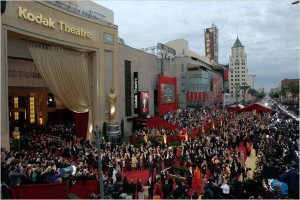 1 thought on “Celebration – The Academy Awards”