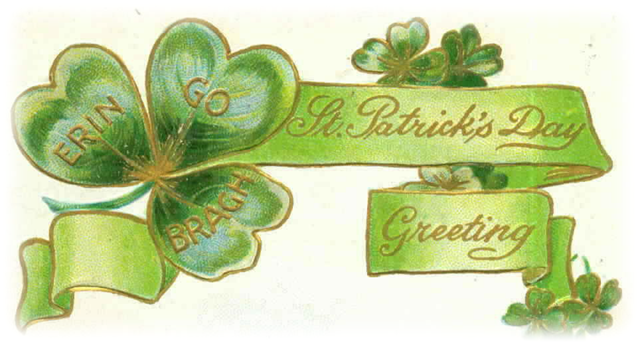 St. Patrick’s Day is celebrated on March 17; the anniversary of his death which became an official religious feast day in the early seventeenth century and over the years has become a cultural celebration of Ireland and the Irish people.  Some of the symbols, customs and traditions surrounding this celebration include: shamrocks, leprechauns, festive parades, eating corned beef & cabbage and wearing green so we won’t get pinched!

St. Patrick is the patron saint of Ireland and he was born in Britain in the fourth century to a wealthy family with a father who was a deacon.  At the age of sixteen, Patrick was taken captive by Irish raiders and sent to Ireland as a slave.    He was held somewhere on the west coast of Ireland and eventually returned to Britain and began his studies to become a priest.  Several years later he went back to Ireland as a bishop in an attempt to convert the pagan Irish to Christianity.  One famous legend told is that St. Patrick went to a hilltop (now known as Croagh Patrick) and with his wooden staff he banished all the snakes from Ireland.  This of course is a myth, since snakes were never native to Ireland, and it has become a metaphor for the conversion of the pagan Irish to Christianity.

The shamrock was a scared plant to the Celts in ancient Ireland it was a symbol of the rebirth of spring.  It is said that St. Patrick, in his teachings, used the shamrock to explain the Holy Trinity since the shamrock being a plant with three leaves represented the Father, Son and Holy Spirit.  By the seventeenth century, after the 1798 rebellion of the Irish against British rule, the Irish people began to wear the shamrock on their clothing as a symbol of their pride in their Irish heritage and their displeasure with the English rule.  Over the years this tradition became known as “the wearing of the green” and the association of the color green and St. Patrick’s Day has grown to represent Ireland.

The belief in leprechauns probably comes from the Celtic folktales of fairies or tiny people who used their magical powers for good over evil.  According to legend, leprechauns were responsible for mending the shoes of all the other fairies that paid them with coins that the leprechauns stored them in a hidden pot of gold at the end of a rainbow.  If the leprechauns were ever captured by a human, they would give them three wishes in exchange for their release.  Leprechauns were not originally associated with the celebration of St. Patrick’s Day.  In 1959, Walt Disney released a film, “Darby O’Gill and the Little People”, which featured a cheerful and friendly leprechaun so different from the cantankerous little man of the Celtic folktales.  It is this image of a leprechaun, a small little man with a beard wearing a hat and a green jacket, which quickly evolved into an image associated with the Irish and became a symbol of St. Patrick’s Day.

The celebration of St. Patrick’s Day was originally observed in Ireland as a religious feast day.  The day usually falls during Lent and Irish families would traditionally attend church in the morning and then celebrate in the afternoon.  The Lenten custom of not eating meat was waived and there would be dancing, drink and a feast of the traditional meal of Irish bacon and cabbage.  Unable to find Irish bacon in America, Irish immigrants living in New York City substituted with corned beef which was a cheaper alternative. 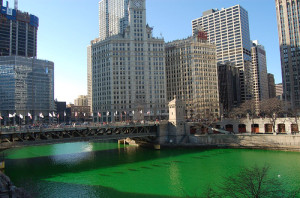 The first St. Patrick’s Day parade took place not in Ireland but in Boston in 1737.  Later in 1762, to celebrate and observe St. Patrick’s Day, a group of Irish soldiers serving in the British military marched through the streets of New York City and expressed their Irish pride through their music with bagpipes and drums.  Since that time, the Irish immigrates in America have held annual parades not only in New York City but also Boston, Chicago and Philadelphia.  On very unique tradition developed in Chicago when in 1962 city workers, in an attempt to control pollution and trace illegal sewage leaks, released green dye into the Chicago River.  This idea of dyeing the river has now become an annual event in celebration of St. Patrick’s Day.

St. Patrick’s Day is celebrated throughout the world and although the United States holds the largest events, other countries such as Canada, Australia, Japan and Russia have their own festivities.  In Ireland, the day has long been a religious holiday and until the 1970’s Irish laws dictated the closure of local pubs on March 17.  However in 1995, the Irish government began a national campaign to capitalize on the interest in St. Patrick’s Day as a way to showcase Ireland, Irish culture and to increase tourism.  Currently approximately 1 million people annually take part in Dublin’s St. Patrick’s Festival which has become a celebration over several days featuring parades, concerts and fireworks shows.