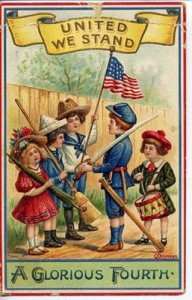 Fourth of July, also known as Independence Day, is a federal holiday which celebrates the United States declaring their independence from England.  This summer day is usually means fireworks and barbecues or a day for family picnics and a trip to see a baseball game.

Representatives from the thirteen colonies meet in Philadelphia, Pennsylvania during the American Revolution.  In June of 1776, the representative from Virginia, Richard Henry Lee, proposed that the Unites States declare their independence from Great Britain.  The Continental Congress voted to approve the resolution on July 2, 1776.  The representatives formed a committee of five members to prepare a Declaration of Independence.  The chief author of the document was Thomas Jefferson and over the next couple of days the Congress debated and revised the wording until finally approving it on July 4, 1776.  This is the day that Americans have come to celebrate.