This post is in honor of the 150th anniversary of the Battle of Gettysburg, which took place in July 1863.  We very fortunate to visit this historic Civil War site in 2008 and then again in 2009 when we made a trip to Philadelphia, PA.  When planning a trip to Gettysburg, we would recommend at least two days allowing a tour of the battlefield and visits to the places of interest in the area

We advise starting a visit at the Gettysburg National Military Park Museum and Visitor Center.  This is a great location to find out information about battlefield tours, ranger programs and maps; there is also a large bookstore and a small restaurant.  An entrance fee is required for the museum which has excellent displays on Gettysburg and the Civil War, the fully restored Gettysburg Cyclorama and the film “A New Birth of Freedom”.  Also available for a fee are shuttle buses that take visitor to the nearby Eisenhower National Historic Site. 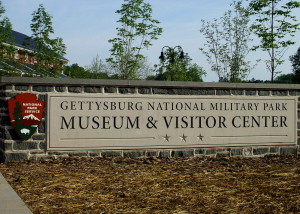 There are several different battlefield tours that can be arranged at the Gettysburg National Military Visitor Center.  There are two different tours that are available by Licensed Battlefield Guides for a fee; one is the traditional bus tour (which is offered seasonally) and a private personalized guided tour in your own vehicle.  There is a self-guide tour available and the pamphlet with map and information can be picked up at the Visitor Center.  Also, available for purchase in the Visitor Center bookstore is a audio tour CD.

Private personalized guided tour in your own vehicle –

A Licensed Battlefield Guide will tour the battlefield with you in the privacy of your own vehicle for approximately two hours and the historical information provided by the guides is excellent.  Guides are available at the Visitor center on a first come first serve basis starting at 8:00 a.m.  Guided tours can also be reserved in advance if a certain day or time is required. Check the NPS website for fees and additional information.

TRAVEL NOTE:  We booked this tour in advance the two different times we visited Gettysburg.  Both guides were very knowledgeable and we liked the idea that we could ask specific questions about the different aspects of the battle. 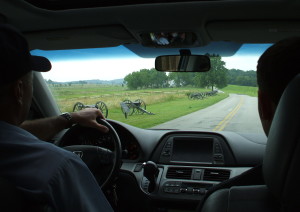 Available March through September, these tours are for visitors who prefer not to use their own personal vehicle in the park.  Please check the NPS website for time, fees and other information regarding the Guided Bus Tours.

A self-guided auto tour is available at the Visitor Center.  This tour will take visitors through the park with stops at important sites.  There is no charge for this tour, it is free to visitors.

The Audio Tour CD is available for purchase in the Visitor Center bookstore.  The tour will give detailed descriptions of the battlefield as narrated by the Battle of Gettysburg historians.

In the late 1800s a very popular form of entertainment was the Cyclorama, which were very large oil paintings on canvas that were displayed with enhanced landscaped foregrounds that included trees and shrubs and sometimes music or appropriate sounds would be included.  Visitors would stand on a raised platform to look at the unique three-dimensional effects and it would seem as if they had entered into the center of some epic scene.  When the cyclorama went their popularity died out, many of the large canvases were lost or destroyed. 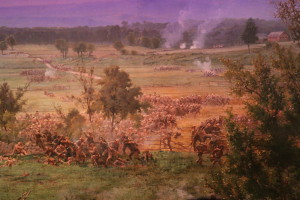 The “Battle of Gettysburg” Cyclorama on display at the Gettysburg Nation Military Park Visitor Center brings to life the dramatic final Confederate assault that took place on July 3, 1863.  The canvas was painted by a professional cyclorama French painter, Paul Philippoteaux.  He arrived in Gettysburg in 1882 and toured the battlefield with his sketchbook observing the details of the terrain and even interviewed veterans who were at the battle which offered their suggestions on how depict the chaos of the battle.  It took Philippoteauz over a year to complete the project and the work opened to the public in Chicago in 1883 and he painted a second version which went on display in Boston in 1884.

Twenty years later the Boston cyclorama was for sale and a Gettysburg entrepreneur purchased the large canvas and foreground props.  Repairs were made and opened to the public in Gettysburg in 1913 on the 50th anniversary of the Battle of Gettysburg and it remained on display for forty years.  In the late 1940s, the National Park Service purchased the painting and moved it to the newly constructed visitor center in 1962.  The Gettysburg Cyclorama is 377 feet long, 42 feet high and weighs 12.5 tons.

Then in 2003, the Gettysburg Cyclorama underwent a thirteen million dollar renovation.  After the work was completed the cyclorama was moved to the new Gettysburg National Military Park Museum and Visitor Center where it is displayed in its own viewing auditorium.  The painting and restored foreground were opened for visitors on September 26, 2008 during the grand opening of the new visitor center.

For visitors interested in historic sites, we would suggest a quick visit to the Soldiers National Cemetery.  The Cemetery was dedicated on November 19, 1863 and is the place where President Abraham Lincoln delivered the famous Gettysburg Address.  He was not the featured speaker that day and his speech was only two minutes long.  Near the entrance to the Cemetery there is a large memorial to commemorate Lincoln’s Gettysburg Address but the actual site of the speech is farther inside the Cemetery grounds, look for a large plaque near the spot along the fence.  Also located on the path near the spot is a memorial commissioned by the state of Kentucky for their native son, visitors leave pennies as a tribute to Lincoln.

Travel Tip: Before visiting the Cemetery pick up a walking tour pamphlet which is available at the park information desk at the Gettysburg Visitor Center, which is located within a short walking distance from the Cemetery. 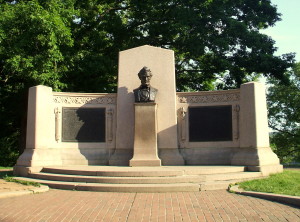 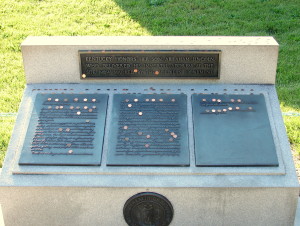 There are so many things to see and places to visit at Gettysburg.  Memorials and statues are scattered around the battlefield and the surrounding area.  There are books available in the Visitor Center bookstore that give the different locations and description of each of the memorials and statues – I’m sure visitors could spend hours just driving throughout the area to see them all! 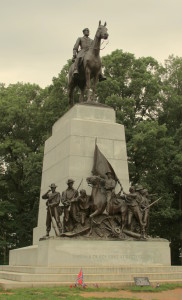 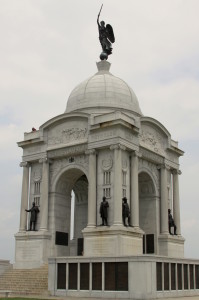 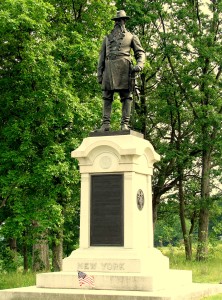 Visitors visiting Gettysburg with children should make a stop at the Visitor Center to get the Junior Ranger program information.  This is a great way to keep the children occupied during their visit while they are accompanying their parents on the battlefield or visitor/museum complex.  It is a great way for them to learn about the history of Gettysburg and the Civil War. 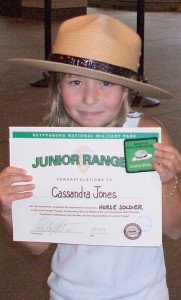 The Headquarters of General Lee

Located near the town of Gettysburg is the historic building that General Lee and his staff occupied during the Battle of Gettysburg.  There is a small museum which explains the history of the house and several displays of a private collection of Civil War memorabilia.  The building is open mid March to November with extended summer hours and there is an entrance fee required.

When President Lincoln came to Gettysburg for the dedication ceremony of the Soldiers National Cemetery, he arrived by train from Washington, D.C. and stopped at the Willis house, which was located near the train station.  The Willis House opened to the public in 2009, house tours are offered.  Visitors will see the office of David Wills, an attorney at the time of the Battle of Gettysburg, who received many letters from families looking for their loved ones and this prompted him to organize the plans to build the National Cemetery.  Also the bedroom where Lincoln stayed the night before the Cemetery dedication putting the finishing touches on his Gettysburg Address.

A unique tour of Gettysburg to take for adults and older children is one of the Ghost Tours that booked through private tour companies.  These tours have become very popular of the years and offer a different perceptive of the Battle of Gettysburg.  My husband and son took one of these tours on a night of a full moon and had a great time!

A Brief History of the of Gettysburg

The Battle of Gettysburg took place July1 to 3, 1863 during the Civil War and it is considered by many historians to be the largest battle ever fought on American soil.  On the Union side there were 85,000 men of the Army of the Potomac under the command of Major General George Meade and for the Confederacy there were approximately 75,000 of the Army of Northern Virginia which were led by General Robert Lee.

On July 1, Confederate forces approached the town of Gettysburg from the west and the north.  They drove the Union soldiers back through the streets of town to Cemetery Hill.  During the night, both Confederate and Union soldiers arrived as reinforcement.

On July 2, General Lee attempted to engage the Union first by striking them on the left flank at the Peach Orchard, the Wheatfield, Devil’s Den and Round Top involving the Longstreet and Hill divisions.  Then they attacked the Union on the right at Culp Hill and East Cemetery Hill.  By nightfall, the Confederate had gained the ground at Little Round Top. 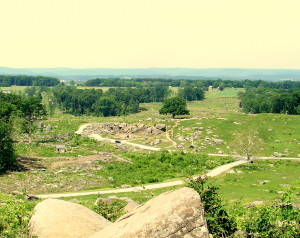 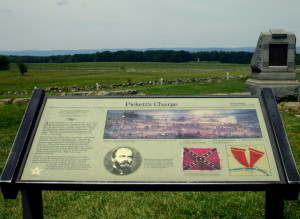 During the morning of July 3, the Confederate infantry was driven from their hold on Culp’s Hill.  Then in the afternoon, General Lee’s troops attacked the Union center on Cemetery Ridge.  In an iconic assault which became known as “Pickett’s Charge, the Confederates momentarily broke through the Union like but were driven back with severe casualties.  Later, Stuart’s cavalry attempted to gain the Union rear but they were prevented from completing the maneuver.

The next day, General Lee withdrew his army and moved them away from Gettysburg and toward the Potomac River.  After the battle, the town of Gettysburg was devastated; public buildings and private homes were filled with wounded soldiers and the area surrounding the town were filled with both the Union and Confederate soldiers who died in the three day battle.  Gettysburg residents became concerned with the poor condition of the soldier’s graves scattered over the battlefield and months after the Soldiers National Cemetery was established and dedicated on November 19, 1863.