The Bracebridge Dinner is a lovely holiday tradition that is held annually in Yosemite National Park every Christmas season.  The first Bracebridge took place back in 1927 and is still currently being held over 85 years later in the Yosemite Valley at the world renowned Ahwahnee Hotel.  Every year the grand dining room of the Ahwahnee is transformed into an 18th century English manor that is inspired by a 1822 Washington Irving story, “Bracebridge Hall” as told in his book “The Sketchbook of Geoffrey Crayon, Gent”.  (Irving is also famous for another story called “The Legend of Sleepy Hollow”, and please click on the link for more information about that classic tale about the headless horseman)

The Bracebridge Dinner is a three hour pageant of theatrical and musical performances that includes a seven-course formal dinner.  The tradition was started by Don Tresidder, president of the Yosemite Park and Curry Company, to celebrate the first Christmas after the majestic Ahwahnee Hotel was opened in 1927.  The character of the Squire Bracebridge was played by Tresidder himself, the character of Lady Bracebridge was played by his wife Mary Curry and Ansel Adams (the famous photographer) played the court jester. 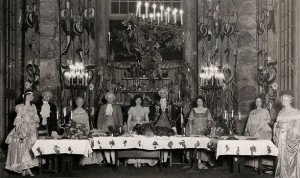 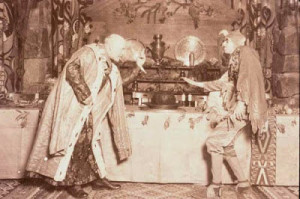 The Bracebridge was been held annually since 1927 with the exception of the years during World War II when the Ahwahnee Hotel was commissioned by the United States government for use as a Naval Hospital.  When the tradition resumed in 1946 several new chorale musical performances were added.  Then shortly after the 1948 Bracebridge, Don Tresidder died of a sudden heart attack.  Heartbroken at the loss of the prominent Yosemite resident there was much debate over whether the show would even continue or the possibly of eliminating the role of the Squire since the part had always been played by Tresidder.  It was finally determined that the character of the Squire would remain in the show but over the years the part of the Squire as narrator was eventually reduced to a smaller role. 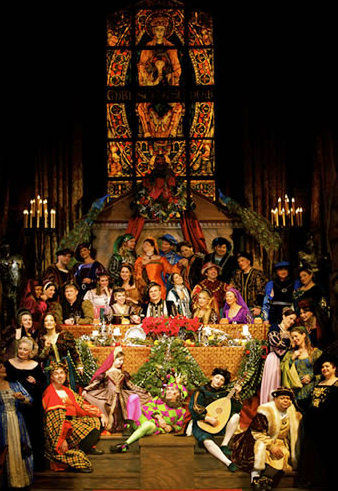 Throughout the years, Ansel Adams went on to serve as the production’s musical director and later the part of Major Domo, the head of the Bracebridge household, was created especially for him and the part of the housekeeper was played by his wife Virginia Best Adams. Adams also served as the musical director and official photographer and he still continued performing in the Bracebridge until his retirement in 1973.  Eugene Fulton, who had been a member of the male chorus since 1934, took over as musical director in 1946 and after Adams retirement he became the producer of the show.  Sadly, Fulton died suddenly on Christmas Eve in 1978.  His wife, Anna Marie and his daughter, Andrea took over the production of the Bracebridge for the remaining performances that year.  Eventually Andrea went onto to become the show’s director as well as playing the role of the housekeeper.  Finally, in 2013 the lottery process which had been previously used to obtain tickets for the popular Bracebridge Dinner was eliminated and now reservations are accepted in the order in which they are received. 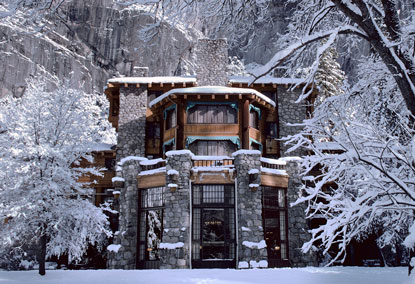 The history of the Ahwanhee Hotel

The Ahwahneechee Native Americans had long settled in the area when the Mariposa Battalion, a California militia group, entered the Yosemite Valley in 1851 to fight in the Mariposa War caused by the 1849 California Gold Rush.  Shortly after, white settlers arrived to build homes and visitors came to enjoy spectacular views of El Captain, Half Dome and Yosemite Falls.  In 1864, President Abraham Lincoln signed a federal bill in 1864 granting the Yosemite Valley and the Mariposa Grove to State of California.  John Muir, a local naturalist with concerns for the protection of the environment, eventually lobbied for the creation of the Yosemite National Park which happened in 1890.

Visitors continued to be drawn to the beauty of Yosemite National Park and the demand for tourist accommodations steadily increased throughout the years.  In 1899 David and Jennie Curry arrived in the Yosemite Valley and soon developed several rustic cabins and campsites that became known as Curry Village.  Then, in 1917, the Yosemite Lodge was built near the base of Yosemite Falls and was the first of the Park’s traditional hotel style accommodations.

By the early 1920s, there was a need for more luxurious accommodations for the more wealthy and affluent tourists.  The Ahwanhee Hotel took eleven months to construct, cost over one million dollars to build and opened in July 1927.  It is a wonderful example of rustic elegance built in an Arts & Craft style of architecture which was very popular at the time.  It is constructed of 5,000 tons of granite, 1,000 tons of steel and 30,000 feet of wood and furnished with a unique blend of Art Deco and Native American decorating styles.

The Great Lounge of the Ahwanhee is 77 feet long and 51 feet wide with 24 foot high ceilings.  Other features of the room include 10 floor-to-ceiling windows topped by beautiful stained glass panels and there is also a massive stone fireplace with couches, chairs and tables that offers an inviting place for visitors to gather.  The room is decorated with Native American hand-woven baskets and massive wrought iron chandeliers. 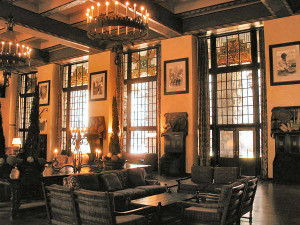 Other public rooms of the Ahwanhee include the Solarium which has massive windows on three sides of the room that have lovely views across the valley with Glacier Point in the distance.  (This area room is often used for wedding ceremonies and receptions as well as other special events)  The Mural Room is beautifully decorated with an impressive mural showing the various flowers and plants of Yosemite Valley.  The room is elegantly paneled in wood with a copper-hooded fireplace and French doors that open onto a patio and the nicely landscaped grounds. 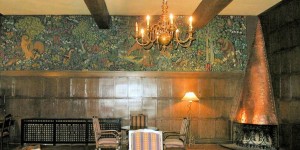 One of the most impressive rooms of the Ahwanhee is the grand Dining Room which is 130 feet long, 51 feet wide and features a 34 foot ceiling supported by wooden beams made from sugar pine and supported by large granite stone columns, there are also floor-to-ceiling windows framed with stained glass panels.  The Ahwanhee Dining Room offers visitors the finest dining within Yosemite National Park and a more formal dress code is required.  (This room is where the annual Bracebridge Dinners are held during the Christmas season)

During World War II, the Ahwahnee Hotel was commissioned by the United States government for use as a Naval Hospital.  The famous Bracebridge Dinner was not held during that time and eventually the tradition resumed in 1946.  Over the years, the Ahwanhee added an outdoor swimming pool and modernized the hotel with elevators and a fire alarm system including smoke detectors and a sprinkler system. 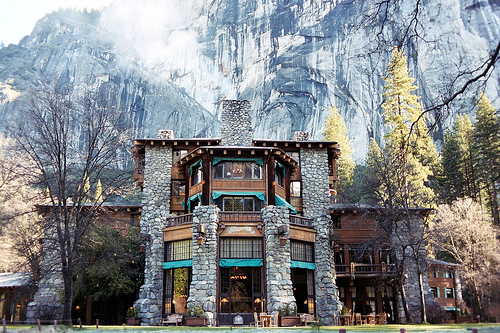